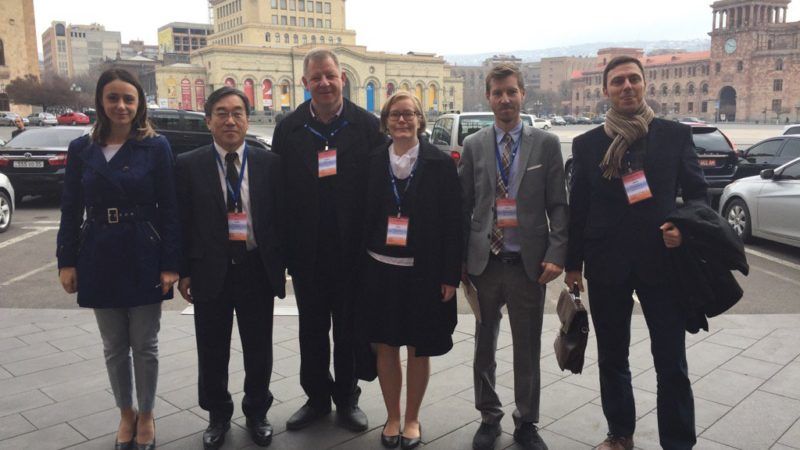 The International team of election observers from Sweden-Japan-Lithuania starting their mission. [@PetrikasE/Twitter]

European observers said yesterday (3 April) there was “credible information” that Armenia’s parliamentary elections at the weekend were marred by “vote-buying” and pressure on voters.

The elections won by the pro-Russian ruling Republican Party “were tainted by credible information about vote-buying, and pressure on civil servants and employees of private companies”, observers from the OSCE, the Council of Europe, and the European Parliament said in a joint statement following Sunday’s polls.

Armenia’s ruling party was set to win the first parliamentary elections since the adoption of constitutional reforms transforming the country into a parliamentary republic, according to official results released today (3 April).

The observers noted however that the polls “were well administered and fundamental freedoms were generally respected.”

The most influential and professional media accounts of #Armenia suspended in Twitter just before #armvote17. @Support pic.twitter.com/ol03vNAcjg

The central electoral commission said on Monday that the Republican Party beat the main opposition coalition, led by wealthy politician Gagik Tsarukyan, by 49.15% to 27.37%.

Another opposition coalition, Elk, and the Dashnaktsutyun nationalist party received 7.78% and 6.58% of the vote respectively, and will also enter the parliament.

by far, the most impressive election observer; and with so many "jokers" as candidates, he fits right in#armvote17 pic.twitter.com/dc4pfQrMds

The West views Armenia’s election as a key democratic test for the landlocked nation of 2.9 million, which has no history of transferring power to the opposition through the ballot box.

Pro-Russian President Serzh Sargsyan, who heads the Republican Party, has said his government “made enormous efforts so that (the) milestone vote is flawless”.

Violence flared following his election in 2008, with ten people killed in clashes between police and opposition supporters.

But opposition politicians have reported violations at polling stations after having alleged before the vote that the government was preparing mass electoral fraud.

“We have recorded numerous violations at polling stations – violation of ballots’ secrecy and multiple voting,” Hovsep Khurshudyan, a leader of Ohanyan-Raffi-Oskanyan, an opposition coalition, told AFP on Sunday night.

The polls followed constitutional amendments initiated by Sargsyan in 2015 that his opponents say are designed to perpetuate the rule of the Republican party, which has been in power for the last two decades.

The amendments will shift the country away from a strong presidency to a parliamentary form of government after Sargsyan’s second and final term ends in 2018.

The opposition says the changes were made to allow Sargsyan, 62, to maintain his grip on power by remaining party leader after he steps down as president.

Sargsyan denies that, saying the changes are “part of Armenia’s democratisation process”.

Ahead of the vote, Sargsyan told AFP he would remain “active” in politics after he left office by remaining the leader of his party.

“As chairman of the Republican Party, I assume responsibility for my teammates,” he said when asked about his post-2018 future.

Both ruling and opposition parties had campaigned on populist promises such as “jobs, wages, pensions”, Gevorg Poghosyan, a pollster at the Armenian Sociologists’ Association, told AFP.

“That’s what matters to the voters” in a country where about 30% of the population live under the official poverty line, he said.

Opposition coalition leader Tsarukyan had built his campaign on lavish promises to cut tariffs on natural gas and electricity and hike public-sector salaries and pensions. He has accused the government of failing to address poverty and endemic corruption.

Five parties and four electoral blocs ran in Sunday’s vote, with 101 parliamentary seats up for grabs under a system of proportional representation.

A party needs to clear a 5% threshold to be represented in parliament, while an electoral bloc – an entity made up of several parties – needs to garner at least 7% of the vote.