A handout photo made available by the German Federal Government showing Germany's Chancellor Angela Merkel greeting French President Francois Hollande during his arrival at the Chancellery in Berlin, Germany, 08 May 2017. [Guido Bergmann / EPA]

Chancellor Angela Merkel greeted him warmly at the entrance of the Chancellery before they enjoyed a private conversation and dinner in the city, sealing an unlikely friendship struck up between a German conservative and a French socialist.

While they came from “very different political families,” Merkel said earlier Monday, “I enjoyed working with Francois Hollande,” with whom she “built up mutual trust” over his five years in office.

During his return flight to Paris, Hollande said “the Chancellor wanted to pay tribute to what we had done together during the euro crisis, on Greece, Ukraine and the climate – so many events that brought us closer together.”

The pair first met on 15 May, 2012, the same day Hollande was inaugurated.

Hollande persisted in meeting Merkel that day, despite the French presidential plane being forced to turn back once, after it was struck by lightning when departing from Paris.

During their first encounter, Merkel helped walk the freshly-minted head of state through the steps of the formal red-carpet welcome at her modernist headquarters in central Berlin, at times guiding him by the arm.

It was the Ukraine crisis which forged the two into a proper team. 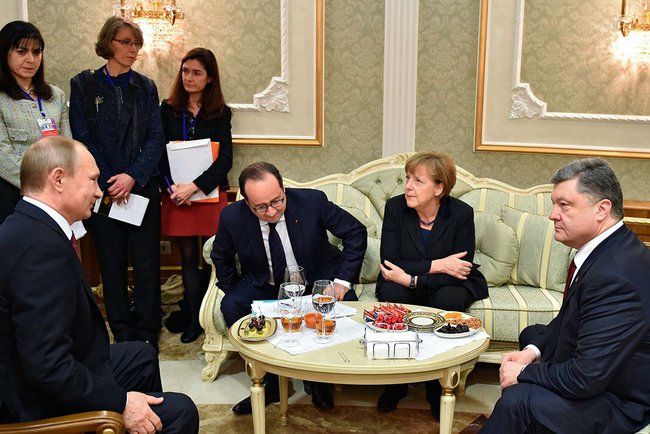 In June 2014, they brought Russian President Vladimir Putin and Ukraine’s leader Petro Poroshenko together for talks on the sidelines of 70th anniversary commemorations for Operation Overlord, the massive World War II amphibious assault against Nazi-occupied France.

Before and after Ukraine crisis

“There was a before and after” that summer’s meetings in the Hollande-Merkel relationship, people close to the president said.

“Working on a subject that was neither bilateral nor linked to the European Union changed the climate of their meetings and the extent to which they were partners, which went on to show itself during the Greece crisis and the migrant crisis,” the same source said.

One of the best-known images of their partnership came at a darker moment, as Merkel laid her head against Hollande’s in a gesture of empathy after terrorist attacks against satirical magazine Charlie Hebdo and a Paris kosher supermarket in 2015.

Such personal closeness meant that “economic differences, namely France’s structural budget deficit and Germany’s trade surpluses, could always be overcome politically” between the two, the source close to Hollande said.

Macron, brought into politics by Hollande, first as a powerful advisor and later as economy minister, will, like his predecessor, make Berlin his first port of call after his inauguration on Sunday.

Merkel on Monday praised the 39-year-old, who will be France’s youngest-ever president, for the “courageous pro-European campaign” he waged successfully against far-right nationalist Marine Le Pen.