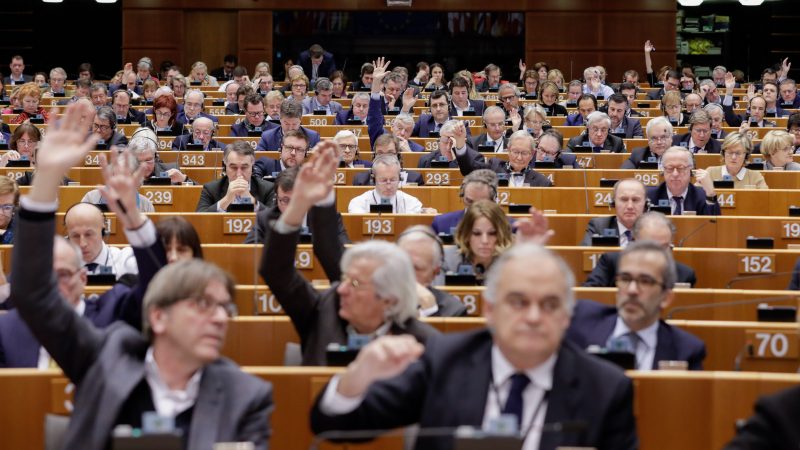 A compromise struck between the EU's largest could now pave the way for pan-European MEPs and further European integration. [EPA-EFE/STEPHANIE LECOCQ]

*This article was changed to reflect input from sources

The biggest EU party families have agreed on a compromise to push for a change of EU electoral law allowing for pan-European members of the European Parliament, which could further European integration if successful.

The compromise to have a total of 28 pan-European MEPs was crafted by the conservative European People’s Party (EPP), the left-wing Socialists & Democrats (S&D), the liberal Renew Europe and the Greens/EFA, who together have a comfortable majority in the European Parliament.

“We have a deal!” tweeted Damian Boeselager, who was elected on a ticket of the pan-European party Volt in 2019 and belongs to the Greens/EFA. He added that the deal between the “four largest groups in the European Parliament” was “one of the most important moments” in his career.

We have a deal! On the electoral law between 4 largest groups in EP!

🇪🇺 28 MEPs elected via pan-European vote for all EU citizens❗️

The so-called pan-European vote will create a second vote on ballots possibly as early as 2024’s election, where voters may be able to vote for a national party as well as cast a second vote “for European parties with the same program and candidates” across all of the EU, he notes.

Consequently, the 705 MEPs elected through a regressive allocation of seats based on the size of EU state populations could be joined by 28 additional colleagues who the European public will elect.

“This keeps it open to new European parties to develop!” lauded Boeselager, highlighting the push as a chance for his own Volt party, but also the largely diminished European Pirates and other fringe parties like the Democracy in Europe 2025 movement.

Parties that want to run to have one of their own elected via a pan-European vote must either have a female quota of 50% or be “zippered,” which means men and women are listed alternatingly.

Imposing such a requirement may conflict with the electoral neutrality principle. Boeselager had “doubts for the law” to include a quote/zipper requirement because of “the neutrality of elections,” he notes, but has told EURACTIV that the Greens are in favour.

All parties, but the EPP had pushed for quotas or “zipper” lists, a source closely familiar with proceedings said.

The big parties also used the law compromise to send a signal to national governments.

While the compromise voting age of 16 “is rather symbolic as national provisions still apply,” Boeselager considers it is going in the right direction.

Having younger citizens vote in elections is generally considered beneficial for left-wing parties, as many young voters tend to vote for the Greens, the socialists and the liberals.

In the German federal election of 2021, the business-friendly liberal FDP had almost double the vote share with younger voters than its overall result, while the Greens performed more than 5% better in vote share amongst the young relative to their overall result.

All parties agreed to set the age to stand as a candidate at 18, which undercuts the age requirement to stand for election in Italy and another twelve EU states.

Yet the “worst part” of the compromise is an electoral threshold exclusive to Germany. Parties putting up pan-European candidates must achieve 3.5% of the vote in Germany to have them count, something Boeselager “strongly” opposes.

The troubles with Germany are unlikely to end there, as neither the German executive sitting in the Council nor the German constitutional court is likely to welcome such a selective threshold clearly designed to curtail the weight of the German population in the pan-European vote.

In two decisions (2011 and 2014), the German Constitutional Court in Karlsruhe had declared the country’s existing thresholds for EU elections (5 %, then 3 %) to be unconstitutional, writes the EP’s research service.

The compromise negotiated by Sven Simon on behalf of the EPP, Domenec Devesa of the S&D, Guy Verhofstadt for Renew and Boeselager for the Greens is now facing a rocky process before it becomes anything resembling law.

First, the compromise struck must pass through the European Parliament’s Committee of Constitutional Affairs (AFCO), then receive a majority in the EP’s plenary voting session before surviving the Council, which in the past had done its best to stall any changes to EU electoral laws.

“This is crucial – but still only the beginning. Next come votes in committee and plenary, before the countries butcher our draft,” explains Boeselager.