Farage appeared with Trump before a cheering crowd of thousands at a rally in Jackson, Mississippi. Farage partly based his Brexit drive on opposition to mass immigration to Britain that he said was leading to rapid change in his country.

His appearance came as Trump sought to moderate his own hardline stance against illegal immigration. In remarks broadcast on Wednesday, Trump backed further away from his vow to deport millions of illegal immigrants, saying he would be willing to work with those who have abided by US laws while living in the country.

Trump summoned Farage on stage in the middle of his appearance, shook his hand and surrendered the microphone to him.

Farage said he would not actually endorse Trump because he did not want to repeat what he called President Barack Obama’s meddling in British affairs when Obama urged Britons to vote to stay in the EU.

“I cannot possibly tell you how you should vote in this election. But you know I get it, I get it. I’m hearing you. But I will say this, if I was an American citizen I wouldn’t vote for Hillary Clinton if you paid me,” Farage said.

“In fact, I wouldn’t vote for Hillary Clinton if she paid me,” he added.

Trump has sought to align himself with the Brexit movement, noting he had said before the 23 June referendum that Britons should vote to leave. He visited one of his golf courses in Scotland the day after the vote and boasted that he had predicted the outcome and called it a sign his own campaign would be successful.

Trump has since tumbled in national opinion polls and is fighting to remain competitive with Democratic rival Clinton with little more than two months to go until the 8 November election.

“November 8 is our chance to redeclare American independence,” Trump said, borrowing a phrase Farage used during the Brexit campaign.

Farage drew parallels between the Brexit movement and the support Trump has received from many Americans who feel left behind by Washington.

EXCLUSIVE / Breaking with tradition, the centre-right European People’s Party (EPP) said it was reluctant to support Republican candidate Donald Trump in the US presidential race because of his rejection of strong ties with the EU, EURACTIV.com has learned.

“They feel people aren’t standing up for them and they have in many cases given up on the whole electoral process and I think you have a fantastic opportunity here with this campaign,” he said.

Trump’s comments on immigration came in the second part of an interview conducted on Tuesday (23 August) with Fox News anchor Sean Hannity. They signaled a further softening in his immigration position as he tries to bolster support among moderate voters and minority groups.

Trump, who defeated 16 rivals for the Republican presidential nomination in part based on his opposition to illegal immigrants, said he would not permit American citizenship for the undocumented population and would expel lawbreakers.

To qualify to remain in the United States, Trump said, illegal immigrants would have to pay back taxes. 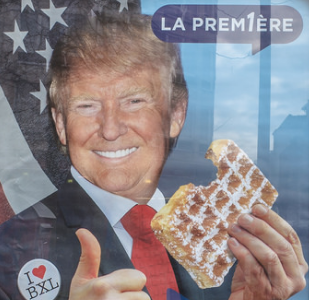 “But when I go through and I meet thousands and thousands of people on this subject, and I’ve had very strong people come up to me … and they’ve said: ‘Mr. Trump, I love you, but to take a person who’s been here for 15 or 20 years and throw them and their family out, it’s so tough, Mr. Trump,'” Trump said. “It’s a very hard thing.”

Trump said he would outline his position soon.

“Well, I’m going to announce something over the next two weeks, but it’s going to be a very firm policy,” Trump told WPEC, a CBS affiliate in West Palm Beach, Florida.

Trump’s new position seemed to resemble in some respects the failed 2007 reform push by former Republican President George W. Bush. That effort offered a way to bring millions “out of the shadows” without amnesty and would have required illegal immigrants to pay a fine and take other steps to gain legal status.