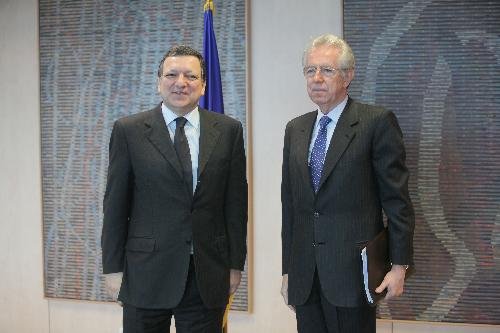 After talks with the new Italian Prime Minister Mario Monti, Commission President José Manuel Barroso said he was confident that Italy would deliver the needed structural reforms to balance the budget.

Speaking following his first meetings in Brussels since taking office, Monti said he was convinced his new government can push ahead with more ambitious reforms than its predecessor but declined to confirm that it will balance its budget in 2013.

Monti added he was determined to win back investor confidence after Italy's short-term borrowing costs surged to levels seen as unsustainable, striking the 17-nation eurozone to its core.

"We can get to the bottom… to the heart of structural reforms in Italy," Monti said, flanked by European Commission President Jose Manuel Barroso.

Barroso said there are "no miracles" in financial markets and Italy will have to run a "marathon" of reforms to win back credibility about its government debt. "The situation remains difficult for Italy,"  Barroso said.

These measures aim to balance the budget in 2013 and halt the rise in Italy's debt, which is already around 120% of gross domestic product. Monti said that the reform plan also aims to tackle tax evasion, a national plague in the eurozone's third-largest economy, and contains "ambitious" pension reform plans.

Monti has secured huge support from a parliament spooked by a sudden jump in Italian borrowing costs, but he could face a battle as he tries to win backing for greater austerity or to implement a pledge to liberalise the economy.

The European Central Bank has been sporadically buying Spanish and Italian government bonds to prevent prices spiking to unaffordable levels, but the limited, stop-go purchases have failed to provide durable relief.

Under Berlusconi, opaque pledges and a lack of detail on measures to speed up deficit reduction undermined investor confidence that the country has yet to regain.

No specifics from Monti

Monti, a former EU competition commissioner who favours greater European integration, evaded questions about his economic plans, and said his talks with Barroso were very general, particularly on budget issues.

Asked specifically about whether Italy would achieve a balanced budget for 2013, Monti said: "We didn't get into that in specific terms with President Barroso."

"We discussed it only in general terms for the European Union, and not for Italy," he said. "That was the issue of whether you need to take into account the economic cycle in determining how (countries) do in meeting their objectives."

Monti, who also met the President of the European Council, Herman Van Rompuy, said that his new government was focused not only on fiscal discipline but also on boosting economic growth.

"There will be a strong element of continuity as regards Italy's fiscal consolidation efforts," he said. "But there will be more attention paid to growth."

Italy's mix of chronically low growth, a public debt mountain of €1.84 trillion, or 120% of GDP, and a struggling governing coalition are causing growing alarm on financial markets.

The country, which has been politically unstable for years, would need at least €600 billion in the case of a bailout, more than the balance of the eurozone's current bailout fund.

However, doubts remained over the government's ability to implement these austerity measures. Earlier this month, the European Commission revised Italy's economic forecasts downward when it published its biannual projections for the EU and the eurozone (10 November). This hinted at the fact that Italy needed to adopt new austerity measures.