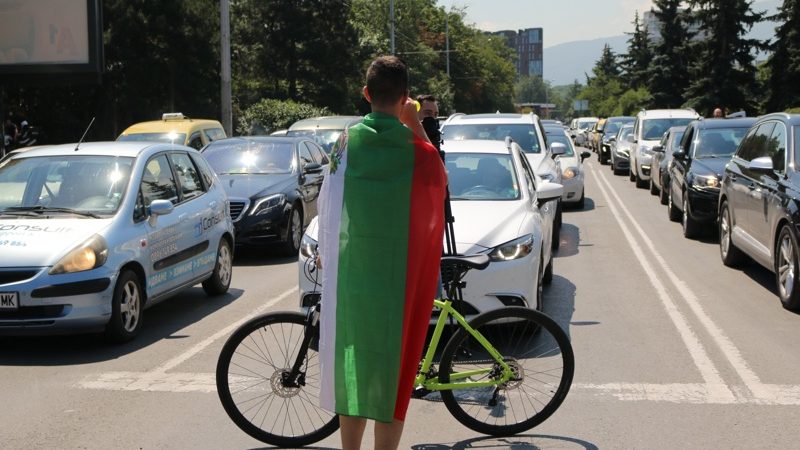 A boy mantled with a Bulgarian flag blocks a crossroads in Sofia. [Mediapool.bg]

Protests in Bulgaria against the government of Boyko Borissov grew stronger on Wednesday (29 July), the 21st day of revolt, as citizens blocked major crossroads, including a key Danube bridge at the country’s border with Romania at Russe-Giurgiu.

Protests in Sofia and other big cities are gathering steam despite repeated statements by Borissov that he does not intend to resign, and attempts to improve the government’s image by replacing ministers and releasing huge state funds to various categories of workers and pensioners.

In recent days, the protestors have resorted to blocking major crossroads in Sofia. For the first time on Wednesday, traffic on the Danube bridge at Russe-Giurgiu was repeatedly interrupted. This bridge is a key part of a transport corridor from Istanbul to the north of Europe.

Another group of protestors blocked another key element of the international truck transport corridor – the Pass of the Republic, a mountain pass in the Balkan Mountains connecting Veliko Tarnovo and Gurkovo.

In messages on Facebook, Borissov called on protesters not to upset normal life by blocking crossroads and even said that they had “better burn down” his government villa instead of disrupting traffic.

Protestors say they blame Borissov for presiding over a mafia state. They also call for the resignation of the prosecutor general Ivan Geshev, seen as an instrument for instigating fear and preserving the status quo.

Another voice recording leaked on Wednesday added more fuel to fire. A voice recognisable as Borissov’s utters a series of obscene insults against President Rumen Radev, an open critic of Borissov who has the support of the majority of the protestors.

Although present in big numbers, the police are keeping a low profile after incidents from the initial phase of the protests, when young protestors were beaten by policemen in Sofia.

Arman Babikyan, one of the organisers of the protests, said on Wednesday the manifestation would last “months if necessary” – until Borissov resigns.

Borissov retorted by saying that Babikyan, a public relations expert, had previously come to him proposing a 3.5 million project (he did not specify whether it was in euro or leva) to support his election campaign.