Bulgaria’s Socialists hope Sunday (26 March) to win power and end years of dominance by karate-kicking former premier Boyko Borissov, in elections that could tilt the EU and NATO member more towards Russia.

The third election in four years in the European Union’s poorest country could also see the nationalist United Patriots emerge as the third-biggest party and kingmaker in tough coalition talks.

Opinion polls put the centre-right GERB party of ex-fireman Borissov neck-and-neck with the Socialist Party (BSP) on between 25 and 31%.

Some analysts distrust the polls, saying that many voters are fed up with Borissov, 57, and may hand him a much worse result.

“There is always a great surprise in each elections here and maybe this time it will be a catastrophic loss for Borissov,” analyst Evgeni Daynov told AFP.

Once a bodyguard for Bulgaria’s last communist leader, Borissov was prime minister between 2009 and 2013, and again from 2014 and 2017. In between the BSP were in power for barely a year.

On both occasions the burly Borissov threw in the towel before his term was up, the first time after mass protests against poverty and corruption and most recently last November.

This was a major success for Kornelia Ninova, 48, who has energised the BSP base since becoming its first female leader last year.

Bulgaria’s Socialist Party (BSP), the biggest opposition party in the Balkan country, chose a new leader yesterday (8 May) with the task of winning back disaffected voters and pushing for an early general election.

If Ninova can become premier, this raises the prospect of Bulgaria, which has long walked a tightrope between East and West, drifting more towards Moscow.

Ninova has lashed out at Brussels, saying she is not content with Bulgaria being a “second-class member” of the EU and that she will veto an extension of sanctions on Russia.

She also said she is ready for the post of prime minister.

In the last few years, the Patriots have supported Borissov’s minority government without asking for ministerial posts. The European Peoples’ Party (EPP) to which Borissov’s GERB party is affiliated wouldn’t like to see the Patriots in open coalition with him.

Russia, with which Bulgaria has close cultural and economic ties, has also been accused of seeking to expand its influence in other Balkan countries in recent months.

Ninova has promised to veto the continuation of EU sanctions against Russia if she takes office, as in her words they hurt the Bulgarian economy and have proven to be ineffective.

“No one thinks Bulgaria is about to leave the EU or NATO,” said political scientist Antony Galabov.

“But it risks becoming a representative for outside views and to become a Trojan Horse within these organisations.”

But the more pro-EU Borissov has also said that he wants more “pragmatic” ties with Russia and to revive two joint projects – a controversial gas pipeline and a nuclear plant.

Bulgarian Prime Minister Boyko Borissov paid a visit to the European Commission today (12 January) to sound the alarm over his country’s energy resources, following the freezing of the South Stream project. In particular, he warned that if Russia drags its feet over the rehabilitation of Bulgaria’s two nuclear reactors, this would be a “catastrophe” for the country.

Forming a coalition will be difficult for either Borissov or Ninova, however, with as many as seven parties expected to have seats in a fragmented new parliament.

Both leaders have ruled out a tie-up with the main MRF party representing Bulgaria’s Turkish minority, expected to garner between eight and 11% of the vote.

A new political party ‘DOST’ (‘friend’ in Turkish), was recently set up, led by Lyutvi Mestan, former leader of the DPS party (Movement for Rights and Freedoms) which historically represented ethnic Turks in Bulgaria. DOSR, which is widely perceived as a political project designed by Ankara, will for the first time test its influence.

Bulgaria’s caretaker prime minister said on Friday he was taking steps to prevent any attempts by Turkey to influence an election next week in favour of a political party that represents Bulgarian Turks, the country’s largest ethnic minority.

This leaves the United Patriots, which could leapfrog the MRF into third place.

Another potential partner is Veselin Mareshki, 49, a populist who likes being called the Bulgarian Donald Trump with promises to turn politics upside down and help the poor.

Mareshki owns a chain of petrol stations and pharmacies and succeeds in selling fuel and medicines at prices well below the rest of the competition.

But many voters remained undecided amid widespread apathy in a country where the average monthly wage is just €500 even after a decade of EU membership.

“I will back neither Borissov nor his opposition Socialists. I do not believe them any more. I did not see any of their pledges materialising,” teacher Tsvetomira Tosheva, 47, said in Sofia.

“I would rather vote for any of the new and still uncompromised faces, for some change, hoping it will bring something good.”

Bulgaria will take over the rotating presidency of the Council of the EU from 1 January 2018. Some commentators say that for the sake of the US stint, the country’s politicians should better agree a large coalition for a period of two years, and hold early elections in 2019.

Bulgaria has yet to nominate a Commissioner. The country has been without a Commissioner since 31 December, after Commission Vice-President Kristalina Georgieva resigned to take a job at the World Bank. 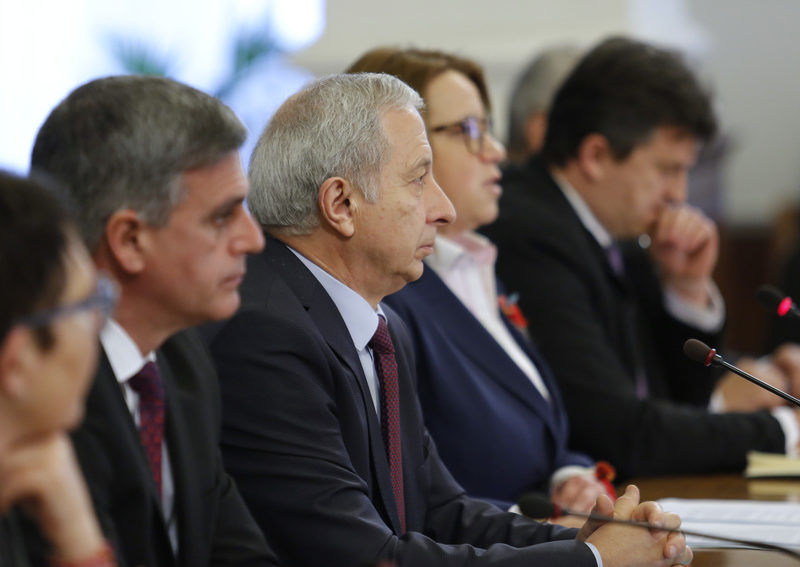 Bulgarian interim Prime Minister Ognyan Gerdzhikov said his cabinet may nominate a EU Commissioner following the 26 March elections, if its results would not allow the fast forming of a government.