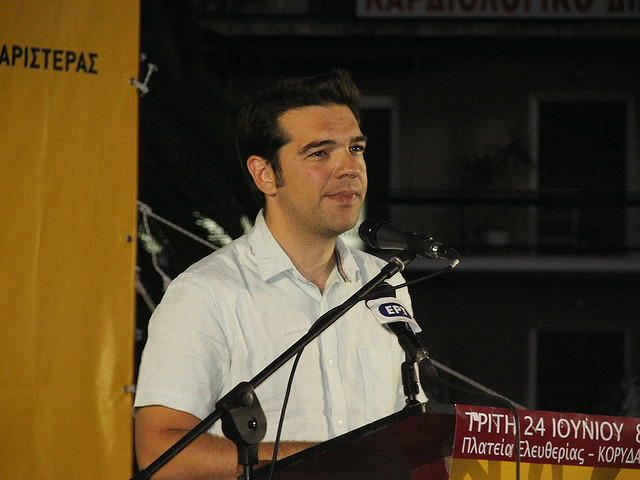 An MEP representing To Potami (River) – a centre-left party currently polling third for the forthcoming Greek elections – has claimed that in coalition, his party could tame the Eurosceptic leftist Syriza party and help keep Greece within the eurozone.

Miltiadis Kyrkos was elected to the parliament last year for To Potami, which an Alco poll for Greek weekly To Pontiki (21 January) indicated would poll 6% when Greece votes this Sunday (25 January).

Syriza, the party led by Alexis Tsipras, is set for a comfortable victory in Sunday’s general election, according to polls that show the radical leftists gaining ground as the election approaches.

The Alco poll indicated Syriza would get 33.8%. This is close to the 36-40% usually needed by a party to secure a parliamentary majority. About 9% of voters had yet to decide (see background).

To Potami could snatch third place

The poll showed the governing centre-right New Democracy party 4.9% behind Syriza, leaving To Potami in third place and on track to become a decisive power-broker if voters deliver a hung parliament as expected.

Syriza has denied that it is in discussions with To Potami, according to Kyrkos.

“They paint this picture because they want to form a single party government, but current polls suggest that is not possible,” the Greek MEP said in an interview.

A majority government for Syriza was not in the interest of Greece, he said, adding: “We believe the changes that Greece needs are so huge that we need a larger electoral base to enable these changes to take place.”

“Europe will continue to support Greece, but it is expected that Athens will stick to the promises made to its partners,” Juncker added.

Tsipras’ party wants to renegotiate the Greek public debt and reverse the austerity policies implemented under the financial aid programme.

Greece’s repayment plan for the 240 billion euros it has received since the start of the crisis is scheduled to run until 2022, so Brussels is nervous about Tsipras’s pledges to tear up the Greek financial programme.

Kyrkos said Potami would temper the extreme factions within Syriza if it goes into coalition with the party.

“We have one condition [for coalition with Syriza]: that the future of Greece lies in the EU and eurozone, so anything that will change that course, we will fight against it,” Kyrkos said.

“We know Greece has a huge debt to pay,” the centre-left MEP said, explaining that To Potami wanted to ensure discussions with the Troika of Greece’s international lenders were completed “in accordance with European laws and customs”.

He indicated that a Potami coalition partner would seek structural reforms stating that “Greece made a lot of sacrifices but the government did not follow the rules of the game, we did not do that many structural reforms that were needed.”

Kyrkos also warned against calls from the far-left and the far-right for Greece to leave the eurozone. Marine Le Pen wrote favourably of Syriza on her blog in December, saying that a “warm wind of democracy” was blowing through Greece, evoking the victory of the people and their representatives over the European oligarchy and big finance.

“Marine Le Pen is hoping that a Syriza government will fall out with the European institutions and drop out of the eurozone […] We can keep Greece in Europe, we can moderate the voices in Syriza who say we don’t care about the euro,” Kyrkos maintained.

A vote for New Democracy would be equivalent to voting for a slow and painful death, Kyrkos said, adding: “We have made a lot of sacrifices now is not the time to throw them all away.”

Gianni Pittella, the chairman of the European Parliament’s Socialists and Democrats (S&D), recently told EURACTIV that he hopes Greece will form a progressive government “with all the left parties”, including Syriza.

As EURACTIV Greece first reported, the flirtation had already started with Hannes Swoboda, who blamed its traditional Greek Socialist partner, Panhellenic Socialist Movement (PASOK), for having lost its appeal to the electorate and connection with society.

Under Greek electoral law, parties must secure 3% of the vote to enter the 300-seat parliament.

The biggest party automatically gets a 50-seat bonus, and the level required to win outright depends on the share of the vote taken by parties that fail to cross the threshold.