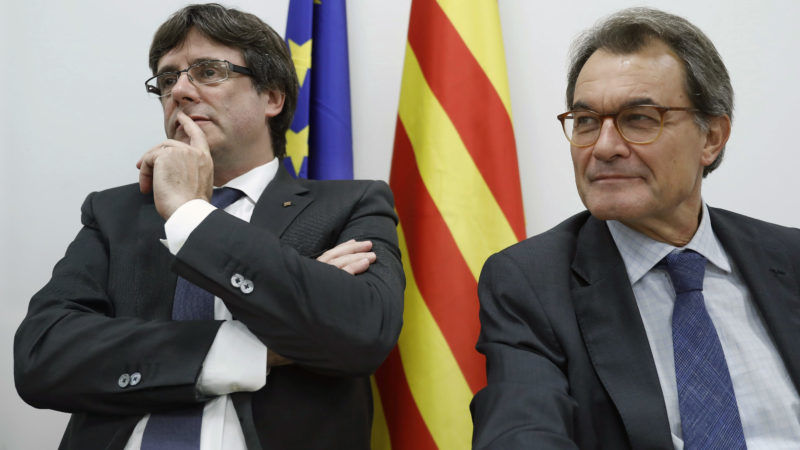 The secessionist leader of Catalonia called for international mediation on Monday (2 October) in the region’s dispute with Madrid, a day after hundreds of people were hurt as police swung truncheons and fired rubber bullets to disrupt an independence referendum.

Results showed voters had overwhelmingly backed independence in the referendum, which Spain has ruled illegal and which opponents of secession mostly boycotted. The European Commission also branded the referendum as “illegal”.

The vote was valid and must be implemented, said Catalan leader Carles Puigdemont.

“It is not a domestic matter,” he told a news conference on Monday. He said it was “obvious that we need mediation”, adding: “We don’t want a traumatic break … We want a new understanding with the Spanish state.”

Prime Minister Mariano Rajoy met leaders of other political parties and his conservative government issued a statement saying he was seeking a joint response to the crisis. He spoke to other European leaders and thanked them for supporting Spain’s constitutional order, the statement said.

Just spoke to @MarianoRajoy. Sharing his constitutional arguments, I appealed for finding ways to avoid further escalation and use of force.

Rajoy also started consultations with the leaders of the political forces represented in the Spanish parliament.

In Barcelona, hundreds of students gathered in a central square to protest at Sunday’s police crackdown, chanting pro-independence slogans and waving Catalan flags.

The government crackdown had “provoked an unacceptable totalitarian situation using state violence,” student Albert Lopez said. Another protest was held later outside the headquarters of the Spanish National Police in Barcelona.

Elsewhere, life in the city returned to near normal, but the violence had clearly left people in shock and may have hardened attitudes among those who favour independence.

“There is no possibility of dialogue now with the government. We are clear on that,” said a 51-year-old retired worker who declined to give his name.

Spain’s wealthiest region, wedged in the northeast on the Mediterranean coast below the mountainous border with France, has its own language and culture, and a growing minority there have nurtured hopes of independence for years. Madrid says the constitution prohibits secession and is non-negotiable.

The crisis could deepen further if the Catalan regional parliament uses the vote as justification for a unilateral declaration of independence, as foreseen in the referendum law enacted by the region but rejected by Madrid.

Polls before Sunday’s vote put support for secession at only around 40%, but most opponents were expected to boycott the vote. The Spanish government has taken the risk that its violent crackdown could increase support for the secessionists.

Puigdemont, who held the vote in defiance of a court order, urged Rajoy to say whether he was in favour of mediation, which he said should be overseen by the European Union. He said Brussels had been timid and lacked courage on the matter.

An EU spokesman declined to say whether the Union would mediate, although it would be unusual for Brussels to take such a step within one of the bloc’s own member states.

Other European leaders have mostly shied away from commenting on what they consider an internal matter, although some have expressed alarm at the violence.

Rivera called on Rajoy to suspend Catalan autonomy and hold elections in the region to change the nationalist-led government there, something Madrid has not ruled out.

Sanchez urged the prime minister, who takes a hard line against Catalan separatism, to start a dialogue with Puigdemont. He disapproved of the police charges which left many injured on Sunday, a Socialist Party statement said.

Spain’s two biggest trade union federations, the General Union of Workers (UGT) and Workers’ Committees (Comisiones Obreras), distanced themselves from calls by pro-independence groups and trade unions in Catalonia on Sunday for a general strike in the region on Tuesday.

Elsewhere in Spain, Catalonia’s bid for independence is fiercely opposed and led to pro-unity demonstrations in many cities from Zaragoza to Madrid over the weekend.

“I don’t agree with the police charging at people but, on the other hand, when you do something illegal you have to take responsibility for the risks,” said Madrid resident Gemma Lopez.

Ratings agency Fitch said the confrontational nature of the vote in Catalonia increased Spain’s near-term political risks and would make a negotiated solution more complicated, but said it views Catalonia’s secession from Spain as very unlikely.

Catalonia is a center of industry and tourism accounting for a fifth of Spain’s economy, a production base for major multi-nationals from Volkswagen to Nestle, and home to Europe’s fastest-growing sea port. Although it already has extensive autonomy, its tax revenues are crucial to Spain’s state budget.

The events in Catalonia have forced Rajoy to delay talks over next year’s budget after a key political group withdrew support for his minority government until the issue is resolved.

But other parties’ sharing his opposition to Catalonia’s secession suggests that his position is not in danger.

The ballot, which asked voters if they wanted an independent republic, has no legal status as it was banned by Spain’s Constitutional Court for being at odds with the 1978 constitution, which states Spain cannot be broken up.