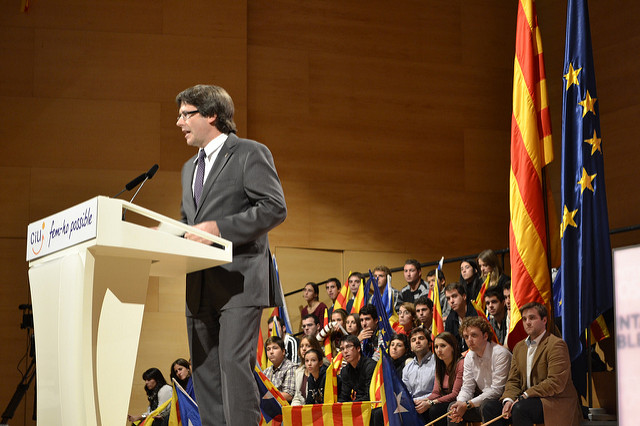 Carles Puigdemont concluded a visit to Belgium and insisted that a meeting with the Commission president had not been the objective of the trip. [Convergència Democràtica de Catalunya/Flickr]

President of the Generalitat of Catalonia Carles Puigdemont has insisted that the objective of his first official overseas visit was not “to speak to representatives of the Commission”. EURACTIV Spain reports.

However, the executive insisted that Puigdemont had requested a meeting with its president, Jean-Claude Juncker, but was unable to organise it because of a full schedule.

“I can confirm that contact was made at cabinet level and that we replied that President Juncker’s agenda could not accomodate him today,” said European Commission spokesperson Mina Andreeva at the daily press briefing.

“As you can see from the calendar (of the Commission for the coming week) there are no meetings planned with the Catalan president,” Andreeva added.

Catalonia’s parliament swore in a new separatist leader yesterday evening (10 January), putting the pro-independence movement’s commitment to break with Spain over the next 18 months back on track after a long political deadlock.

The pro-independence president, who was elected in January, did not indicate whether he would push for more progress before or after the Spanish general election in 2016.

“We’ll see. We have a clear mandate from the Catalan parliament and I have made a very clear and precise commitment in my governmental programme,” Puigdemont said, adding that a formal meeting invitation with the EU would be a future step along the way.

He insisted that such a meeting was not the objective of his Brussels visit.

Puigdemont also added that it would remain to be seen what kind of EU would emerge following the United Kingdom’s referendum on EU membership and how European politics would “adapt to changes in political realism”.

Many of the most radical Catalan separatists believe the autonomous elections on 27 September 27 this year will open the door to the question of secession from Spain. Researcher Ignacio Molina believes this is a dangerous idea.

He also added that it would be a question of playing the waiting game and evaluating the situation in Spain and “seeing how other governments within and outside the EU react to the political and economic situation in Europe and, in particular, in Spain”.