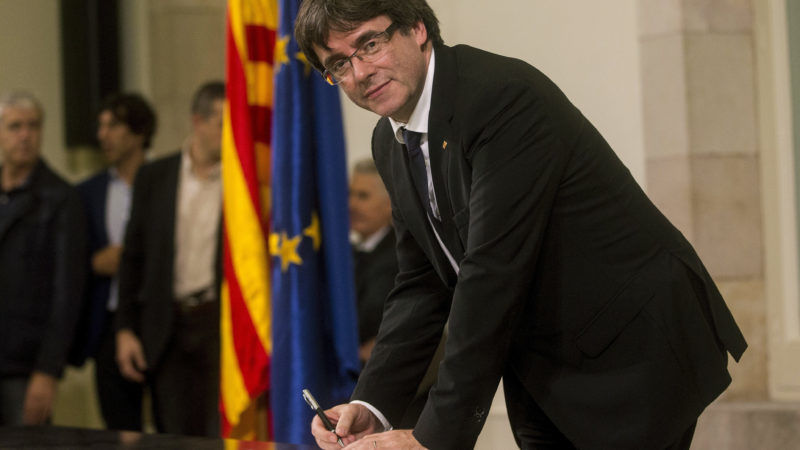 Catalonian President Carles Puigdemont signs the document which proclaim the Catalonian Republic as an independent state, after his appearance at the Parliament of Catalonia in Barcelona, Spain, 10 October 2017. [Quique Garcia/EPA/EFE]

As Spain headed into the unknown, Prime Minister Mariano Rajoy was to chair an emergency cabinet meeting early on Wednesday to discuss the central government’s response.

In a speech to regional lawmakers in Barcelona that drew both praise and criticism from separatists, Catalan president Carles Puigdemont said he had accepted “the mandate of the people for Catalonia to become an independent republic” following a banned referendum on 1 October.

But the 54-year-old asked the Catalan parliament to “suspend the effects of the independence declaration to initiate dialogue in the coming weeks”.

Rajoy has vowed to use everything in his power to prevent independence and has refused to rule out imposing direct rule over the semi-autonomous region – an unprecedented move many fear could lead to unrest.

He has called the cabinet meeting for 9:00 AM Wednesday.

Political leaders in Catalonia, Spain and Europe have come out against secession, concerned over the country’s biggest upheaval since its transition to democracy in the 1970s.

Puigdemont and his allies signed an independence declaration outside the parliament chamber, but he then suspended it and again called for dialogue, a regional government spokesman told AFP.

Deputy prime minister Soraya Sáenz de Santamaria told reporters shortly after the signing that Puigdemont was “a person who doesn’t know where he is, where he’s going or with whom he wants to go”.

Spanish government says any dialogue with Catalonia must be within the law https://t.co/uldCJPvsXP pic.twitter.com/fooez8vkR5

EU nations are watching developments closely amid concern that any Catalan move to break away from Madrid could put further pressure on the bloc still dealing with the fallout from Britain’s shock decision to leave.

Reaction was mixed among those who had hoped to witness a historic moment for a region that remains deeply divided over independence.

Merce Hernandez, a 35-year-old architect, said: “I am very emotional, this is a historic day. I’m satisfied.”

But in Barcelona’s trendy Gracia neighbourhood, resident Maria Rosa Bertran said she was against a delayed secession.

“I find it even worse because it is suffering a longer agony, indecision and uncertainty is the worst thing that can happen to us,” she told AFP.

Police deployed en masse around the regional parliament ahead of Puigdemont’s address, blocking public access to a park that houses the building as crowds watched the session on giant screens, waving Catalan flags and some brandishing signs reading “democracy.”

At stake is the future of a region of 7.5 million people deeply divided over independence, one of Spain’s economic powerhouses whose drive to break away has raised concern for stability in the European Union.

But the Catalan president says the result of the independence referendum that was held in defiance of a Spanish court ban justified splitting from Madrid.

Around 90% of the 45% who cast ballots voted for independence but the poll was poorly monitored and many Catalans opposed to secession boycotted what Madrid branded an illegal plebiscite.

Spain had sought to prevent the referendum from taking place by seizing ballot boxes and arresting a number of organisers, and police used rubber bullets and batons against voters on the day, triggering concern at home and abroad.

Anger on both sides

On Monday, Ada Colau, the popular mayor of Barcelona, warned that a unilateral declaration of independence would put “social cohesion” at risk.

We must be responsible and de-escalate tensions to protect social cohesion. Declaration on the current situation in Catalonia: pic.twitter.com/XGdnkaAL7U

Pro-unity and pro-independence supporters have staged mass rallies in Barcelona over the past week, highlighting divisions in Catalonia.

“We believed that today was the day to solemnly declare a Catalan republic, and we probably missed an opportunity,” said party lawmaker Anna Gabriel.

The crisis has also caused deep uncertainty for businesses in one of the wealthiest regions in the eurozone’s fourth largest economy.

Spain’s stock market shed nearly 1.0% ahead of Tuesday’s parliamentary session and a string of companies have already moved their legal headquarters – but not their employees – from Catalonia to other parts of the country.

“The companies have left, the banks are gone, we are all going to see what will happen,” said Barcelona resident Bertran.

Publishing house Planeta was the latest to announce a move to Madrid after Puigdemont’s speech.

Demands for independence in Catalonia, which has its own language and cultural traditions, date back centuries.

My speech @EU_CoR with my direct appeal to President Puigdemont. #SOTREG

It seems politicians in #Catalonia have chosen the path of de-escalation for now. Something we applaud. Common sense must prevail! pic.twitter.com/mPzKVEAxgU

The Declaration of Independence is being signed by majority of the representatives of Catalonia. This the inception of the Catalan Republic pic.twitter.com/IifqJULzIK

.@miqueliceta declaration: We call the governments of Catalonia and Spain to stop an escalation that brings us all to the disaster #1Oct pic.twitter.com/bgNk0qHjuu