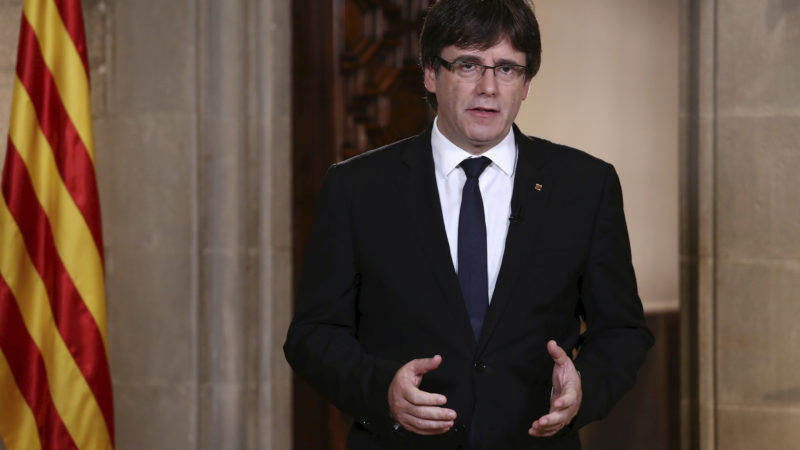 Catalan leaders are preparing to declare independence from Spain after a violence-hit referendum, defying a warning from the country’s king that national stability was in peril.

As the European Union urged dialogue to ease the standoff between separatists in the northeastern region and Madrid, a regional government source said the independence declaration could be as early as Monday (9 October).

Spain's King Felipe attacks Catalan referendum organisers for having put themselves "outside the law", in TV address https://t.co/Iv8qlSDuU0 pic.twitter.com/8UAQDcyRlR

Catalonia’s president Carles Puigdemont called the central government’s policies “disastrous” as the region’s leaders pushed on with its bid to break away from Spain, angering Madrid and raising the risk of further unrest.

Madrid reaction to Puigdemont statement: "The government will not negotiate over anything illegal and will not accept blackmail"

Spain’s key IBEX 35 stock index plunged by more than three percent Wednesday in the ongoing turbulence, with some big Catalan banks down more than five percent.

“Political risk is back on the agenda in Europe,” NFS Macro analyst Nick Stamenkovic told AFP.

After meetings in the regional parliament yesterday (4 October), pro-independence lawmakers called a full session next Monday to debate the final results of the vote.

“According to how the session goes, independence could be declared,” a regional government source told AFP, speaking on condition of anonymity.

Mireia Boya of the radical leftwing separatist CUP said it would be “a plenary to proclaim the republic” of independent Catalonia.

Catalan leaders “with their irresponsible conduct could put at risk the economic and social stability of Catalonia and all of Spain”, he said.

Accusing them of “disloyalty”, the king said that the state had to “ensure constitutional order”.

Puigdemont angrily rejected this, saying in a televised address: “The king has adopted the (national) government’s position and policies which have been disastrous with regard to Catalonia. He is deliberately ignoring millions of Catalans.”

He accused the national government of failing to respond to proposals for mediation in the crisis.

A declaration of independence would intensify the conflict with the central government, which along with the national courts has branded the referendum illegal.

Madrid has the power to suspend the semi-autonomous status that Catalonia currently enjoys under Spain’s system of regional governments.

That would further enrage Catalan protesters, who say they are being repressed by Spain.

The king’s intervention could clear the way for Prime Minister Mariano Rajoy to act.

Hundreds of thousands of Catalans rallied in fury on Tuesday during a general strike over the police violence during the referendum.

Scores of people were injured on Sunday as police moved in en masse, beating voters and protesters as they lay on the ground and dragging some by the hair.

If the Spanish overreaction continues, other countries will start expressing concern for the situation in Catalonia https://t.co/W94TID0Duz

European Commission Vice President Frans Timmermans said Wednesday it was “time to talk, finding a way out of the impasse, working within the constitutional order of Spain”.

Speaking in an emergency debate in the European Parliament, he defended Madrid’s right to “the proportionate use of force” to keep the peace.

‘Fuel to the fire’

In his speech, Felipe repeated earlier calls for harmony between Spaniards.

Adding to tensions, the courts on Wednesday placed Catalonia’s regional police chief Josep Lluis Trapero and three other suspects under investigation for an alleged “crime of sedition”.

The force has been accused of failing to rein in pro-independence protesters during disturbances in Barcelona last month.

A rich industrial region of 7.5 million people with their own language and cultural traditions, Catalonia accounts for a fifth of Spain’s economy.

Catalan claims for independence date back centuries but have surged during recent years of economic crisis.

The regional government said 42% of the electorate voted on Sunday, with 90% of those backing independence. But polls indicate Catalans are split.

The vote was held without regular electoral lists or observers.

A grouping of Catalans opposed to independence called for supporters to join a counter-demonstration in Barcelona on Sunday.

3 responses to “Catalan leaders to declare independence in Spain crisis”