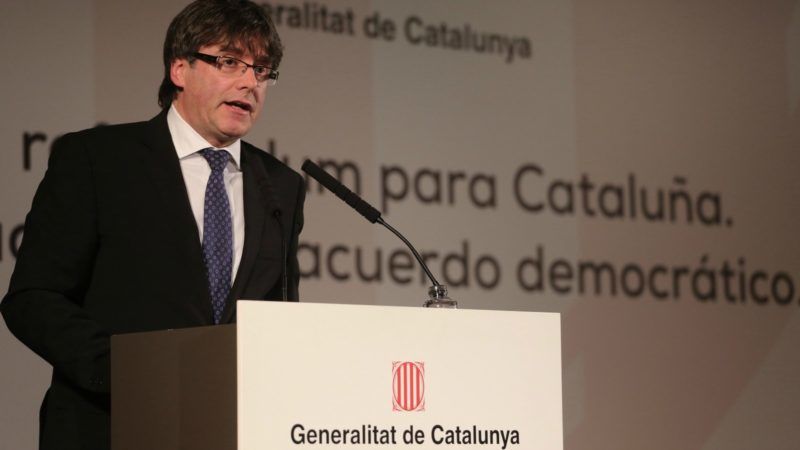 Puigdemont, who is a former journalist, held yesterday (22 March) a conference in the Spanish capital entitled ‘A referendum for Catalonia. Invitation to a democratic agreement’. According to a press release, the aim was offering another chance to negotiate the terms of a referendum with the state authorities.

The president of the regional government, joined by his vice-president Oriol Junqueras and the regional minister of foreign affairs Raül Romeva, addressed representatives of the Spanish congress, senators and members of the press, among other guests, at the symbolic Palacio de Cibeles in Madrid.

Puigdemont said that the option of an agreed referendum was the “most plausible for everyone” and, for this reason, his government was ready to “talk about everything and with everyone”, including about the date and the question of the referendum on independence.

Puigdemont: “We will hold the referendum” https://t.co/BR4gAm09n1

“We will wait until the last minute. But let there be no doubt, if there is no agreed proposal, we will hold the referendum”, Puigdemont stated.

Puigdemont has said that an independent Catalonia would be recognised by the EU, because, in his view, it would be in the interest of the European bloc.

Romeva insisted that the Catalan government’s proposal for “democratic empowerment” should be seen through a “European prism”.

“Throughout history, new states have appeared, joint initiatives have been born and all this has been incorporated, with a pragmatic spirit, into the idea of Europe […] I am sure all democrats will agree that the new future of Europe must define itself on the basis of freedom and not on imposition”, Romeva said.

With regard to Catalan-Spanish relations, Junqueras assured that Catalonia wanted “the best for those with whom it shares cultural, political, and linguistic ties” and assured that “the majority of Catalans want to decide the question of their future relationship by voting”. In this respect, the Government’s objective was “to have the best possible relationship with all of those around us –as equals”, Junqueras noted.

The Catalonia ruling coalition has reportedly already drafted a transitional bill on the basic structure and functioning of a hypothetical Catalan state.

Spanish Prime Minister Mariano Rajoy said on 21 May that the “threat’s and “blackmail” from the Catalan regional government were “inadmissible”. “It will never come into effect, and national sovereignty will continue”, he said.

One response to “Catalonia leader ups the ante in independence drive”