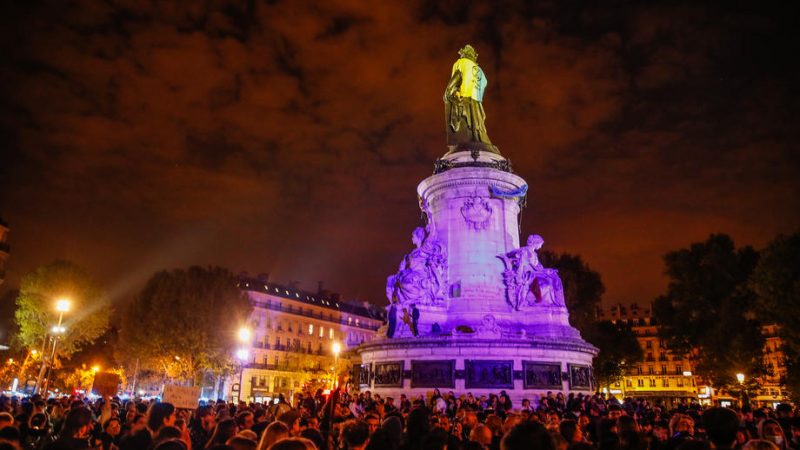 Clashes have occurred along a demonstration held in Place de la République in Paris on Sunday 24 April, after Emmanuel Macron announced his victory for a second mandate. [EPA-EFE/Mohammed Badra]

With the ongoing French EU Council presidency and the upcoming parliamentary elections, Emmanuel Macron will enjoy no grace period at the start of his second mandate and the opposition, both on the left and the right, is more determined than ever to strip the newly re-elected president of his parliamentary majority.

With the ink on ballot sheets from the presidential elections barely dry, parties are gearing up for the legislative vote in June. These are set to alter further the balance of power between the Socialists and the Republicains who have already imploded and are struggling to survive.

What are the possible scenarios?

An “unlikely” far-right or far-left majority

According to Thanassis Diamantopoulos, professor of political science at the University of Athens and expert on the French regime, the hypothesis of a far-right or far-left majority in the National Assembly is “unlikely”, despite the historically high scores of Le Pen and Mélenchon’s parties.

In France, the two-round majoritarian single-member electoral system means that “even with a majority, the far right and far left cannot win parliamentary elections. […] They have no potential to form an alliance”, and it is easier for “the forces around the centre to form an alliance”, Diamantopoulos told EURACTIV France.

But in recent days, Mélenchon has unequivocally called on his supporters: “I ask you to elect me Prime minister”.

Between the fact that “there will be no defections” in favour of Mélenchon’s party and the “under-representation of the extremes”, the possibility that his appeal will become a reality in the ballot box remains dim.

Another element that works against the most radical parties is that “there are two ‘anti-system’ expressions, one on the far right and the other on the left”.

For these reasons, eight deputies were elected under the banner of the Rassemblement National in 2017, despite qualifying for the second round of the presidential election, and Mélenchon’s party had seventeen. These results are far below the overall results at the national level.

The (new) attempt to unite the left

On the left, the urgent need for unity is being felt both by executives and voters, in order to regain influence and hope to impose a social and ecological majority on Macron.

Contacted by EURACTIV France, Sylvie Guillaume, a Socialist MEP, said she hoped that “the legislative elections [will make it possible to] restore a better balance because the presidential election is not a blank check” for the newly re-elected president.

The same is true of the Insoumis — Mélenchon’s supporters — who want to believe in uniting the left.

MEP Leïla Chaibi told EURACTIV France that her movement “appeals to those who do not feel represented” and admits to being in discussion with the other left-wing forces, to agree on “a common base”.

The call of Mélenchon and his supporters seem to have been heard by the other left-wing movements. Europe Ecologie Les Verts MEP David Cormand told EURACTIV France that “the political forces of the left and the ecologists must organise themselves to weigh together if they do not want to condemn themselves to lose separately”.

Léon Deffontaines, president of the young communists’ movement, told EURACTIV France he hoped to see “the ideas of equality, sharing and solidarity become the majority again”.

Communist candidate Fabien Roussel pleaded on Sunday evening for a “global agreement” of the left, demanding that “local anchors and different sensibilities on the left be taken into account” in order to avoid the distribution benefiting only La France Insoumise, which largely dominated the left in the first round of the presidential election.

Yet, according to Diamantopoulos, even if “some constituencies [the left] could get some MPs elected” the idea of “getting close to a parliamentary majority is a political fiction”.

What majority for Macron?

Despite the parliamentary challenges, Macron will not throw in the towel.

Judging by the comments of Gabriel Attal, spokesman for the outgoing government,  confidence in Macron’s camp remains high.

“I am convinced that the French will give the president of the republic the means to act to protect them, with a majority [in the National Assembly],” Attal told BFMTV-RMC on Monday morning.

Having limited manoeuvring room due to a lack of partisan alliances beyond the existing majority, Macron’s camp will try to convince voters of other political inclinations or, at best, conclude circumstantial agreements in the territories where this is possible.

Diamantopoulos believes Macron could build a “presidential majority that would start with the former Gaullists (centre-right Républicains) and reach the hinge of the left, including perhaps even a part of the Socialist Party and, of course, the ecologists”.

Macron must therefore, according to Diamantopoulos, “wink at the ecologists” the day after the election. His promise to appoint a prime minister “in charge of ecological planning” would be a step in this direction.

But the question is: when will this appointment take place? Diamantopoulos warned that this plan could be changed, depending on the results of the legislative elections, which will tilt the future government more to the right or the left, and thus define Macron’s alliance choices.

As a reminder, in 2017 he chose Edouard Philippe from the centre-right as prime minister, even though he was not forced to do so, having acquired a solid majority in the Assembly, as well as several other ministers from the right.

At the same time, Macron will also have to devote some of his energy to the French EU presidency.

“He needs to ensure the ongoing French EU presidency is a success. It ends on June 30 and there is an upcoming conference on the Western Balkans to be organised soon, which provides an opportunity to start rethinking the EU’s enlargement policy,” Tara Varma of the European Council on Foreign Relations told EURACTIV in emailed comments.

“Macron will have to take the mantle of European diplomatic leadership again. He mentioned Ukraine in his victory speech. He should travel to Kyiv immediately with (German) Chancellor Olaf Scholz to demonstrate Europe’s support for Ukraine,” she said. 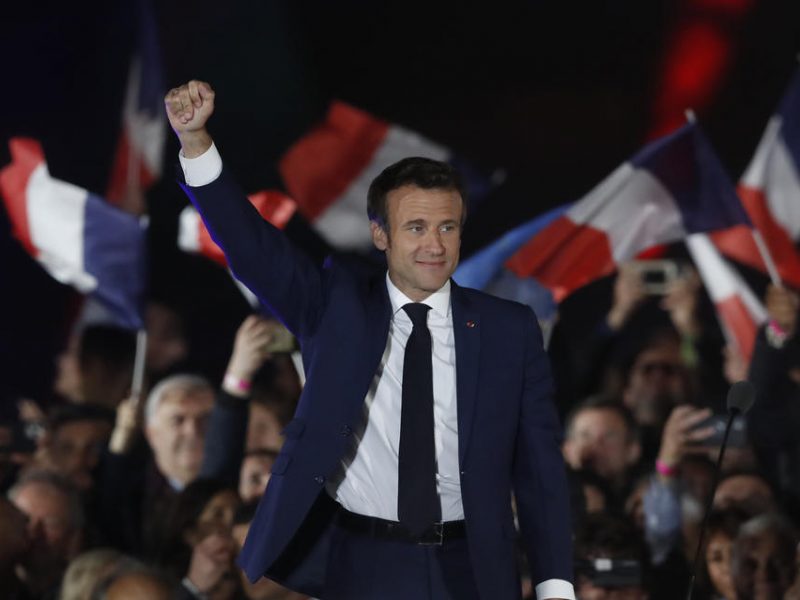 Big relief after Macron's re-election but 'third round' ahead

French President Emmanuel Macron pledged to unite a deeply divided nation after winning re-election on Sunday (24 April) in a battle against rival Marine Le Pen that saw the far right come its closest yet to taking power.