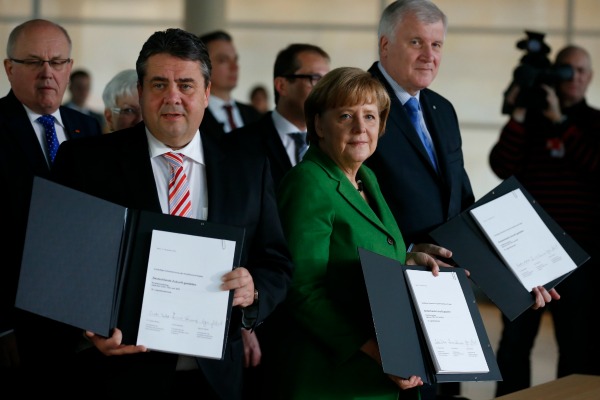 The coalition agreement, announced earlier today (27 November), shows high awareness of European expectation for the new German government. Yet, the EU chapter of the deal reads like a compulsory exercise buried under domestic policy, euractiv.de reports.

Europe does not feature as a high priority in the text of the new coalition agreement, unveiled earlier today by German Chancellor Angela Merkel's conservatives and the centre-left Social Democrats (SPD).

Still, the message emanating from the 185-page document is clear: Chancellor Angela Merkel's European policy will continue broadly unchanged, without any notable modifications.

The elected CDU/CSU-SPD coalition is evidently aware of Berlin's responsibilities in light of the economic, social and institutional challenges facing the European Union and the eurozone. As the bloc’s largest economy and anchor of stability, Germany knows it has an enormous responsibility to live up to and that European partners have high expectations from the new German government.

The new government coalition deal says it is ready to meet these expectations. But it also insists on the role of member states, who are reminded of their own responsibility in overcoming the crisis.

EU institutions must also play their role, the document notes. As European policies intervene more and more in the lives of citizens, EU decisions must be better explained, otherwise trust will be lost. In other words, coalition partners believe the EU’s democratic legitimacy must be strengthened.

But established red lines remain firmly drawn up, with Germany firmly refusing to mutualise government debt like European socialists had initially hoped. In other terms, every EU country remains liable for its own budget and deficits despite the strengthened economic coordination agreed during the eurozone debt crisis.

In a sideswipe at the US, the coalition agreement insists on a new international legal framework on the handling of personal data. Here, the document refers to the US spying scandal, saying trust must be restored. "We expect a clear commitment on this and corresponding measures from the US administration." The rules for dealings between partners must be more clearly defined with a view to creating verifiable agreements to protect citizen’s privacy.

The coalition deal is succinct on Germany's special relation with France, merely stressing that "the Franco-German partnership is unique in its breadth and depth", despite the current economic and political weakness in Paris.

The passage regarding Turkey appears as a compromise between the CDU/CSU and the SPD, stating that the country’s EU accession process must remain open-ended. As long as the EU is not capable of accepting Turkey or if the country cannot fulfill all of its obligations, its "special relationship" with the EU and Germany will continue.

On foreign policy, the coalition deal calls for reinforcing the office of Catherine Ashton as well as the European External Action Service (EEAS). In a clear demand toward Brussels, the agreement states that "Foreign policy questions, trade policy and development cooperation must be better linked and more tightly coordinated."