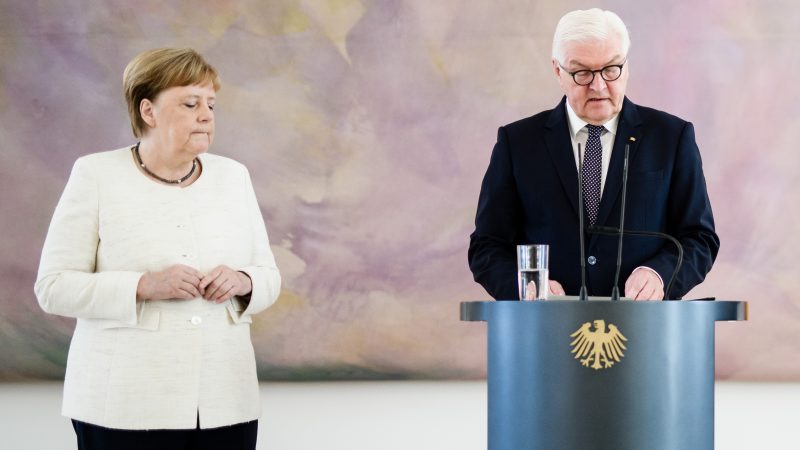 German Chancellor Angela Merkel (L) closes her eyes next to German President Frank-Walter Steinmeier while attending the handing over of the certificates of appointment and discharge for the Ministers of Justice at Bellevue Palace in Berlin, Germany, 27 June 2019. [Clemens Bilan/EPA/EFE]

German Chancellor Angela Merkel’s office sought to calm nerves after she suffered a second bout of uncontrolled trembling in just over a week, saying the veteran leader was en route to Osaka on Thursday (27 June) as planned for the G20 summit.

Merkel’s latest health scare came just hours before she was due to board the plane for Japan, sparking new questions about her health.

The German leader, who turns 65 next month, began to tremble as she stood next to President Frank-Walter Steinmeier, who was addressing a ceremony to formally appoint a new justice minister.

The shaking went on for about two minutes, according to a DPA photographer who was present.

Angela Merkel seen trembling again during a ceremony in Berlin, eight days after a similar incident

Merkel folded her arms in a bid to stop the trembling, which finally subsided after she took a few steps.

The chancellor was offered a glass of water, but turned it down.

A previous bout of shaking last Tuesday was blamed on dehydration on a hot summer’s day. 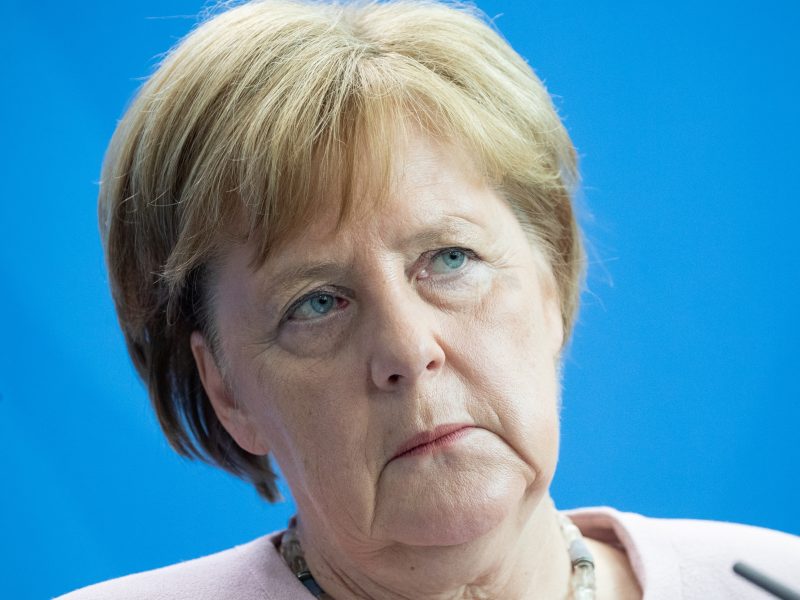 German Chancellor Angela Merkel dismissed concerns about her health after visibly trembling at an official ceremony Tuesday (18 June), saying she was just a bit dehydrated in the heat.

Then the chancellor had appeared unsteady and shook as she stood in the midday sun next to visiting Ukrainian president Volodymyr Zelensky, whom she was welcoming to her office building with military honours.

On Thursday, a German government spokesman said Merkel would not cancel any appointments in the next two days.

“The chancellor is well,” he told AFP.

Merkel’s spokesman Steffen Seibert later tweeted she was on the way to Osaka for the G20 summit, and that “numerous bilateral talks with other leaders are planned”.

Merkel, frequently called the European Union’s most influential leader and the most powerful woman in the world, has always enjoyed relatively robust health.

She has said she will leave politics at the end of her term, in 2021.

There were brief concerns about her wellbeing in 2014 when she was taken ill during a television interview. The broadcast was interrupted when she experienced a drop in blood pressure.

Seibert explained at the time the leader did not feel well for a moment, then ate and drank something and continued the interview.

Earlier that same year, she had fractured her pelvis while cross-country skiing in Switzerland and was ordered to cut back her schedule dramatically and stay in bed as much as possible for three weeks.

A keen hiker too, Merkel herself once revealed that that she has a “camel-like” ability to store energy for sleepless all-night summits.

That capacity would be called on in the next three days, when she will have a gruelling schedule to follow — with the two-day G20 summit followed immediately by a meeting of EU leaders in Brussels from Sunday to decide on the top jobs in the bloc.

German media, which had offered various theories for her previous shaking episode, were silent this time, noting only that the chancellor is always accompanied on major international trips by a doctor.

In case of emergency, she would be replaced by Vice Chancellor Olaf Scholz, who would carry out her functions until parliament elected a new leader.

Meanwhile, to head off a repeat of an aircraft failure that forced Merkel to arrive late to the previous G20 summit in Buenos Aires, German media reported that a second A340 is flying to Osaka on standby.

The second plane was due for a training flight to Tokyo.