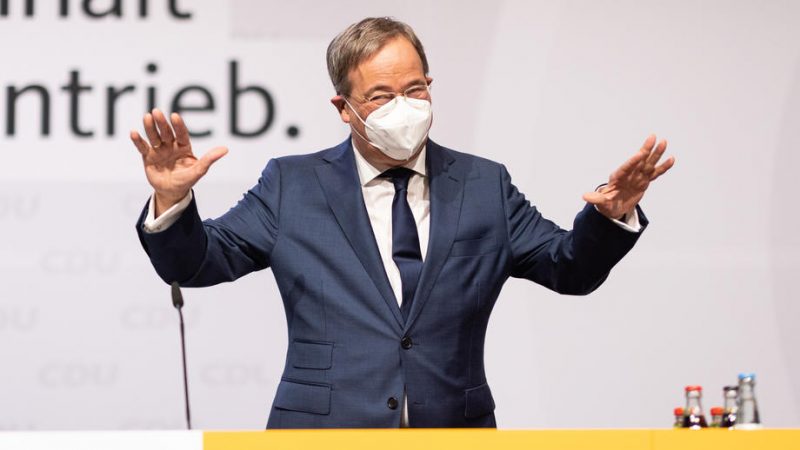 Chancellor Angela Merkel’s conservatives won a resounding victory in a state election in Eastern Germany on Sunday (6 June), in a boost to Armin Laschet, who hopes to succeed her in September’s national election.

An exit poll from the Saxony-Anhalt election for public broadcaster MDR had the Christian Democrats (CDU) on 36%, up more than 6 points on five years ago, and far ahead of the far-right Alternative for Germany (AfD), who were on 22.5%, slightly down on the previous election.

Laschet, a centrist, was seen as having made an uncertain start to his election campaign and had faced calls to chart a more right-wing course to win back voters disenchanted by 16 years of compromises under Merkel.

“We have won the election,” Saxony-Anhalt state premier Reiner Haseloff said after the exit polls came out. “A great majority of our citizens have said we don’t want to be associated with the AfD. And for that I’m grateful.”

He and other conservatives hailed the result as a tailwind for them ahead of the federal election.

“This will give us a boost for Berlin,” national conservative caucus leader Ralph Brinkhaus said. “It is a victory for Armin Laschet.”

The results were disappointing for most other parties, with the Greens, who are running a close second to the conservatives nationally, only in the single digits in the regional election.

“Sure, we’d like to have done better,” said their candidate for chancellor, Annalena Baerbock. The Greens are traditionally weaker in less urban Eastern Germany, which is more reliant on the carbon-intensive industries that the Greens hope to phase out.

Conservative Friedrich Merz, who lost out to Laschet in their race for the CDU leadership, countered in a tweet: “This evening, the Baerbock train came off the rails.”

Carsten Nickel, an analyst at consultancy Teneo, said the state election result was a “much-needed boost for Laschet just as the Bundestag campaign is about to heat up”.

The pro-business Free Democrats were another winner, re-entering parliament after their vote share climbed back above the 5% threshold needed to win seats.

The Social Democrats, junior partners in Merkel’s ruling coalition, had a disappointing night, with their forecast vote share of 8% showing they were unable to capitalise on the popularity of Olaf Scholz, who is finance minister and their candidate for chancellor.

Haseloff conceded that forming a state government could be tricky. His ally, state legislator Siegfried Borgwardt, said the party would not join forces with the AfD or the far-left Linke, but he would not commit to any other scenarios at this stage.

Merkel, in power since 2005, is stepping down after the federal election, leaving the political succession wider open than at any time in decades.