Miroslav Marcek (C) arrives at the opening of the main trial concerning the murder of journalist Jan Kuciak and his fiance Martina Kusnirova in the Judicial Academy building in Pezinok, Slovakia, 13 January 2020. [Jakub Gavlak/EPA/EFE]

A former soldier admitted in court on Monday (13 January) killing a Slovak journalist whose murder two years ago led to anti-corruption protests that brought down the government of long-time prime minister Robert Fico.

Miroslav Marček told a court he was hired to kill 27-year-old Ján Kuciak, who he shot along with Kuciak’s fiancée Martina Kusnirova at their house outside Slovakia’s capital Bratislava in February 2018.

Five people, including a prominent businessman who the investigation into the murder showed had links with security officials as well as judicial and political figures, have been charged in relation to the couple’s deaths.

The case is seen as a test of Slovakia’s judicial and political system ahead of an election in February.

Four suspects were in court on Monday in Pezinok, north of Bratislava, including Marček’s cousin Tomas Szabo, who Marček said had approached him with an offer from another of the defendants to undertake the contract killing.

A Reuters reporter said they were led into the courtroom by guards wearing balaclavas and carrying automatic rifles.

Marček, 37, told the court how an initial plan to kidnap Kuciak and then kill him was abandoned because it was too complicated.

Describing the killings, he said he hid outside the house before the victims came home on 21 February then waited for an opportunity to strike.

“That came when Ms Kusnirova went to the toilet. I hit him (Kuciak) in the chest,” news website www.sme.sk quoted Marček as saying.

He said he had killed Kusnirova so that she could not identify him. “He (Kuciak) was falling backwards, he held on to the door with one hand, and she came. It was not possible to just leave,” Marček said.

He told the court he was sorry for his actions and that he had decided to confess after seeing the victims’ families on television.

A fifth suspect, Zoltan Andrusko, admitted to facilitating the murder and was sentenced to 15 years in prison last month.

Also in court on Monday was businessman Marián Kočner, who is accused of ordering the hit. He denied that charge, but admitted a lesser offence related to illegal ammunition found by police at his house.

A third defendant, Alena Zsuzsova, denied charges of being an intermediary in the killings.

Szabo, a former police officer, pleaded not guilty to murder. Slovak media reported that Szabo said he had been approached by Andrusko about beating up Kuciak, but not killing him.

He had reported on Kočner’s business activities, including the takeover of a television station and property deals. 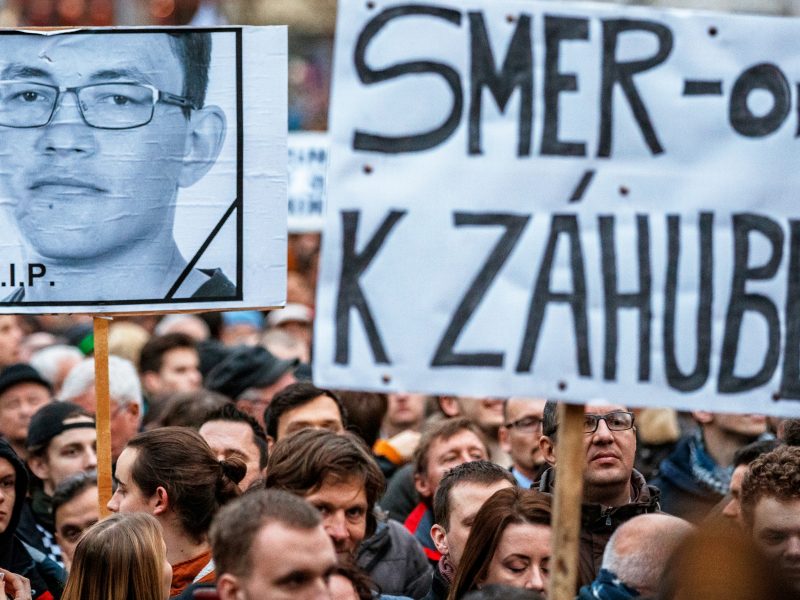 Fico, his cabinet, and later the national police chief all resigned after the murders sparked Slovakia’s biggest protests since the fall of communism, with crowds calling for an independent investigation and an end to widespread corruption.

Fico continues to lead his Smer party ahead of the February parliamentary election.