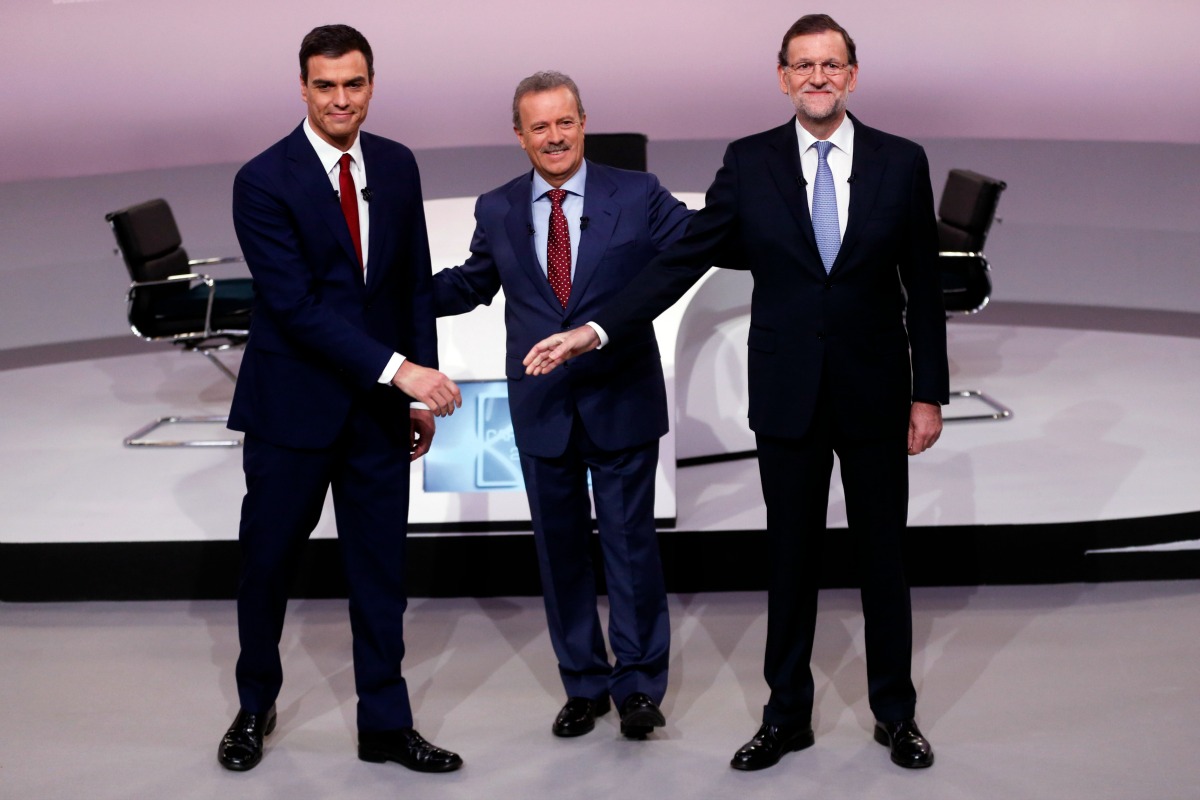 A debate before Sunday’s Spanish general election (20 December) exploded into an angry row yesterday (14 December), when the opposition leader accused Prime Minister Mariano Rajoy of not being a “decent” man.

The humdrum election campaign burst into drama when Socialist leader Pedro Sanchez attacked Rajoy over alleged high-level corruption and accused him of lying over his government’s economic record. A red-faced Rajoy angrily rejected his charges.

“If you continue to be prime minister, the cost for our democracy … will be enormous, because the prime minister, Mr. Rajoy, has to be a decent person and you are not,” Sanchez said in a televised debate watched by millions.

“You are young. You are going to lose these elections,” Rajoy, 60, told his 43-year-old rival. “You can recover from an election loss, but you can’t recover from the contemptible, mean and despicable statement you have made here today.”

“I am an honourable politician, at least as honourable as you,” Rajoy said.

The debate was a late chance for both men to bolster their support in the face of an unprecedented challenge from new parties to Rajoy’s centre-right People’s Party (PP) and Sanchez’s Socialists, which have together dominated Spanish politics since the end of the Franco dictatorship in the 1970s.

Spain’s economy is picking up after a severe economic and banking crisis but unemployment remains over 20% and Spaniards are angry over high-profile cases of corruption, some linked to the PP.

Polls show Rajoy’s party ahead but short of a parliamentary majority, while new parties, the anti-austerity Podemos (“We can”) and the centrist Ciudadanos (“Citizens”) challenge the Socialists for second place.

Many voters remain undecided, but the most likely outcome appears a coalition or minority government.

“Debate in black and white”

The debate got acrimonious when Sanchez touched on a corruption case that erupted in 2013 when the PP’s former treasurer told a judge he collected millions in cash donations from construction magnates and distributed them to senior PP figures, including Rajoy. Rajoy has denied that he or the PP had accepted illegal payments.

Sanchez told Rajoy he should have resigned.

“Nobody has ever accused me of appropriating anything,” an angry Rajoy shot back. “I don’t devote myself to politics for money, Mr. Sanchez.”

Sanchez also accused Rajoy of lying by saying Spain had avoided a bailout under his tenure. While Spain dodged a sovereign bailout in 2012, it did receive around €40 billion in European aid for its nationalised banks.

Rajoy turned down invitations to take part in debates with the up-and-coming parties, agreeing only to debate with Sanchez. Spanish media said it may be the last time that only PP and the Socialists take part in an election debate given Spain’s transformed political landscape.

Pablo Iglesias, leader of anti-austerity Podemos, said the debate was an anachronism. “It was a debate in black and white … We have seen something that forms part of the past. The two-party system no longer exists.” he said.

Spain is holding a national election on 20 December.

The centre-right People's Party (PP) and the Socialists are seeing their decades-old hold on power threatened by the rise of two new parties, the liberal Ciudadanos (Citizens) party and left-wing Podemos ("We can") after years of economic crisis.

An official poll published in December showed the PP getting the most votes in the election, but falling well short of a majority in parliament.

With many voters still undecided, the most likely outcome appears a coalition or minority government.