Croatia’s conservative president narrowly made it to a run-off election against a centre-left former premier on Sunday (22 December), after a nationalist folk singer won over a large chunk of her camp’s far-right wing.

The hotly contested first round vote signalled the appeal of populism in a Balkan country struggling with an influx of migrants at its borders, an emigration exodus and widespread corruption.

It also leaves Croatia waiting to know who will be head of state as the country takes over the European Union’s rotating presidency in the new year.

With nearly all ballots counted, centre-left former prime minister Zoran Milanović took the lead with 29.5% of the vote, according to the electoral commission. 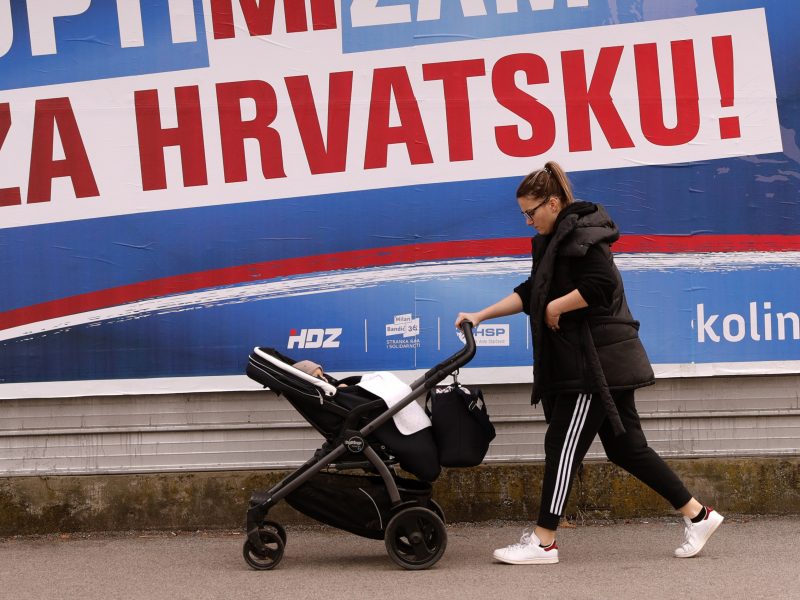 A nationalist folk singer and a leftist former premier are challenging Croatia’s conservative president in a close election race on Sunday (22 December) that could loosen her camp’s grip on power.

Škoro, whose patriotic folk tunes were a hit in the 1990s, won nearly a quarter of the vote with campaign promises such as pardoning a notorious war criminal and deploying troops to stop migrants at the border.

Though Škoro’s nationalist pledges didn’t push him to round two, analysts said the strong showing revealed a clear shift to the right among Croatia’s electorate.

As Grabar-Kitarović addressed supporters late Sunday, the 51-year-old urged them to unite for the run-off on 5 January.

“Now we have to get together and let’s go for a victory!” she said, this time describing her opponent Škoro as a “co-candidate on my political spectrum”.

Grabar-Kitarović became Croatia’s first female president — a largely ceremonial role — in 2015 with the backing of the centre-right HDZ, which has led Croatia for most of the past three decades.

She has often wavered between representing moderates and pandering to the nationalist faction.

If she fails to unite the two wings of the party in the run-off, analysts say it would spell trouble for HDZ’s moderate Prime Minister Andrej Plenković when he faces general elections next year.

“The radical right showed its force,” said political analyst Tihomir Cipek, adding it mirrored trends in other parts of Europe.

“We will see whether it will be repeated in the parliamentary elections,” he said.

In the meantime, Plenkovic’s government will be tasked with holding the EU presidency for a six-month term, with thorny issues like Brexit and the Western Balkans’ membership bids on the agenda.

The left appeared to rally around Milanović, a 53-year-old who served as prime minister from 2011 to 2016 and hails from the Social Democrat opposition.

Considered driven by supporters but pompous by critics, he has been trying to make a comeback with a promise to make Croatia a “normal” liberal democracy with an independent judiciary and respect for minorities.

“We are going into a second round and not a war, wars are over,” he told supporters after Sunday’s vote, in an apparent reference to his rivals’ frequent references to Croatia’s 1990s independence war.

“I want a country of equality,” he added.

While Croatia is known globally for its stunning coastline and island getaways, the Adriatic country is no paradise for locals who are fed up with a sluggish economy and rampant corruption.

And yet the campaign was light on policy ideas with many candidates instead attacking each other with war-era grievances.

“They stole the space for issues of vital importance to most people’s lives, including the young who are leaving in increasing numbers,” lamented Matija Horvat, a 27-year-old economist.

The government has struggled in particular to curb the outflow of Croatians who are packing their bags for better pay and professional opportunities in wealthier EU states.

Many who leave also cite the culture of nepotism and corruption at home, plus poor public services, as key motivations.

Labour gaps have started to affect key industries like tourism, which accounts for a fifth of Croatia’s GDP.

At the same time, authorities have taken a hardline stance against migrants from Asia, the Middle East and North Africa who have been trying to slip into its borders on the way to Western Europe.