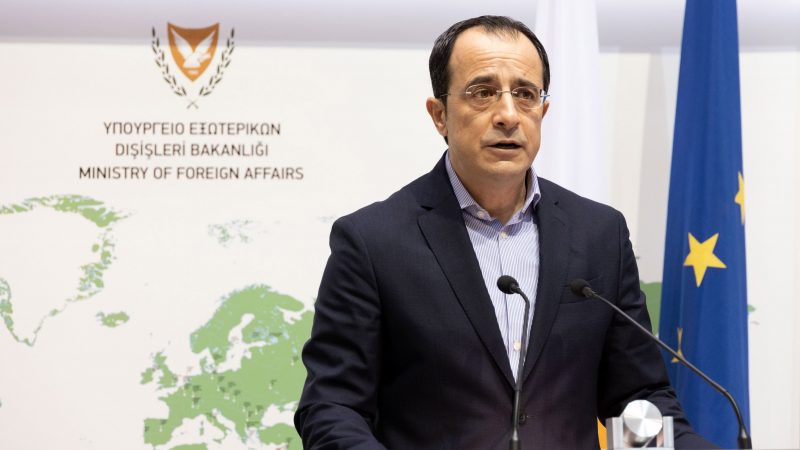 Cyprus Minister of Foreign Affairs Nikos Christodoulides announces his resignation during a press conference at the Foreign Ministry in Nicosia, Cyprus, 9 January 2022. Christodoulides expressed his interest in running for the 2023 presidential elections. [EPA-EFE/KATIA CHRISTODOULOU]

Cypriot Foreign Minister Nikos Christodoulides said on Sunday (9 January) he had tendered his resignation, in an internal power struggle within the ruling right-wing conservatives on their candidate for presidential elections in 2023.

Christodoulides, appointed in March 2018, has long been viewed as harbouring presidential ambitions, causing friction within his own Democratic Rally party. On Friday party leader Averof Neohytou, who is seeking his party’s nomination in the presidential race, urged Christodoulides to clarify his intentions.

In a statement, Christodoulides said he would be ‘interested’ in the presidential election next year but that he was not yet ready to take a definitive decision.

“I will make an announcement when I take my final decisions,” Christodoulides said.

The Rally party is to start the nomination process for its candidate on Monday. Christodoulides’s silence on persistent rumours he has been eyeing the presidency caused disquiet in the Rally party’s ranks that his potentially independent bid could be divisive.

Christodoulides said his resignation would take effect on 11 January. He said he had submitted his resignation to Cypriot President Nicos Anastasiades ‘some days ago’ and it was accepted on 7 January. Christodoulides is well known to the Brussels press corps from the time he was the spokesperson of the Cypriot Presidency in the second half of 2012.

Together with France and Romania, Cyprus is among the three EU countries represented at EU summits by its President.