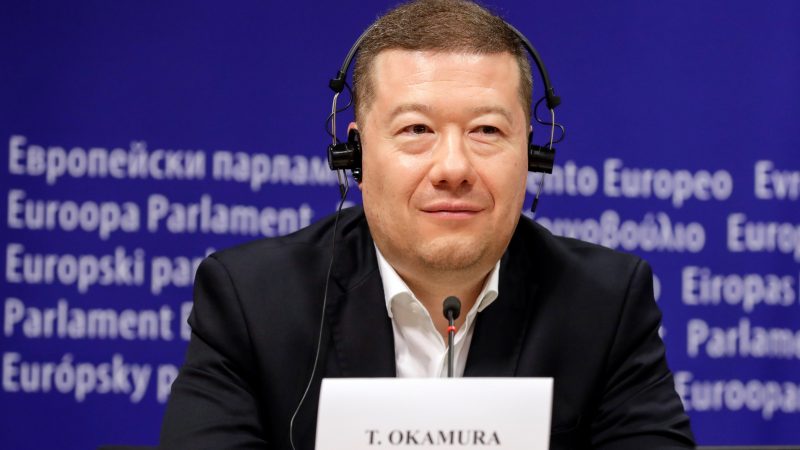 The far-right SPD party, which may play a role in forming a new Czech government next month, would demand the cabinet propose legislation that could lead to a referendum on leaving the European Union, party chief Tomio Okamura said on Wednesday (22 September).

Prime Minister Andrej Babiš’s populist, pro-EU ANO is likely to win the largest share of the vote in the 8-9 October election but may struggle to form a majority as its current partners are polling at or below the 5% threshold to enter parliament.

Two main opposition groups refuse to enter a government with Babiš due to what they say are his conflicts of interests as the founder of a business empire.

That may make Okamura’s anti-European and anti-NATO SPD, or Freedom and Direct Democracy, a partner in the talks, which ANO has not ruled out. Opinion polls put the party’s support at around 10%.

Okamura said a pledge to propose a law on holding referendums, currently not possible, would be his price. Should such legislation be introduced, it would likely allow for a citizens’ petition to propose a vote, meaning Okamura could help organise one.

“One of the fundamental conditions is for the government manifesto … to include a referendum law including the possibility of a referendum on leaving the EU or potentially NATO,” Okamura told reporters after meeting President Miloš Zeman, whose role will be to moderate post-election negotiations and appoint the prime minister.

SPD has promoted leaving the EU and an EU exit referendum for years. An opinion poll by the CVVM agency in July showed 66% of Czechs supporting EU membership, while 28% said the country should not be in the EU.

Past attempts to enact a referendum law have stalled in parliament but Okamura’s move may put it back on the agenda — despite what appears to be significant obstacles in its path.

Babiš’s government has opposed a general referendum law that would allow voting on issues such as EU membership. The government has also argued for high thresholds of signatures for referendums to be called.

Any proposed legislation on referendums would need a constitutional three-fifth majority in both houses of parliament, which would be hard to achieve if the legislation is divisive, given the pro-EU opposition controls the upper house, the Senate.

The Senate is elected in a staggered way over six years, and under a first-past-the-post system which usually eliminates extreme candidates.