By Agata Palickova | EURACTIV.com with AFP

Thousands of demonstrators gather to protest against Czech Prime Minister Andrej Babis and new minister of justice, in the one of the biggest political demonstration against the government since the fall of communism in 1989 during Velvet Revolution, at the Letna plain in Prague, Czech Republic, 23 June 2019. [Martin Divisek/EPA/EFE]

The 64-year-old billionaire was charged last year in connection with a two million euro EU subsidy scam, while an audit by the European Commission ruled that he has a conflict of interest as a politician and entrepreneur.

The Czech government said earlier this month there were “errors” in the audit from Brussels and Babiš has refused to budge.

“Judging from the aerial photos, it looks like we’re about 250,000. We’ll see how many more people will still arrive,” said Mikulas Minar, head of Million Moments for Democracy, the NGO organising the protest, as it got underway.

Police told AFP they would keep their estimate of the size of the crowd “for internal use”, but mobile operator T-Mobile said on its website its estimate based on network data was “over 258,000” people.

‘Million Moments for Democracy’ launched a petition, already signed by more than 400 000 people, demanding the resignation of Babiš and Justice Minister Marie Benešová. It is also calls for stopping the control of the media and the subsidies and tax breaks for Agrofert company.

“This situation is unacceptable. We cannot accept to have a prime minister prosecuted in an clear conflict of interests. Our president and prime minister are creating an environment dominated by arrogance of power, ignoring people in need, destroying nature and populism flourishing,” said speaker of the NGO Benjamin Roll.

“We’re fed up with what Babiš is doing, how he manages the country,” Mila Stiburkova, a 39-year-old sales manager from the central Czech town of Sazava, told AFP.

“We don’t like him pocketing money, fooling people who trust him and getting away with it,” added Stiburkova, who like many protesters, travelled to Prague for the event.

Today, 200 000+ marched in Prague to protest corruption scandals of the Czech Prime Minister.
Largest demonstrations since 1989. Not about policy, really about one man and his governing and criminal record. pic.twitter.com/6NDO7C8Ad1

Babiš, the second wealthiest Czech according to Forbes, leads the centrist populist ANO movement, which, despite the controversy, won May’s elections to the European Parliament. 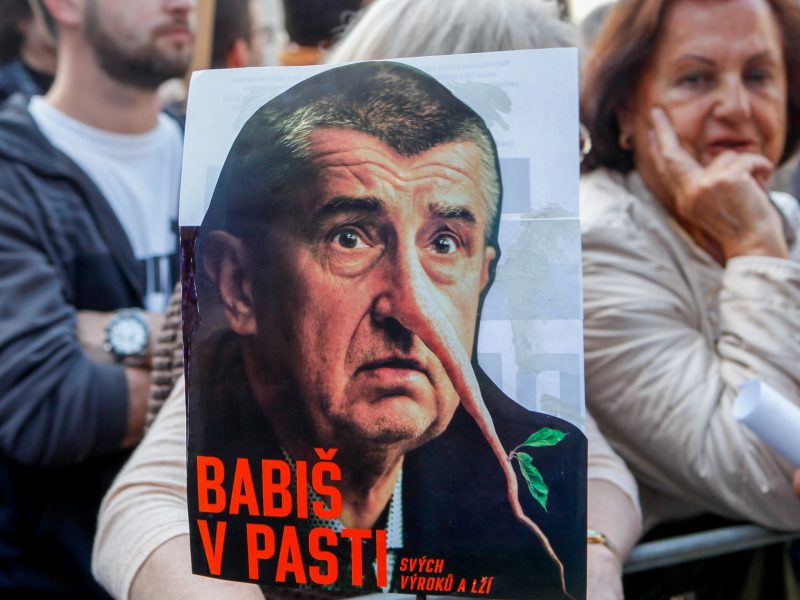 Czechs will start voting Friday (24 May) in the European Parliament election, with the party of their embattled billionaire prime minister set to win amid expected low turnout and despite protests against his cabinet.

ANO, affiliated to the European liberal family, took office after winning the 2017 general election campaigning on an anti-corruption ticket in EU and NATO country of 10.6 million plagued by graft.

It teamed up with the leftwing Social Democrats to form a minority coalition with tacit backing from the Communists for a parliamentary majority.

Babiš, a former Communist, is the first politician since the 1989 fall of Communism in former Czechoslovakia to let the Communists have a role in government.

The Slovak-born 64-year-old is facing charges over EU subsidy fraud after allegedly taking his farm out of his sprawling Agrofert holding to make it eligible for an EU subsidy.

The EU is probing his dual role as a politician and entrepreneur, and Babiš also faces allegations that he served as a secret Communist police agent in the 1980s.

Despite the allegations, which Babiš fervently denies, ANO — described as a one-man party by critics — enjoys a steady 30% voter support in opinion polls.

“It was a very colourful crowd of people, which spoke about the independence of justice today, meanwhile they were sending me to the prison and our President to the coffin,” said Babiš about the demonstration.

Agricultural topics and destroying of nature were heavily discussed topics at the demonstration, especially because of the Prime Minister’s connection to the company Agrofert, which brings together companies in the chemical, agriculture, food, forestry, timber, land technology, transport, renewable (biofuel) and media sectors.

A spokesman from the agricultural sector highlighted the Czech veto at the EU summit on Thursday. Together with Hungary and Poland, the Czech Republic have vetoed climate action plan to go carbon neutral by 2050.

“Our Prime Minister with his veto is killing the future of our children. His company Agrofert is a great protagonist of big industrial farming, which is the main cause of degradation of agricultural land, it is cause of water and wind erosion, cause decrease of biodiversity and drought,” said one of the farmers, Daniel Pitek.

“I don’t understand how this man (Babiš) can go on. His political ambitions are in conflict of interest with everything. He’s abusing all subsidy and incentive systems, tax reliefs,” Martin Peroutka, a 45-year-old businessman from the northern town of Usti nad Labem, told AFP.

“The protests should continue, it’s an expression of democracy,” he added.

Minar announced the next protest rally for 16 November, a day before the 30th anniversary of the Velvet Revolution that brought Communism down.

But he said protests might also be held earlier if needed.

Two rallies with more than 500,000 people each were held on the Letna plain on a hill near the Prague Castle during the Velvet Revolution that propelled dissident playwright Vaclav Havel to the Czechoslovak presidential seat.

“We are not making revolution as in 1989, we are warning against the direction our country is taking under the leadership of Babiš and Zeman,” said Benjamin Roll.

Sunday’s rally is the latest in a series of protests against Babiš and new Justice Minister Marie Benešová, which started as she took office in April.

The organisers, who fear Benesova was appointed to clear Babiš of his charges, brought about 100,000 protesters to Prague’s central Wenceslas Square in early June as the protests gradually increased.

“Our fears were confirmed when the new Justice Minister Marie Benešová stepped on the side of our Prime Minister and without any evidence said that she believes him, that he is innocent,” said Mikuláš Minář.

The institutional crisis could be also illustrated by a post by the official spokesman of the Czech president, who wrote: “We perceive this manifestation at Letná as a positive thing, that “independent” mainstream journalists could experience something like a collective orgasm. It was a kind of psychotherapy in this endless terror of constant losses in the elections.”

Babiš told the Czech news agency CTK on Sunday that he “absolutely disagreed” with allegations that he was tampering with the independence of the Czech judicial system.