Czech President Miloš Zeman and his wife Ivana Zemanova receive a bouquet of flowers as they celebrate his victory in the presidential election run-off in Prague, Czech Republic, 27 January 2018. [Filip Singer/EPA/EFE]

The former communist scored 51.36% of the vote, edging out his liberal pro-European challenger Jiří Drahoš with 48.63%. 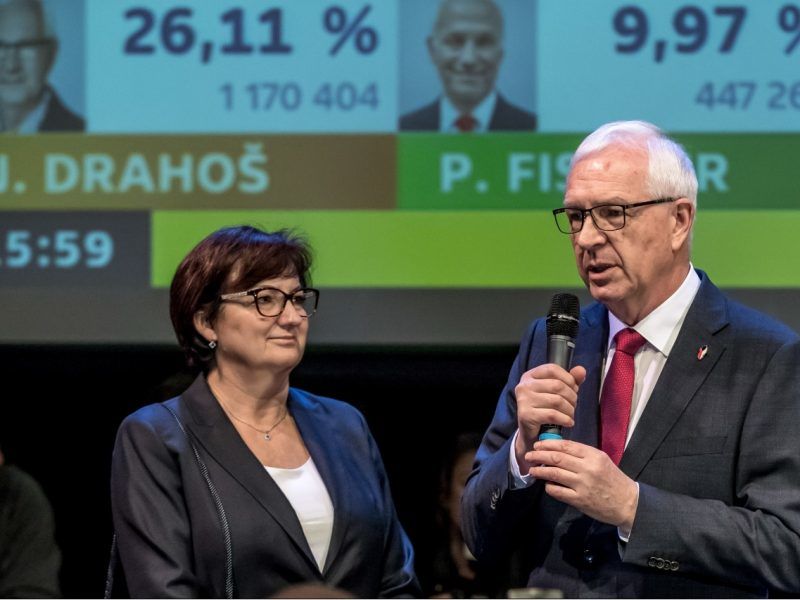 Analysts saw the election as a tug-of-war between East and West in Czech society, which is also rather eurosceptic with fewer than one in five Czechs happy with EU membership 13 years after the former communist country joined the pan-European bloc.

“Zeman’s election threatens to weaken our ties to the West and boost our Eastern ties,” Josef Mlejnek, a political analyst at Charles University in Prague, told AFP.

“It’s… also about possible closer cooperation with Hungary and Poland,” which are at odds with the European Union over a range of issues, Mlejnek added.

Russian President Vladimir Putin was among the first to congratulate the 73-year-old Zeman, with Putin’s Chinese counterpart Xi Jinping quick to follow suit.

The election campaign centred on migration, which is practically non-existent in the economically successful country of 10.6 million people, and on character issues, with Zeman’s critics saying the outspoken president lacks decorum.

In the wake of the 2015 migrant crisis in Europe, the anti-Muslim Zeman staunchly opposed EU quotas designed to distribute asylum seekers across the bloc.

Milos Zeman, the President of the Czech Republic, attended a rally against refugees and Islam in Prague on Tuesday (17 November) on the anniversary of the 1989 Velvet Revolution, which peacefully toppled Communism in then Czechoslovakia.

Even though the country has received only 12 migrants under the EU quota system, migration was a key campaign issue with a majority of Czechs against taking in asylum-seekers.

Zeman’s narrow victory highlights a deep split in the Czech Republic, similar to those seen in other countries with nationalist and populist leaders including the United States, Poland and Hungary.

A former leftist prime minister, Zeman attracted poorer rural voters with a lower education level, while the academic Drahoš, 68, is a political novice who appealed to wealthier, well-educated urbanites.

“He often meets with the people and doesn’t travel abroad so much. He has taken good care of the country and I expect him to continue like this.”

But Ondrej Balik, a young shop assistant, was upset with the result, saying Czechs picked a leader who “hasn’t been a good president.”

“I suppose I’ll be upset for the next five years. I was also upset with the (October) parliamentary elections. I think this isn’t good for young people like myself,” he told AFP.

Babiš’s ANO took October’s general election by storm, winning 78 of parliaments’ 200 seats with its anti-corruption campaign, but is now struggling to form a government.

Potential coalition partners turned their backs on the Slovak-born chemicals, food and media tycoon over the fraud charges, forcing him to form a minority cabinet of ANO members and non-partisan technocrats.

The cabinet had to resign after losing a parliamentary confidence vote on 16 January, and lawmakers also stripped Babiš of his immunity as an MP, leaving him vulnerable to prosecution.

Days before the presidential election, Zeman gave Babiš a second shot at forming the cabinet, which will require another vote of confidence.

He also promised to give him plenty of time to cobble together a government.

Babiš in turn endorsed the incumbent before both rounds of the presidential election.

But analysts are cautious about their camaraderie.

“Miloš Zeman has achieved his goal and he won’t need Andrej Babiš any more. If I were in Babiš’s place, I would be careful rather than happy,” said independent analyst Jiri Pehe.

Babiš’s potential partners include the Social Democrats, the Communists and the far-right SPD party whose Tokyo-born leader Tomio Okamura celebrated Zeman’s victory at his election headquarters.

“Zeman will want a greater say in forming the cabinet, in fact he will want to become another coalition party and he may want his people in the cabinet,” Mlejnek said.