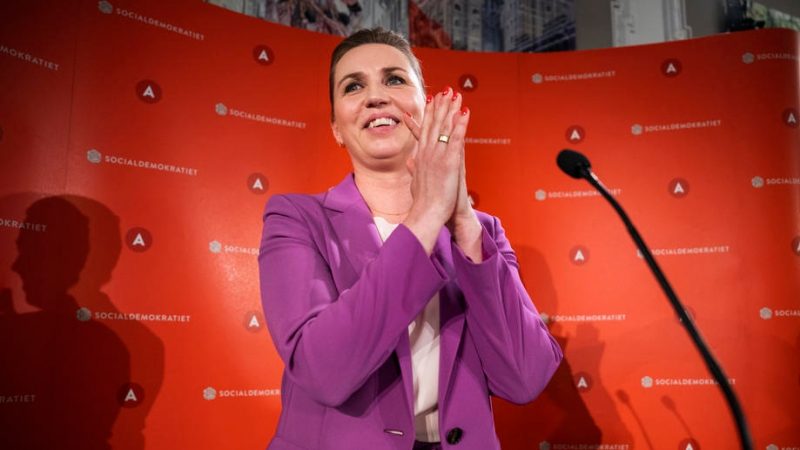 Mette Frederiksen, Danish Prime Minister and Chairman of the Social Democratic Party speaks to members of her party in the parliament in Copenhagen, Denmark, 1 June 2022. Danes voted yes in a referendum on the EU-defense opt-out that will determine if the country joins the EU's Common Security and Defense Policy leaving behind 30 years of defense reservation, as a response to Russia's invasion of Ukraine on 24 February. [EPA-EFE/MARTIN SYLVEST]

Denmark will join the European Union’s defence policy after a referendum on Wednesday (1 June), final results showed, signalling the latest shift among Nordic countries to deepen defence ties in response to Russia’s invasion of Ukraine.

Denmark is the only EU member that is not part of the bloc’s defence and security policy. The referendum marks the first time a government has succeeded in abolishing one of several exemptions secured in a 1993 referendum on the Maastricht Treaty.

Final results showed almost 67% of voters were in favour of removing an opt-out to the EU’s so-called Common Security and Defence Policy (CSDP), in what was the largest recorded show of support in a referendum on an EU matter in Denmark.

Around 33% of voters polled were opposed.

The vote to abolish the opt-out is a win for those in favour of greater EU-cooperation, while those against have argued that the EU’s defence pact is strained by bureaucracy and that Denmark’s participation in EU military operations will be too costly.

“We have sent a signal to our allies in NATO, in Europe. And we have sent a clear signal to (Russian President Vladimir) Putin,” Prime Minister Mette Frederiksen said late on Wednesday after most votes had been counted.

“When Putin invades a free and independent country, when Putin threatens peace and stability, we all move closer together,” Frederiksen said.

While not an outcome that will have major practical implications for the European Union, the result will be viewed positively in Brussels, said Christine Nissen, researcher at the Danish Institute for International Studies.

“It is part of a general trend right now, where countries are moving closer together,” Nissen told Reuters.

In historic policy shifts, Sweden and Finland this month decided to apply for NATO membership, while both Denmark and Germany have already promised to sharply raise defence spending.

Denmark is a founding member of NATO, but the alliance’s biggest military power, the United States, has signalled European allies must take greater responsibility for their own security.

“The United States has said it very clearly. I think it makes good sense to be part of that cooperation instead of constantly hoping for the U.S. to come,” said Conservative People’s Party leader Soren Pape Poulsen.

In the CSDP, Denmark would be able to take part in joint military operations, such as those in Somalia, Mali and Bosnia and Herzegovina, and to cooperate on acquisition of joint military capabilities.