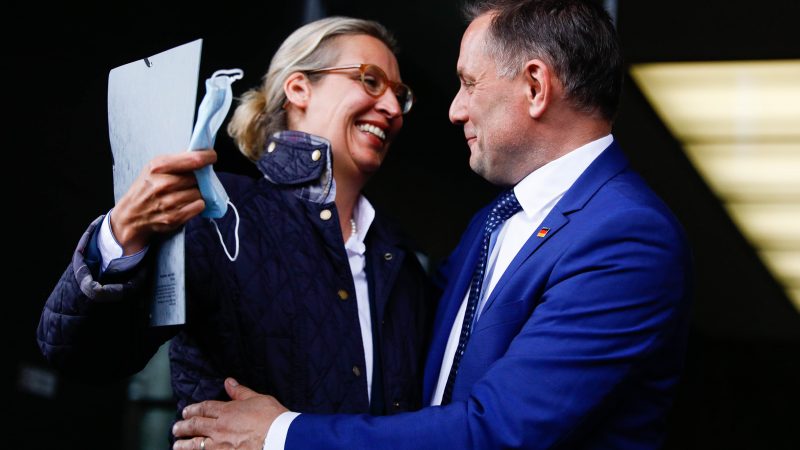 Hardliners Tino Chrupalla and Alice Weidel have been elected to lead the far-right AfD into Germany's September election. [EPA-EFE/FILIP SINGER]

Germany’s far-right Alternative für Deutschland (AfD) has selected two hardliners from the extreme right-wing of the party, Alice Weidel and Tino Chrupalla, as its top candidates for September’s election.

The duo emerged as the clear favourites in a membership ballot, receiving 71% of the votes. Just 48% of members cast a ballot in the vote on Tuesday (24 May).

Parliamentary co-leader Alice Weidel and co-chairman Tino Chrupalla ran for the party’s extreme far-right wing, which is based in the eastern state of Thuringia and led by Björn Höcke, who is currently under surveillance by the country’s domestic intelligence agency.

Party splits deepened at a conference in April, with moderate Joana Cotar failing in a bid to bring the far-right wing back into the fold under her leadership.

The moderates, led by MEP Jörg Meuthen, put forward Cotar and Joachim Wundrak to lead the party into September’s election but were beaten by hardliners Chrupalla and Weidel, who then declared the dispute over the party’s future direction to be over.

Meuthen wished the duo luck for the campaign.

“The result is a clear victory for the radical far-right movement, [known as] the ‘wing’,” political scientist Albrecht von Lucke told tagesschau24, adding that Meuthen had suffered a bitter defeat.

Germans will vote in a parliamentary election on 26 September. Recent polls suggest the AfD can hope to match its 2017 election result, when it got 12.6% of the vote after campaigning heavily against immigration.

The far-right party is set to focus its campaign on the impact that the COVID-19 pandemic has had on the economy, claiming that restrictions introduced to curb the spread of the virus were “excessive.”