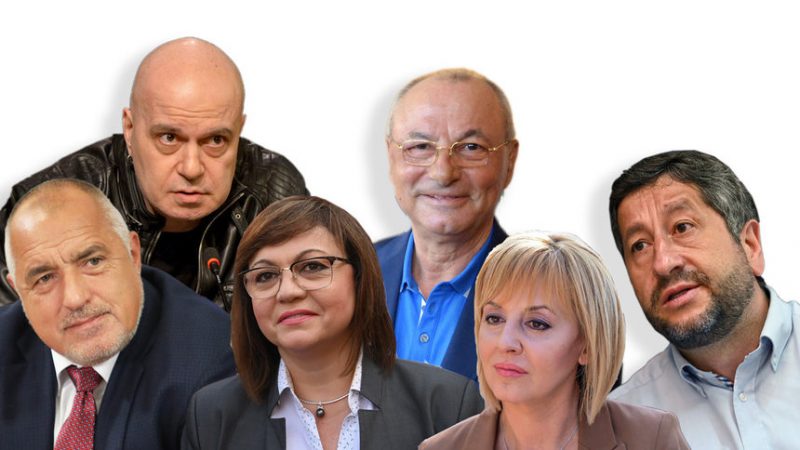 Combo picture of the main players in the Bulgarian 4 April elections. From left to right: PM Boyko Borissov, leader of GERB, Showman Slavi Trifonov, leader of “There is such a country”, Kornelia Ninova, leader of BSP, Ahmed Dogan, historic leader of DPS, Maya Manolova, leader of “Stand Up.BG”, Hristo Ivanov, co-leader of Democratic Bulgaria. All of them have doctors in their lists. [Dnevnik]

Bulgarian doctors who gained media prominence during the COVID-19 health crisis are now being courted by political parties ahead of the 4 April general elections, and the names of many medical professionals appear on the slates of different political forces.

Bulgaria has already seen athletes, showmen and other celebrities join the political sphere, as have many other countries. This time, with COVID-19 continuing to be the dominant issue facing the country and in the media, Bulgarian politics are experiencing an unprecedented “doctorisation”.

The most prominent example is the Minister of Health, Kostadin Angelov, a medical doctor and a former head of clinic, who will head the ticket of the ruling GERB party in the cities of Varna and Veliko Tarnovo.

Angelov is known from the TV screen for presenting the “official” views about the pandemic. But in Varna, Angelov will face off against another doctor, Atanas Mangarov, the most ardent critic of the official government line, who gained notoriety by preaching herd immunity instead of confinement.

Mangarov will lead the lists of a smaller political force, the leftist ABV, in Varna and in Sofia.

Another well-known doctor-turned-politician is Andrey Chorbanov, head of the Laboratory of Experimental Immunology at the Bulgarian Academy of Sciences, who joined the political party of TV showman Slavi Trifonov, called “There is such a people”.

Trifonov, although a newcomer in politics, is expected to poll strongly and take his party to the third position, after GERB and the socialists, according to opinion polls.

The centre-right Democratic Bulgaria will also feature a popular doctor – pulmonologist Alexander Simidchiev, who will compete in the capital, Sofia.

The rising number of medical experts in the political race has been accompanied by a recent surge in the number of coronavirus cases in Bulgaria.

Critics of Prime Minister Boyko Borissov say he is trying to boost his public support by lifting pandemic restrictions. Despite the growth in morbidity rates and the delayed vaccination process, restaurants in the country reopened on 1 March, and from 1 April, night clubs will open.

Over the past week, Bulgaria has been recording around 2,500 infections per day, and the numbers of hospitalisations and deaths are also increasing. Additionally, Bulgaria ranks last among all 27 EU members in terms of the number of vaccinated people, with about 4.2% of the total population vaccinated with at least one dose.

According to the latest opinion polls from March 2021, with 28.5% of the votes, GERB leads its main rival, the Bulgarian Socialist Party (BSP) (23.2%), while third place will be contested between the ethnic Turkish Movement for Rights and Freedoms (DPS) (12.5%) and Slavi Trifonov’s “There Is Such A People” (13.3%).

The probability of a fragmented parliament is high, as six or even seven parties are above the 4% threshold and political analysts believe that whoever wins will struggle to put together a ruling coalition.

The polls forecast that Democratic Bulgaria will get 5.7% of the votes, the Coalition of the former National Ombudsman and deputy Maya Manolova “Stand Up.BG” – 4.5%, and the nationalist VMRO of Krassimir Karakachanov – 3.7%.

The “doctorisation” of political lists in COVID times is not an exclusively Bulgarian phenomenon.

As reported by Romania-Insider, two of the most active and cited health experts, Dr Alexandru Rafila, president of the Romanian Society of Microbiology and Romania’s representative at the World Health Organisation (WHO), and Dr Adrian Streinu-Cercel, manager of the Matei Bals Institute of Infectious Diseases in Bucharest, both secured seats for the winning Social Democratic Party (PSD) in parliamentary election last December.