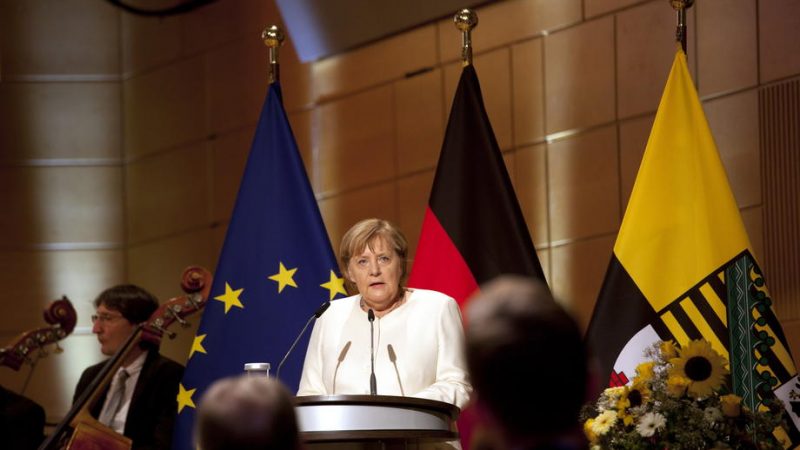 German Chancellor Angela Merkel speaks during a ceremony on the occasion of the Day of German Unity at Haendel Hall in Halle/Saale, Germany, 3 October 2021. [Pool/EPA/EFE]

Angela Merkel urged Germans on Sunday (3 October) to forge a common future that draws on their diverse backgrounds, harking back to the 2015 decision to admit 1 million refugees that was a defining moment of her long chancellorship.

Merkel appeared close to tears during an address to mark the 31st anniversary of reunification that may be the last before she steps down, although talks to build a new ruling coalition following last month’s election could take months.

She said the freedoms that came with German reunification 31 years ago had brought “so many new opportunities” for people from the former Communist East, where she grew up, but that many of them suddenly “found themselves in a dead end”.

With a voice that betrayed her emotion, she recalled how a journalist had written last year she “wasn’t a true born German” after she told reporters in 2015 that “if we have to start apologising” for showing a friendly face during the refugee crisis, “then this is not my country”.

“Are there two kinds of Germans and Europeans – the original and the acquired, who have to prove their affiliation every day anew and can fail the exam with a sentence like the one in the press conference?” she asked.

The 2015 refugee crisis, when Merkel opened Germany’s doors to some 1 million migrants fleeing war and poverty in the Middle East, was the most controversial act of her time in power and fuelled the rise of the far-right Alternative for Germany (AfD).

Asking, “what is my country?”, Merkel said “each and every individual must be able to feel heard and belong.”

She called for a Germany “in which we shape the future together”, adding: “Be open to encounters, be curious about one another, tell each other your stories, and tolerate your differences. This is the lesson from 31 years of German unity.”

Merkel described her decision last year, on the 30th anniversary of Germany’s reunification, to restrict civil liberties to curb the spread of the coronavirus as “one of the most difficult experiences” of her time as chancellor.

Merkel took power in 2005 – when George W. Bush was US president, Jacques Chirac in the Elysée Palace in Paris and Tony Blair British prime minister. She plans to step down once a new government is formed following last Sunday’s elections.