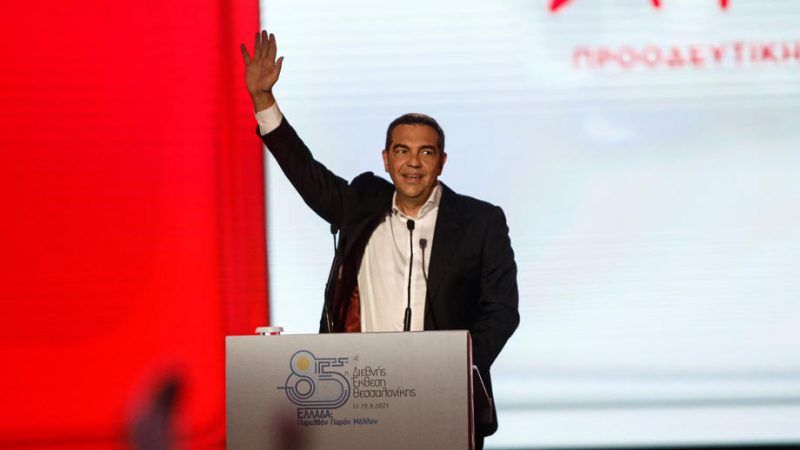 Prominent socialist politicians across Europe intervened in the conference via videos or sent letters of support to Tsipras’ call. [EPA-EFE/ACHILLEAS CHIRAS]

Currently in opposition, Tsipras lashed out against the ruling New Democracy party (EPP), saying its days are numbered.

“Within three years, Greece became a paradise for the oligarchs and hell for society,” Tsipras said.

The leftist politician called on Greek progressive forces to unite under the umbrella of his party ahead of the next national elections, following the governance example of Spain and Portugal.

Prominent socialist politicians across Europe intervened in the conference via videos or sent letters of support to Tsipras’ call.

On the same page with Tsipras

Greek Syriza party is affiliated with the European Left, however, Tsipras participates as an observer in the gatherings of the Party of European Socialists (PES).

PES’s official member in Greece is the Pan-Hellenic Socialist Movement (Pasok), which so far has not revealed its intentions regarding future collaborations in a coalition government.

But its leader Nikos Andoulakis has ruled out any scenario for collaboration with New Democracy under the rule of Mitsotakis.

Although in public, Brussels-based EU socialists avoid giving directions to national member parties on what kind of coalition alliances they should have, they insist that after the German elections, socialists should look at the progressive political spectrum.

“Pasok is our member, but ideologically, we are on the same page with Tsipras”, a PES source told EURACTIV last December.

According to the latest poll, New Democracy is still in the lead with 30%, followed by Syriza at 24.5% and Pasok at 12%.

The government has said elections will occur at the end of its mandate in more than a year, however, rising prices and social unrest may speed things up.

According to current polls, a single-party government is almost impossible after the next election.

Among the EU socialist politicians who intervened in the conference were Portuguese Prime Minister Antonio Costa, his Spanish counterpart Pedro Sánchez, the Deputy Prime Minister and Minister of Labor of the Spanish Left, Yolanda Diaz, as well as former Prime Minister of Italy and the General Secretary of Partito Democratico, Enrico Letta.

All socialist leaders called on progressives to join forces.

“We are living in very complicated times both in Europe and in the rest of the world after the impact of the pandemic and the Russian invasion of Ukraine. That is why today, more than ever, we need the strengthening of progressive voices in order to be able to give fair answers,” Sánchez said.

Similarly, Costa called Tsipras a “friend” and said progressive forces are needed today for green and digital transition to leave no one behind.

“The more progressive heads of states we have at the Council, the more solidarity, equality, justice we can bring to all Europeans and not only to a few,” Costa said.

“Syriza’s political battle at the moment is a common battle for a Europe of Democracy, Freedom and Solidarity at a dramatic moment in European history,” Letta noted.