Gianni Pittella said there should be no more austerity at all, not less. [European Parliament/Flickr]

Speaking yesterday at the “Building the Progressive Future Together” event, EU socialist policymakers stressed there was a need for a progressive alliance to counter the rise of extreme and populist powers.

Faced with electoral defeats across Europe in France, Germany, Austria and the Netherlands, the socialists want to put an end to the great coalitions with right-wing parties at national level.

Getting away from EPP

Sergei Stanishev, President of the Party of European Socialists, told EURACTIV.com, “We have a clear distinguished vision from the European People’s Party […] in order to tackle the threats and populism the two big parties on the centre-left and centre-right need to show we are not the same.”

Referring to the German election, he agreed with the SPD decision to stay in opposition, as it will provide German social democrats with “a big opportunity for a strong comeback in the EU and national elections”.

The Bulgarian politician noted, however, that the picture of socialism in Europe varies, as in Portugal there was a “historical victory” for the socialist party.

Asked whether cooperation with progressive forces such as the left or the Greens should be also on a member state level, Stanishev avoided giving a clear answer.

“We are moving in our direction with our identity and ideas. I believe that in the next EU Parliament we will be the basis uniting the progressive powers that are based on progressive values, which does not mean we are becoming GUE or Greens.”

Stanishev focused on the need for an EU-wide social action plan with “concrete measures” which will change citizens’ lives.

The big fight will be the Multiannual Financial Framework (MFF) whose discussion will start next year.

For Stanishev, a youth plan and a strong cohesion package should be prioritised. 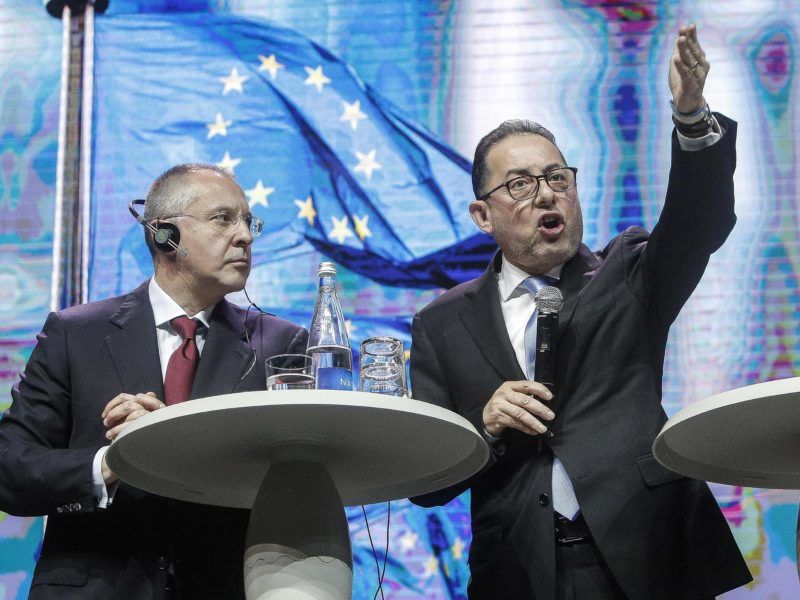 Socialism still has a long way to go. But following recent elections in various European countries, it is clear that progressive forces must regenerate themselves, write Gianni Pittella and Sergei Stanishev.

Gianni Pittella, the leader of the Socialists and Democrats Group in the European Parliament, was more outspoken regarding austerity, claiming that we shouldn’t just be saying less austerity, “we should be saying no austerity”.

He talked about a new left for a social Europe as well as a “great democratic challenge” to help EU citizens who have a sense of abandonment.

“We have to answer the question: what is the added value of being European […] we want to change Europe and not divide it,” Pittella noted.

The Italian politician recognised that the socialists have lost the elections in many countries and this is something to be considered, but there are many that share the socialist values.

“In order to change Europe a great socialist force is needed”.

Pittella stressed that the president of the European Commission should be elected directly and called for the Parliament to become a true EU legislature.

“It is now the only parliament in the world that has no legislative initiative.”

The S&D Group tweeted, “We are leftist and pro-European! We have to convince progressive forces that Europe is the horizon of the 21st century.”

Paul Mason, a left-wing British commentator, attacked neoliberalism and sent a message in favour of a shift to the left, against far right.

“Trump, AFD & UKIP want national neoliberalism. They’ll fail and when they do, they will blame migrants, feminism and minorities,” he said.