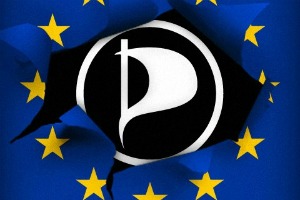 Pirate party representatives from more than 25 countries agreed at a conference in Prague to prepare a joint platform and campaign for the elections to the European Parliament in 2014, the Czech media reported.

The Pirate parties agreed last weekend to establish their own political group in the European Parliament if they succeeded in the 2014 elections, the Prague Daily Monitor wrote.

The document adopted at the meeting may launch the basis for a more unified European party, but it must first be approved by the parties in individual countries, said Mikuláš Ferjen?ík, chairman of the Czech Pirate Party, the ?TK news agency reported.

Besides the election of their leadership – the Pirate Parties International (PPI) – the delegates mainly discussed ways to strengthen their voice in politics and succeed in elections, building on the success of their Swedish and German colleagues (see background).

The PPI admitted the Croatian and Greek Pirate parties as new members. The Slovak Pirates also have applied for membership.

"We will coordinate the campaign and start working on a joint programme that we will share all over Europe," Ferjen?ík was quoted as saying.

European Pirate parties vow to promote a more transparent state and a larger share in decision-making for citizens, Ferjen?ík said, adding that they would also seek a reform of the intellectual property concept.

Pirate Parties primarily focus on the Internet freedom and on restricting copyright that they consider an obstacle to the free spread of music, films and computer programmes.

Most recently, Pirate parties drew attention for organising protests against the Anti-Counterfeiting Trade Agreement (ACTA), which, they say, will limit internet freedom.

The Pirate Party (Piratenpartei Deutschland), a new political force of internet freedom activists modeled on the Swedish Piratpartiet, have shaken up Germany’s political scene in only a few months.

According to a recent poll, Piratenpartei Deutschland has become the third political force with 13% of support, ahead of the Greens (11%), the Left (Die Linke, 8%) and the Liberals (5%). The same poll gives Chancellor Angela Merkel's conservative Christian Democrats (CDU) and its Bavarian sister party the Christian Social Union (CSU) 36% of  support, followed by the Social Democrats at 26%.

The German Pirate Party was founded in September 2006, just after the Swedish Piratpartiet. The Swedish party won 7.13% of votes in the country's 2009 European elections and has clinched two seats in the European Parliament - Christian Engström, who was elected straight away, and Amelia Andersdotter, who joined after the ratification of the Lisbon Treaty, which increased the number of MEPs.