Polls show MEP Mélenchon closing in on the frontrunners, 39-year-old centrist Emmanuel Macron and far-right leader Marine Le Pen ahead of the 23 April first round, adding new drama to a rollercoaster campaign.

After strong performances in two televised debates, several new surveys this weekend showed him climbing to third position, with 18-19% of voters saying they would vote for him.

Speaking in Marseille, Mélenchon said voters had a choice other than the extreme-right “condemning our great multi-coloured people to hate itself” and fans of the free-market that “transforms suffering, misery and abandonment into gold and money”.

Mélenchon rally in Marseille draws 70,000 people. French election seems to be the most unpredictable yet. https://t.co/EWTGofvZpO pic.twitter.com/pL8WnXSSUb

Left-leaning news magazine L’Obs commented that “the sudden emergence of Jean-Luc Mélenchon among the four candidates with around 20% has shattered all the predictions, (and) is sowing doubt among the favourites.”

Analysts say forecasting the two-stage election is even more difficult than usual, with an unusually high number of voters saying they plan to abstain or have not made up their minds. 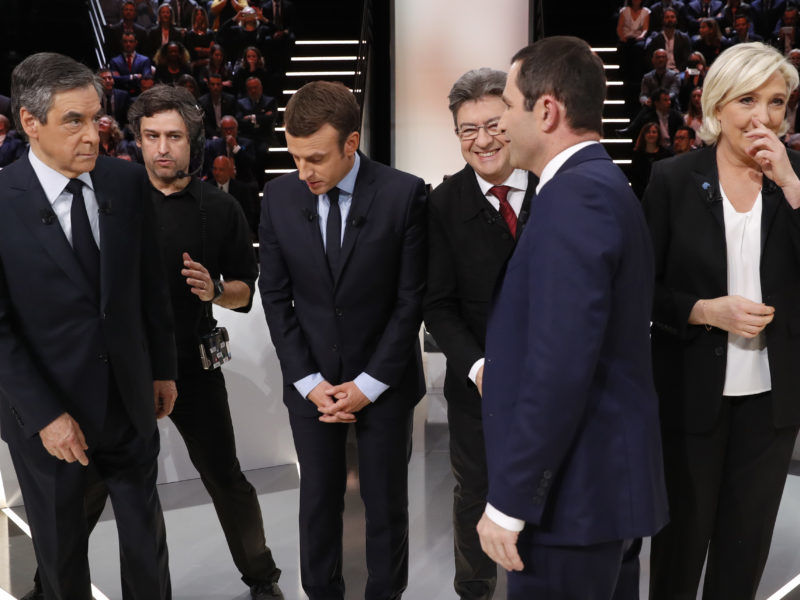 ‘Not asking you to love me’

Scandal-hit rightwinger François Fillon also held one of his biggest rallies so far, gathering thousands of supporters at a Paris conference hall.

The ex-premier is desperate to pick up momentum after a campaign dominated by allegations he paid his wife hundreds of thousands of euros for a fake parliamentary job.

One former minister and Fillon ally admitted to AFP on condition of anonymity: “If he doesn’t rise a few points (in the polls) this week, it’s over.”

Le Pen meanwhile sparked criticism from Jewish groups with an interview in which she denied the French state was responsible for the wartime round-up of more than 13,000 Jews at Paris’ Vel d’Hiv cycling track, who were then sent to Nazi death camps.

“I think that generally speaking if there are people responsible, it’s those who were in power at the time. It’s not France,” she told LCI television.

The CRIF umbrella grouping of Jewish organisations called the comments “an insult to France, which honoured itself in 1995 by recognising its responsibility in the deportation of France’s Jews”.

Le Pen and her closest allies had hit the airwaves on Sunday, selling their vision of a nationalist France, unburdened by the European Union and the euro currency and tougher on crime and Islamists.

Centrist Emmanuel Macron kept his position as favourite to win France’s presidential election after a televised debate on Tuesday night (4 April) in which he clashed sharply with his main rival, Marine Le Pen, over Europe, just 19 days before the election.

Her telegenic niece Marion Maréchal-Le Pen made a rare television appearance to deny reports of differences in the family, which led to speculation this week she might quit.

“I’m 100% behind Marine Le Pen,” she told BFM television, adding she planned to stand in parliamentary elections in June.

Macron meanwhile detailed what his priorities would be for his first few months in office, telling the Journal du Dimanche newspaper that one of his first measures would be to pass a law setting new ethical standards for parliament.

This would be followed by other legislation to cut the number of MPs by a third and to free up the labour market.

Asked about a slight fall in support according to surveys, he replied: “They show exactly what I feel: that nothing is decided yet. We are entering a crucial phase.”

In a sign that his team are growing anxious about the impact of Mélenchon, particularly among the young, supporters spread a video online set to techno music warning about the leftwinger’s huge tax-and-spend plan.

Mélenchon’s radical programme includes a new €100 billion stimulus plan and a reduction in the working week to 32 hours, as well as proposals to overhaul the EU and pull France out of NATO.

Polls published this weekend confirmed shifting momentum following last week’s final televised debate between the 11 candidates vying to lead France, with a survey for KANTAR Sofres-Onepoint even putting Mélenchon a point ahead of Fillon.

Le Pen and Macron are neck-and neck but both have lost ground slightly and would win 23-24% if the vote were held today.

This would mean both qualifying for the run-off scheduled for 7 May, which polls suggest Macron would win comfortably – although analysts caution against firm predictions.