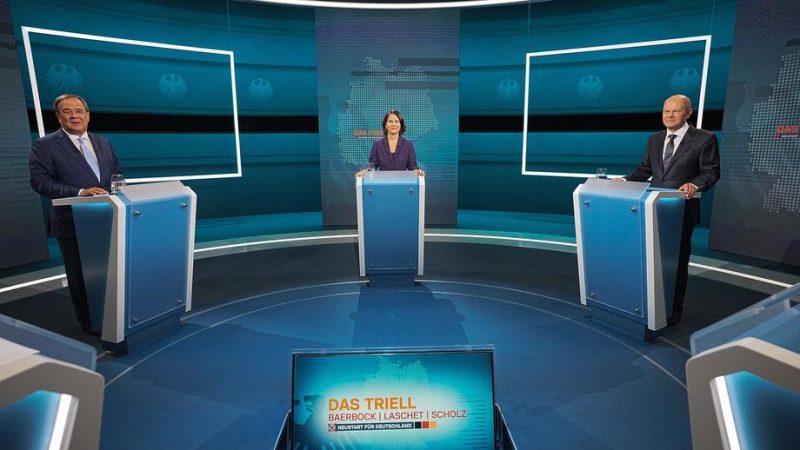 When Germans head to the polls on September 26 they will decide on who will shape Germany’s post-Merkel future. [EPA/MICHAEL KAPPELER]

When Germans head to the polls on September 26, they will decide on who will shape Germany’s post-Merkel future.

With recent polling suggesting that the race is still wide open, the three candidates, Armin Laschet of the conservative CDU/CSU, Annalena Baerbock of the Greens, and the Social Democrat Olaf Scholz all aimed at convincing voters of their vision of a future Germany during the debate that aired on n-tv and RTL.

Annalena Baerbock of the Green party pledged to put an end to the “years of standstill” and that a vote for her will be a vote for change and for a social-ecological green transition.

Armin Laschet on the other hand tried to sway voters with the complete opposite message and portrayed his party as an anchor of stability and reliability during uncertain and difficult times.

Olaf Scholz for his part took a balanced approach between his political opponents. While he emphasised the significance of putting a halt to climate change, he also stressed the need not to leave the industry out in the cold.

The topic that wasn’t mentioned: Europe

However, the debate was lacking any discussion over European issues or policies and was primarily focused on domestic topics.

There was only one brief mention of the European Union when the candidates argued about the ongoing evacuation of Afghanistan, where both Scholz and Laschet underlined the importance of a stronger European foreign policy, without going into the specifics of how this should be achieved.

The most contested topic of the night was how to best tackle climate change and shape the green transition. The discussion got especially heated between the CDU and Green lead candidates.

Baerbock accused Laschet of having “no idea” of what he’s talking about and emphasised the need for a coal and combustion engine phase-out by 2030 as the necessary means to foster climate protection.

Laschet however condemned the Green plans and called them dangerous for the industry. “You try to put the industry in chains and then tell them to run faster,” he accused his Green counterpart. He claimed that climate change can’t be simply addressed with regulatory means. Instead, the next government needs to aim at creating more market incentives for the industry to accelerate the green transition.

Scholz on the other hand took a conciliatory stance. While he stated that the green transition is the “biggest modernisation and economic project of our generation,” he also emphasised that climate protection can only be successful if driven by innovation and that the industry must be on board.

Baerbock however called Scholz’ focus on the industry “alarming” and emphasised that climate change is affecting everybody, not just the industrial players.

Laschet on the offensive

Another heated topic was the possible involvement of the Left party in a coalition with the SPD and the Greens.

Scholz refused to rule out such a coalition but stated that a commitment to NATO, a sovereign EU and economic growth are preconditions for any coalition talks, all topics that are heavily contested within the Left party.

Laschet heavily criticised Scholz’ hesitancy to categorically exclude the Left party from any coalition talks. “We have to take a clear stance in regard to extremists,” Laschet said, adding that “this is the biggest country in the European Union. The question of who is governing Germany is also deciding how Europe will shape up.”

Baerbock on the other hand ruled out a coalition with the Left party as long as they continue to boycott an active European foreign policy.

Laschet’s attempt to nail Scholz down on the topic follows calls from his party colleague and Bavarian Prime Minister Markus Söder, who said on Sunday that the CDU/CSU should now put the risk of a potential coalition on the left in the centre of the election campaign as an attempt to sway voters back.