A poster on the building of the socialist party, rue Solférino, says “Thank you” to François Hollande. Photo taken on 14 May 2017. [@stephdepierre/ Twitter]

After the Socialist Party’s dismal showing in the first round of France’s parliamentary election, an advert appeared on a property website offering the HQ of the party for sale “due to poor election results”.

It was a prank but after a drubbing in Sunday’s (18 June) second round vote, the future of the building may be up for discussion as the party tries to reinvent itself in a bid for survival.

The number of Socialist seats in the 577-seat chamber plummeted from 280 in 2012 to just 29, the lowest in the post-war Fifth Republic. Parliament’s lower house will be dominated by President Emmanuel Macron’s centrist Republic on the Move party that blew apart the traditional two-party system. 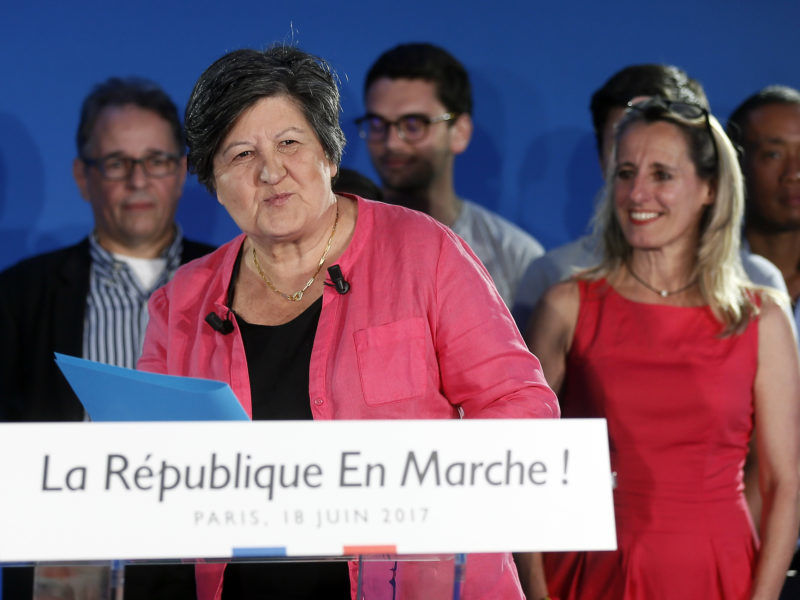 French President Emmanuel Macron’s centrist party swept to a large majority in parliamentary elections on Sunday (18 June), although it fell short of a predicted landslide.

The Socialists may be sidelined for years and will be a weak force in parliament where they have been a major obstacle to more liberal economics that investors hope Macron will now bring.

If the Socialists move to the left, to capture voters whose growing support of hard-left ideas has helped Jeremy Corbyn in Britain, they will compete with Jean-Luc Mélenchon’s France Unbowed.

The stunning demise reflects the wider struggle of left wing parties in Europe to overcome internal divisions and win votes.

Just five years after hailing the election of François Hollande as a new dawn for French Socialists, they will not even be the official opposition – the conservative The Republicans party will take that role.

“The collapse of the Socialist Party is beyond doubt,” Jean-Christophe Cambadélis said late on Sunday after announcing he would step down as party chief. “The president of the Republic has all the powers.”

Cambadélis said it was time to build “a new political force on the left.”

The crisis facing the Socialists has its roots in Hollande’s mid-term shift from being the self-proclaimed “enemy” of bankers and defender of workers to advocate of business-friendly reform.

Hollande’s move split the party, exposing a deep-seated rift between moderates and hard-left lawmakers, and when the reforms failed to spur the economy, the Socialists haemorrhaged support.

Hollande became the first postwar French president not to seek re-election. The party’s nominee, Benoît Hamon, adopted a message veering towards the far-left. But hard-left voters were already flocking to Mélenchon, while “progressive” party grandees inclined towards the centre jumped ship to Macron.

#France: @benoithamon eliminated in the first round of legislative elections in his hometown in #Trappes.

“The Socialist Party has been through crises before, but this one is unprecedented in size,” said historian and party member Denis Lefebvre.

An immediate concern for the Socialist Party will be its finances because of a sharp drop in public funding. French political parties receive government financing worth €1.42 each year for every vote won in the parliamentary elections and over €37,000 for every elected lawmaker.

The 2012 election results translated into €24.9 million last year, almost half its total budget, French media has calculated and that will now fall sharply.

The party has low debt but the loss of funding will mean scaling back operations just as it needs to reconcile rival factions after Hollande lost control.

The Socialist Party has faced near-death experiences before – in 1969, when it won just 5% of the presidential vote and in 1993 when it was all but wiped out as a major party in parliamentary elections, collecting 53 seats.

On both occasions the Socialists recovered but bouncing back this time may be more difficult.

The scale of Macron’s win pointed to widespread disillusion with the two main traditional parties. It also blew apart the left-right divide and left the Socialists boxed in between a powerful centrist party and a buoyant France Unbowed.

“From a strategic standpoint, they are wedged between Macron and Mélenchon,” said Antonio Barroso, an analyst at Teneo Intelligence. “And they’re a tarnished brand, part of the mainstream, part of the old politics.”

For decades, France’s fractured left was glued together by a common enemy on the right but Macron’s victory may split the party along its progressive-traditional socialist faultline.

Jim Shields, professor of French at Aston University, said the party had to reinvent itself if it is to survive.

“This means (the Socialist Party) facing up to its own ideological contradictions and forging a clear policy direction that no longer pays lipservice to the far-left in opposition while inclining to the centre in government,” Shields said.

Sebastian Denaja, a 38-year-old Hollande loyalist who lost his parliamentary seat in the first round said a new Socialist Party needed to be “social-democrat, European, green.”

He said there was still space for a reinvented centre-left party because Macon’s plans to cut public jobs and ease labour regulations showed that he was “pure right-wing”.

Others on the traditional left, led by Hamon, believe a rapprochement with Mélenchon, who rails against Europe and the rich and powerful, is possible.

But in a typically combative speech on Sunday night that contrasted sharply with the Socialists’ tone of defeat, Mélenchon, a former Trotskyist, showed no sign of wanting to work with the party he quit in 2008.

Hamon and Greens leader Yannick Jadot are due to launch a new movement on 1 July. Meanwhile former minister Christiane Taubira, Paris Mayor Anne Hidalgo and her Lille counterpart have launched a process of reflection called “From Tomorrow”.

It may be too late.

“There’s no reason now to support the Socialist Party,” said Sciences Po lecturer Thomas Guenole. “They can try and create a new party but will it be a satellite (orbiting around) Mélenchon or around Macron.”