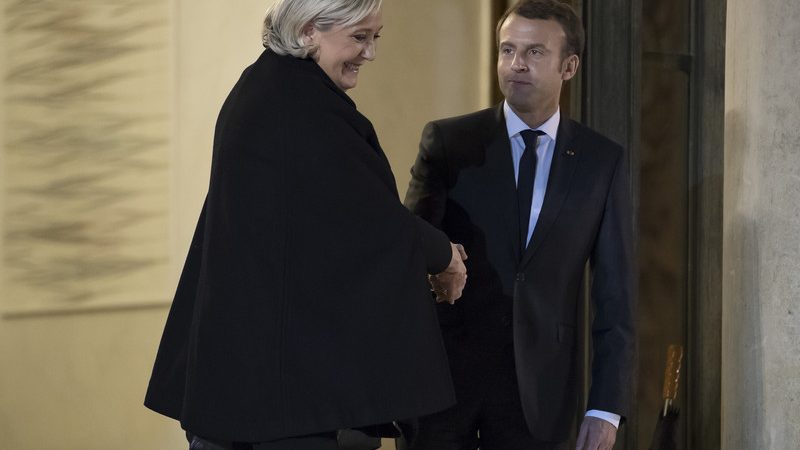 Emmanuel Macron and Marine Le Pen traded barbs Monday (18 April) as they returned to campaigning for the French presidency ahead of a prime-time debate that is likely to prove decisive ahead of Sunday’s second-round run-off.

After a brief Easter pause, the two rivals held low-key events as they paced themselves before Wednesday’s face-off when the centrist Macron will defend his record over the past five years against his combative far-right rival.

It will be a rematch of their debate in 2017 when the same two finalists clashed at the same campaign stage, but which most analysts say was handily won by Macron, who was making his first-ever attempt at public office.

Le Pen, making her third run for the presidency, insists she is better prepared this time around.

“I’m very confident, and I think I’m going to win,” the National Rally candidate said during a visit to the sunlit village square in Saint-Pierre-en-Auge in Normandy, western France.

“I hope this debate is carried out calmly… I hope it won’t be what I’ve been hearing for the past week, a series of insults, fake news and excesses,” she said.

“She knows her programme perfectly, and she knows very well how Macron will try to attack her,” Le Pen’s close ally Louis Aliot, the far-right mayor of Perpignan in southern France, told France Inter radio.

The latest opinion polls suggest that Macron has the edge, giving him scores of 53 to 55.5 per cent against 44.5 to 47 per cent for Le Pen.

But allowing for margins of error, Macron knows there is no room for complacency, and polls had often underestimated the results of far-right candidates in the past — most notably in 2002 when Le Pen’s father Jean-Marie Le Pen reached the presidential run-off against Jacques Chirac.

Macron aimed Le Pen’s proposal to hold constitutional referendums on stricter immigration laws and her plan for “national priority” for French citizens for jobs and welfare benefits and to create the possibility for citizens’ initiatives to propose and vote on legislation.

“She is implying that once elected, she believes she’s above the Constitution since she can decide not to respect it by changing the rules,” he told France Culture radio in an interview published Monday.

But instead of focusing on immigration and the threat of Islamist extremism, Le Pen has insisted mainly on her plans to tackle rising prices, a key element of her strategy of presenting a more moderate face to voters.

Her team has played down, in particular, a proposed ban on the Islamic headscarf in public places, with Le Pen acknowledging that it was a “complex problem” that would require parliamentary debate and that “I’m not obstinate.”

Le Pen’s team has also hit back at a report that the European Union’s anti-corruption body OLAF had accused her and senior colleagues of embezzling more than 600,000 euros ($650,000) of EU funds during their time euro-deputies.

Her lawyer, Rodolphe Bosselut, expressed suspicion at the timing of the release of the story, first revealed by the investigative website Mediapart on Saturday.

Polls suggest that up to a fourth of the French electorate might not vote at all on Sunday, and much will also depend on the decisions of the millions of leftwing supporters of Jean-Luc Melenchon. He finished in a close third place in the first round on April 10.

A survey Sunday carried out by Melenchon’s France Unbowed party showed that only a third of those who voted for him will back Macron to block a far-right presidency under Le Pen.

The rest preferred to return a blank ballot or said they would stay home.

Melenchon, poised to loom large on the left ahead of parliamentary elections in June in which Macron is hoping to renew a majority if re-elected, has pointedly refused to urge voters to back Macron, saying only that “not a single vote” should go to Le Pen.

Christophe Castaner, the leader of Macron’s Republic on the Move (LREM) group in parliament, attempted to play down the significance of the survey.

But he also warned: “Not to choose is to accept you are playing Russian roulette.”