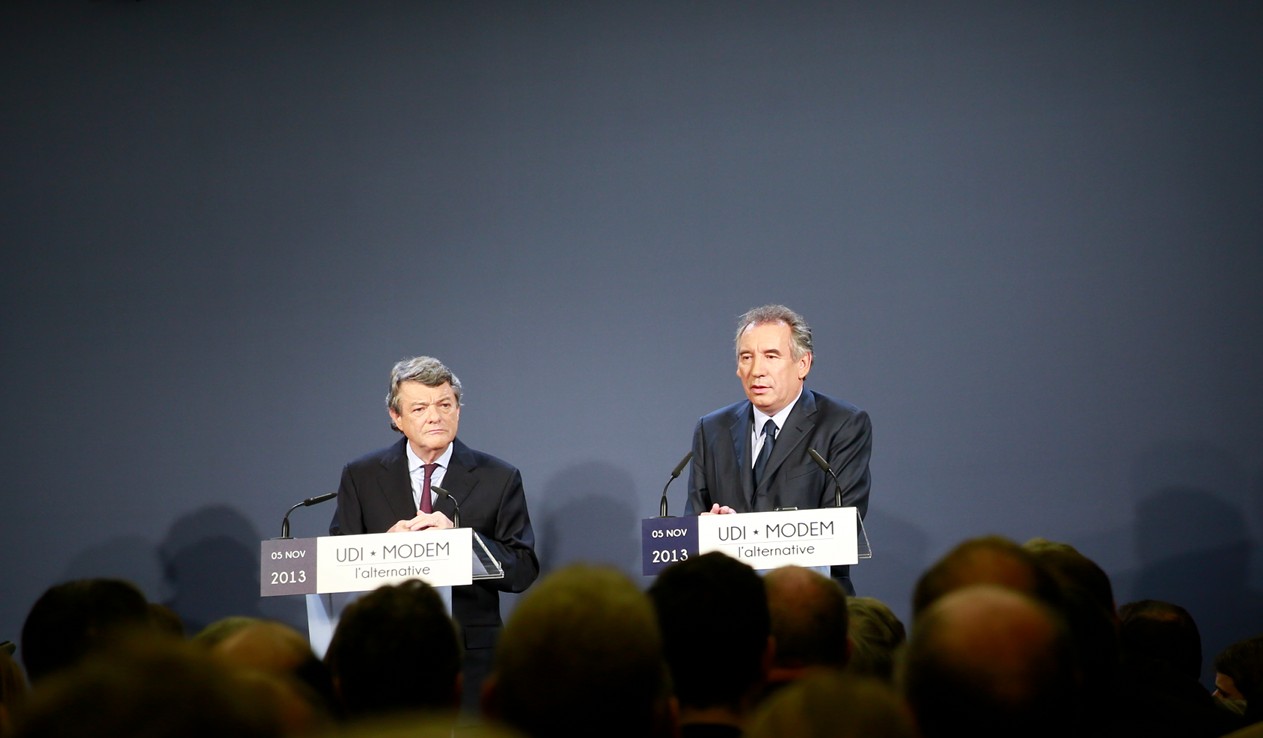 France's two main centrist parties, the UDI and the MoDem, announced a new alliance on Tuesday (5 November), with an eye on next year's European elections.

François Bayrou, of the Democratic Movement (MoDem) and Jean-Louis Borloo, of the Union of Democrats and Independents (UDI), the two party leaders, unveiled an alliance named 'The Alternative' in Paris yesterday (5 November).

The two politicians go back a long way. They were both members of the now defunct centrist Union for French Democracy (UDF), which lasted until 2007, when the UDF was replaced by Bayrou’s MoDem and Borloo founded his own party after participating in Nicolas Sarkozy’s centre-right government.

In August this year, the UDI leader contacted Bayrou proposing to join forces to strengthen the French political centre.

“The first thing that brings us together is Europe,” the two leaders said yesterday at the launch of 'The Alternative'.

And even though the term “Alternative” calls to mind the German “Alternative für Deutschland”, a far-right party opposed to the euro currency, Jean-Louis Borloo would rather think of the new alliance as “an alternative to the far-right, to the despair”.

“We offer an alternative to the political impotence and believe we can make a difference,” Borloo said.

Focus on the EU elections

The first important step for the new alliance will be the European elections in May next year. 'The Alternative' will propose common candidates for all elections – regional, national, European –, except the local election, which takes place in March.

'The Alternative' will present single candidates for the regional, national and European elections but not the local election, which takes place in March.

Borloo stressed the importance of France’s participation in the EU. “There are things that France can do but some are more difficult, like climate, energy, tax havens, and that’s why Europe is here”.

“There is an immense need to renew the European ideal. Europe is the only available way to authentic sovereignty,” Bayrou said.

Together, the two parties have 11 MEPs in the European Parliament, while the French Socialist majority has 14. But at EU level, the UDI is a member of the European People's Party (EPP), while MoDem is linked to the liberal ALDE group.

It is not yet clear which European Parliament group the new alliance will join after next year's EU election. Both the EPP and ALDE leaders have issued statements inviting the new centrist alliance to join their political formation (see Positions below).

Jean Arthuis, a French senator from the UDI, suggested that his party could leave the EPP and join the ALDE, which has followed a more federalist European agenda under the leadership of former Belgian Prime Minister Guy Verhofstadt.

Bayrou stood behind the Socialist François Hollande at the last presidential elections in 2012, a marked difference with Borloo's UDI.

Their common charter, signed on Tuesday, says that 'The Alternative' is a natural partner of the Republican right, "in respect of humanist values”.

The UMP, led by Jean-François Copé, openly flirts with the far-right’s electorate, however.

The charter also stipulates that “an alliance with the Socialist Party is impossible” but that the “broad reformist majority” that they believe France needs, could “open up to the Green and Socialist-Democrat sensitivities”.

The Alternative has some 100,000 members, 70 national MPs and 11 MEPs. They have some 4,500 local representatives, over which they do not yet appear ready to compromise.

Guy Verhofstadt, president of the Liberal ALDE group in the European Parliament, welcomed the new alliance.

“Such an alliance, which I have called for since the last presidential elections in France, is indispensable. This joint force establishes a real alternative for France and for Europe.

“The Group of the Alliance of Liberals and Democrats for Europe is at the disposal of this new alliance initiated by François Bayrou and Jean- Louis Borloo. Just seven months from now, the renewing of Parliament will mean a turning point in the perspective of reforms needed in the European Union. Standing together on joint lists, centrist and reformist forces in France will be able to provide clear and meaningful answers to the legitimate concerns of citizens in the face of our continent's economic and social crisis. These lists will alone carry a European conviction against the timidity and opportunism of socialists and conservatives, and illusory solutions of other populists and extremists," Verhofstadt said in a statement.

French MEP Joseph Daul, the president of the centre-right European People's Party (EPP), also welcomed the creation of The Alternative.

“A gathering of centrist parties is good news to sustain the democratic debate at a time when populism and euroscepticism are on the rise. As the president of the political group that brings together the parties of the right and center throughout the European Union, I can only welcome this 'reunification', under the aegis of the European spirit, after eleven years of separation.

“After the next European elections, I hope that MEPs from UDI which are already members of the EPP Group, can accommodate their new allies from the MoDem within our political family," Daul said. "The 'privileged partnership' at the national level between the Alternative and UMP should greatly facilitate the return of all the forces of the French right and center in the EPP Group, the first political force in Parliament”.

Far-right MEP Marine Le Pen denounced The Alternative as a pro-European, pro-immigration and pro-austerity party, which “at least has the merit to own up to its political and ideological options”.

The French political centre has been long divided.

Jean-Louis Borloo's UDI is clearly on the right wing of the political stage, having participated to the government of Nicolas Sarkoey in 2007.

Europe is their main common denominator.

Bayrou and Borloo were both members of the now defunct centrist Union for French Democracy (UDF), until 2007, when the UDF was replaced by Bayrou’s MoDem, while Borloo founded the UDI after participating in Nicolas Sarkozy’s right-wing government.