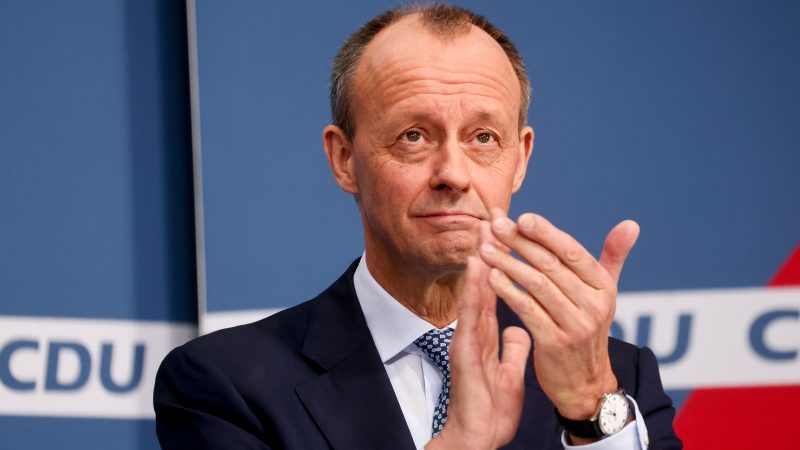 The CDU has a new party chairman: Friedrich Merz , who found success in his third bid for party leadership in as many years. [EPA-EFE/FILIP SINGER / POOL]

The German conservative CDU party has voted for the oldest “surviving” rival of former Chancellor Angela Merkel to take the position of party chairman: the neo-liberal veteran politician Friedrich Merz.

The Christian Democratic Union had let its members decide on who should lead the party at federal level in a bid to reenergise the party after 18 years of Merkel party leadership.

“The CDU has been in a state of emergency for the past three years” following the announcement that Merkel would retire, said designated party leader Friedrich Merz. These times should not be repeated, he added.

In the unique members’ vote, participation was higher than expected. “Almost a quarter of a million took part in the member survey, almost two thirds of all CDU members,” tweeted the CDU.

It was Merz’s third bid for party leadership, having lost to Annegret Kramp-Karrenbauer in 2018 and then to failed chancellor hopeful Armin Laschet in 2021.

In January, Merz now needs to receive the written approval of the party’s delegates at a convention to formally become leader. For his deputies Christina Stumpp and Mario Czaja to share the secretary-general role as has been announced, he will have to change the party charter as well.

Merz would become the 10th leader of the CDU. “I spoke a silent ‘wow’,” he told journalists in Berlin on 17 December after receiving the news of his win.

“Germany needs the CDU, which is why I wish you and us the best,” said Norbert Röttgen, who came second with 25% of the vote. It was imperative that the party now fought together for Germany, he added.

Congratulating Merz, former economy minister Peter Altmaier tweeted that the vote “is an appeal for unity of the party.”

Merz is an old hand in the CDU: he had been faction leader in the Bundestag the last time the party was in opposition during the reign of the social democrat Gerhard Schröder.

Having lost the battle for party leadership against Merkel in the early noughties, he retreated to the private sector and was on the board of the German stock exchange and multiple other private companies.

As the “traffic light” government led by Chancellor Olaf Scholz mulls mandatory vaccinations, observers expect that they will call for a so-called “vote of conscience” on the issue.

With large parts of the liberal FDP sceptical of mandatory vaccination and the far-right AfD party not expected to support a government initiative, CDU votes in the Bundestag may be needed to help out the government.

“We have a task, here in Berlin and here in the opposition,” said Merz. “The voters have given us a task.”