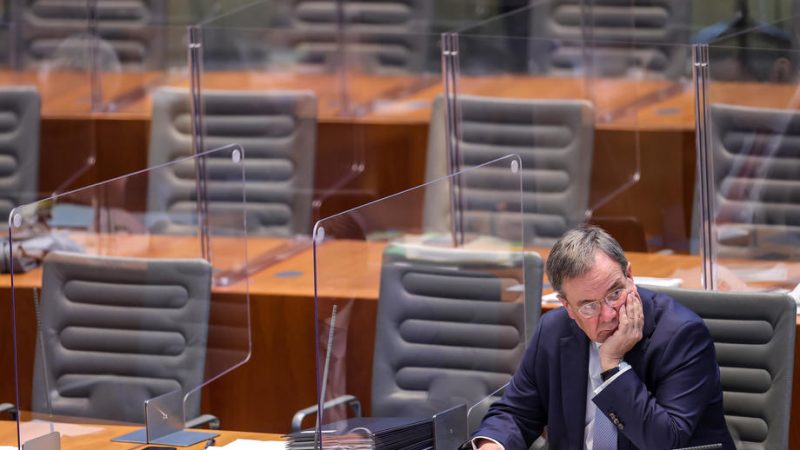 Forming a coalition government without the far-right party, collaboration with which remains strictly taboo for all parties, will not be easy. [EPA-EFE/FRIEDEMANN VOGEL]

Germany’s conservatives are bracing for what is likely to be a bruising result in Sunday’s regional election in the eastern state of Saxony Anhalt, with polls suggesting the far-right Alternative for Germany (AfD) is set to gain more than a fifth of the vote.

The latest poll for broadcaster ZDF projects the AfD receiving 23% of the vote in Saxony Anhalt in Sunday’s poll, which comes just over three months ahead of September’s nationwide election.

Regional support for German Chancellor Angela Merkel’s Christian Democrats (CDU) has rallied in recent days, putting the conservatives on 30%, up from a low of 25% at the end of May.

While it seems that the CDU will be returned the largest party in the state, such a strong showing for the AfD will likely provide a headache for party leader Armin Laschet, the conservative bloc’s candidate to replace Merkel as chancellor after September’s election, when she is stepping down after 16 years at the helm.

In Saxony Anhalt, forming a regional coalition government without the far-right party, collaboration with which remains strictly taboo for all parties, will not be easy.

A similar conundrum rocked the CDU following a regional election in the eastern state of Thuringia in 2020, resulting ultimately in the resignation of Merkel’s preferred successor, former CDU party leader Annegret Kramp-Karrenbauer.

Her downfall came after she was ultimately blamed for failing to prevent Thuringia’s CDU voting together with the AfD to elect Thomas Kemmerich of the liberal Free Democrats (FDP) as state governor, breaking the taboo over cooperation with the far-right and sparking outrage across Germany.

Laschet meanwhile, having secured the chancellor candidate role in April after a bruising contest with Markus Söder, head of the CDU’s Bavarian sister party, the CSU, is now looking on similarly shaky ground.

The CDU’s incumbent Saxony Anhalt state premier Reiner Haseloff, incidentally, backed Söder over Laschet to run as Merkel’s successor, with the Bavarian leader having since privately signalled he has not entirely given up on his chances to run for the top job.

Haseloff’s regional party CDU has had the far-right AfD nipping at their heels since 2016, when the party crashed into parliament for the first time with 24% of the vote.

Much is at stake in Saxony Anhalt, with the parties aiming to keep the AfD out of government. Recent polls show the AfD likely to be returned a strong second, with an outside chance of gaining the largest vote share – an outcome that would likely prove an explosive upset nationwide.

The CDU hopes to be able to continue its current regional coalition with the Social Democrats (SPD) and Greens, despite its turbulent course over the past four years.

Depending on the result, there may yet be dynamics that might make a coalition with the AfD tempting for the CDU, said Martin Machowecz, head of the Zeit office in Leipzig and lead editor of the Zeit im Osten magazine.

However, any talk of cooperation with the far-right remains highly controversial.

The regional poll comes just over three months ahead of nationwide election set for September 26, in which Merkel’s conservative bloc is battling to retain power in light of the nationwide rise of the buoyant Greens.