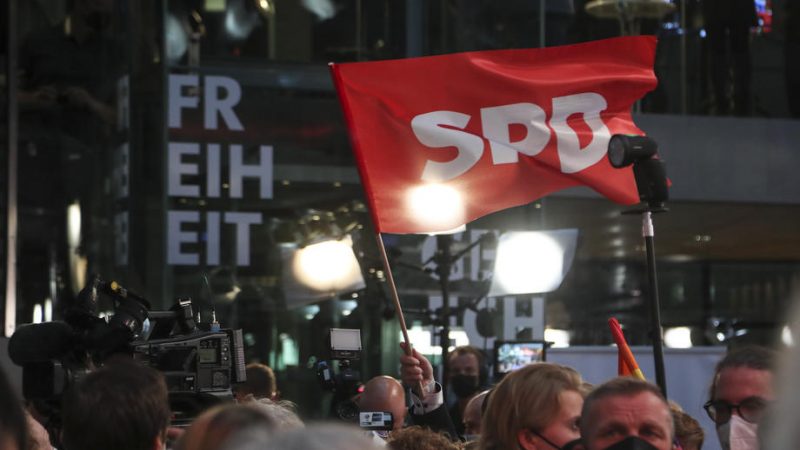 Germany’s Social Democrats clinched a narrow victory over Chancellor Angela Merkel’s Conservatives in Sunday’s federal election, but leaders of both parties quickly claimed their right to try to build a coalition government.

After initially appearing too close to call, the latest results showed the Social Democrats (SPD) pulling ahead with 25.7% ahead of the Conservative CDU/CSU on 24.1%, who scored their weakest result in a post-war federal election.

Early figures had indicated it could take a few hours for a clear picture to emerge of who will succeed Merkel.

Both the SPD and the CDU/CSU have said they would not want to renew their current Grand coalition and announced their claim to lead the next German government, which means they will reach out to the Greens and the FDP to explore their options with them.

“We will do everything in our power to form a federal government under the leadership of the CDU/CSU, because Germany now needs a coalition for the future that will modernise Germany,” CDU’s Armin Laschet said in his party’s headquarters as first exit polls trickled in.

SPD rival Olaf Scholz in turn said that one “can conclude from the result that we have a mandate to say we want to form the next government.”

However, there is no obvious next government at this stage.

Unlike in many other European countries, political parties do not need to be given a mandate from the head of state to attempt to build a coalition.

Instead, attention will now shift to informal discussions, followed by more formal coalition negotiations, which could take months, leaving Merkel in charge as a caretaker chancellor.

The first stage after election night is early talks, which may kick off as soon as Monday, with the winning party inviting potential partners. In 2017, this stage took nearly a month.

The second stage is exploratory talks (Sondierungsgespräche), which are traditionally more ‘exclusive’ and involve particular sets of parties exploring the potential for a governing coalition.

These negotiations can include early policy agreements. In 2017, the ‘Jamaica’-talks (CDU/CSU-Greens-FDP) went on for four weeks before breaking down in favour of the grand coalition.

The most serious phase starts when all parties involved are satisfied with the preliminary agreements reached in the exploratory talks and proper coalition negotiations can set about agreeing on a binding ‘coalition contract’.

Those talks could take a few months, depending on how much potential disagreement or need for detail on the policy goals there is.

The final step before the new chancellor can be elected by the Bundestag is if the coalition agreement is put to a vote by the party base, as might be the case with the Social Democrats.

After a domestic-focused election campaign, Berlin’s allies in Europe and beyond may have to wait for months before they can see whether the new German government is ready to engage on many ongoing issues, including foreign policy, to the extent they would like.