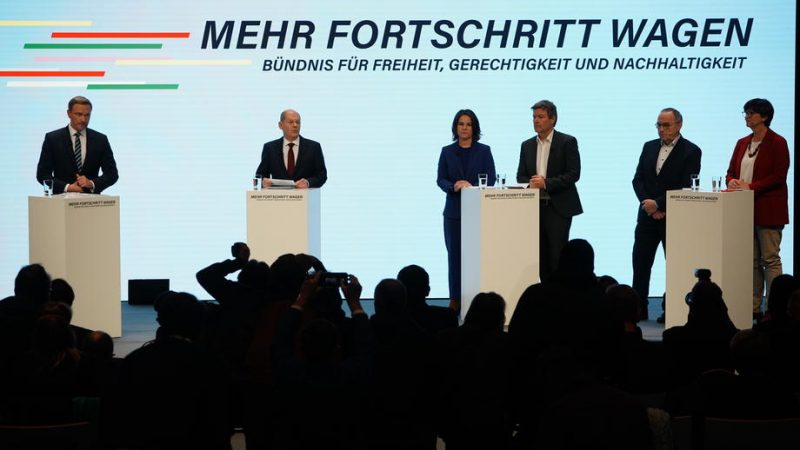 "We are not concerned with a policy of the lowest common denominator, but with a policy of great impact," emphasised Olaf Scholz, who is expected to be inaugurated as German Chancellor next week. [CLEMENS BILAN/EPA]

Germany’s Social Democrats (SPD), the Greens and the business-friendly liberal FDP have finalised their coalition agreement for a new government, two months after the general elections, with Olaf Scholz to succeed Angela Merkel as the new chancellor in December. EURACTIV Germany reports.

The current finance minister, Scholz will not only be Germany’s first social democrat chancellor in 16 years, but also lead the first three-party coalition in the country’s history.

“We are not interested in a policy of the lowest common denominator, but in a policy of great impact,” said Scholz, whose party narrowly won the general elections on 26 September and is expected to be inaugurated as chancellor in the first week of December.

The next federal government has its ambitions specifically set on climate protection, making the industry climate neutral, modernisation and digitalisation, said Scholz.

The Greens’ chancellor candidate, Annalena Baerbock, stressed that the coalition agreement would mean a “paradigm shift” for German politics, while Green party leader Robert Habeck said the country is now on the path “to reach the 1.5 degree target.”

The new “traffic light” coalition plans to massively boost investment – both private and public – in the next legislative period, particularly for climate protection and digitisation.

“We are confident that we can answer all the investment questions as well, as long as they are public investments,” he said.

Earlier today, the coalition announced how the ministries will be divided between the three parties. While personnel questions remain to be clarified in the coming weeks, some ministerial posts are already considered to have been decided.

The FDP’s Christian Lindner, for example, will take over the ministry of finance, while the ministry of economic, energy and climate protection will be filled by Habeck and the Ministry of Foreign Affairs by Baerbock for the Greens.

In addition to the chancellery, the SPD will receive six other ministerial posts, including the interior ministry and the ministry of defence.

The Greens will also appoint the next vice-chancellor and get the ministry of environment, of family, and of food and agriculture.

The FDP will receive a total of four ministries. In addition to the ministry of finance, education and research, justice and the ministry of transport and digital affairs, will also go to the FDP.

The prospect of Lindner taking over the powerful finance ministry has already been met with displeasure by some of the EU’s southern states.

As finance minister, Lindner could thwart efforts of the southern EU member states – such as Italy, Spain, but also France – which want to make the Stability and Growth Pact more flexible in order to obtain greater budgetary leeway.

While Lindner played down the accusations of being a “hawk” on fiscal policy issues he told the Süddeutsche Zeitung that “a federal government cannot side with those who want to undermine the Stability and Growth Pact.”

The coalition agreement states that the Stability and Economic Pact has proven its flexibility in its current form, a clear rejection of the Southern European initiative to make the fiscal pact even more flexible.

Climate change was the main topic of friction in the coalition talks, as the Greens had demanded that climate issues should be the main thread running through the entire coalition agreement.

Baerbock said that this has been achieved, as “we have created a coalition draft where this issue of climate neutrality runs through all areas of the coalition agreement”.

This comprehensive treatment of climate change issues was vital to the Greens in order to achieve the goal of keeping global warming below 1.5 degrees compared to the pre-industrial era, as enshrined in the Paris Climate Agreement.

In other areas, however, the Greens did not prevail.

For example, no expansion of climate protection targets was included in the coalition agreement.

“We have chosen a different path instead,” Habeck said.

Instead of setting ever higher goals and then falling short of the targets set, “concrete measures” will be identified in order to be able to achieve these goals, Habeck continued.

The party also backed down on the issue of phasing out coal. Instead of anchoring the coal phase-out by 2030, as envisaged by the Greens, it is merely mentioned that it should “ideally be brought forward to 2030”.

Nevertheless, some climate policy objectives made it into the agreement. By 2030, 80% of electricity consumption in Germany is to come from renewable energies and 15 million fully electric cars are to be on German roads.

The Greens were also unable to secure a veto right for the ministry for economic affairs and climate protection, which would have allowed the Green-led ministry to block legislative proposals if they were not compatible with the climate goals.

However, the Greens have also scored a coup at another level. The right to propose the next German EU Commissioner after the next European elections in 2024 is reserved for the Greens, should the post of commission president not stay with Germany.