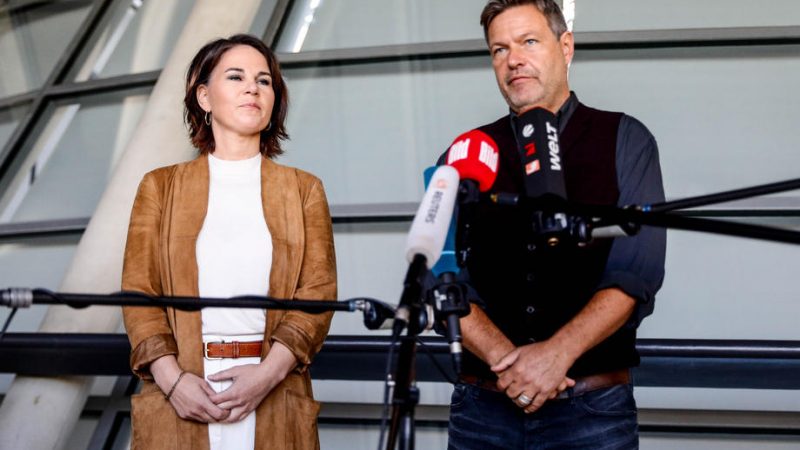 Germany’s Greens and the liberal FDP, two kingmakers after the inconclusive federal election, have announced they want to launch talks about a potential coalition with the Social Democrat SPD, rather than with outgoing Chancellor Angela Merkel’s CDU/CSU. The first discussions are planned for Thursday (7 October).

In a statement on Wednesday morning, the Greens announced that they had proposed to the business-friendly FDP to start formal exploratory talks for a three-way alliance with the Social Democrats, who narrowly took the top spot in the 26 September federal election.

After a series of preliminary bilateral discussions, the talks would be the first ones to involve three parties.

“Our wish is that this can happen swiftly,” the Greens’ party co-leader, Annalena Baerbock, told reporters after the party had retreated to discuss further strategies internally.

Shortly after, FDP leader Christian Lindner announced that his party had accepted the Greens’ offer, adding that he had already coordinated with SPD’s lead candidate Olaf Scholz to schedule first talks for the next morning.

Following the elections, the liberals and the Greens had been the first parties to meet up and coordinate their strategies. While the parties trailed behind the SPD and the CDU/CSU in terms of vote shares, both hold clout as “kingmakers” for the bigger factions to reach a majority.

With their decision, the Greens and the FDP give precedence to Scholz to lead a so-called “traffic-light coalition” as chancellor, rather than a “Jamaica coalition” under the leadership of CDU/CSU and their nominee, Armin Laschet.

Both parties, however, stressed that an alliance with the conservatives was not off the table at this point. “Our course will be based on where we can achieve the biggest amount of liberal policy,” Lindner said, adding that a “Jamaica” coalition remained “a viable option in terms of substance”.

“However, the Union parties’ [CDU/CSU] will to govern and their unity are debated in the public discourse,” he noted.

Over the weekend, parties had come together in different bilateral formations for confidential discussions on potential coalition options. However, members of the conservatives’ negotiation team had reportedly leaked information to the media on several occasions, prompting irritation on the part of their conversation partners.

Moreover, several high-ranking party members have publicly voiced doubts about whether the Union should aim to lead the government despite only having come in second place in the election, with a historically low vote share of 24 %.

The Greens, meanwhile, openly acknowledged that a “traffic light” coalition was their preferred option. The party’s co-leader, Robert Habeck, said the talks held over the weekend had shown that this alliance held the biggest potential for common ground, especially regarding social policy.

Habeck stressed, however, that an SPD-led coalition was “by no means a done deal”, as many issues were yet to be thoroughly discussed.

The fact that the Greens are giving precedence to “traffic light” talks was not a “total rejection” for the CDU/CSU, he explained, as the conservatives had shown themselves ready to compromise, including on climate change.

According to Habeck, differences remained between the Greens and the conservatives on issues like social policy and European integration.