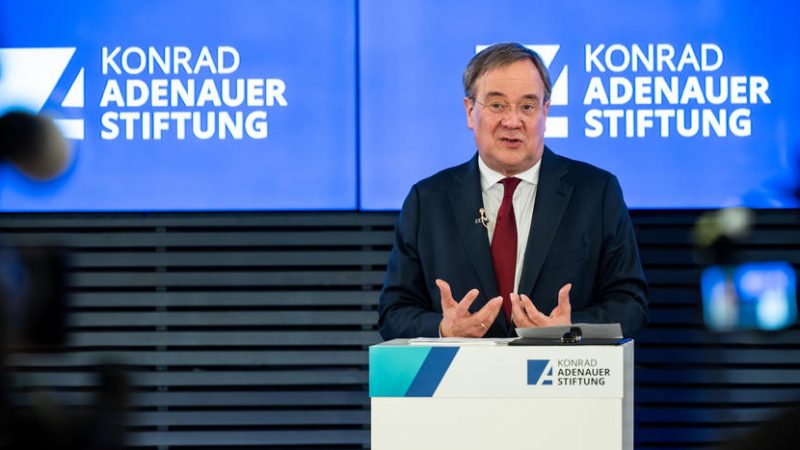 The leader of Germany’s Christian Democrats (CDU) Armin Laschet, who hopes to succeed Chancellor Angela Merkel, is largely expected to keep his predecessor’s diplomatic line, with little nuance on foreign and security policy.

Laschet, in his first landmark speech on foreign policy on Wednesday (19 May), largely signalled he would maintain Merkel’s line on criticising China and Russia for human rights and other abuses without sacrificing economic interests, speaking at an event at the Konrad Adenauer Stiftung, a political foundation associated with his CDU party.

He was confirmed as the Union’s chancellor candidate in April after conservative CSU rival Markus Söder conceded. This year’s German federal election is expected to be held on 26 September 2021. If CDU obtains a good result and a coalition around this force is formed, he could indeed be Merkel’s successor as chancellor, but recent polls see the Greens currently in the lead.

In his speech, Laschet described China as a “partner, competitor and rival”, highlighting both “economic relations that are of great relevance to us” and differences when it comes to “human and societal questions”.

Unsurprisingly, however, the CDU chancellor hopeful said he’s stick to Merkel’s line on the controversial EU-China investment deal (CAI), whose ratification efforts was recently suspended by the European Commission.

As chancellor, he would vote for the ratification, he said.

Laschet, considered by some critics to be a Russlandversteher called for a pragmatic approach to Russia, which he said could be seen as a “partner” for the EU in certain contexts, but said he “wouldn’t change a thing” on the current government line towards Moscow.

“However, where international rules are violated, Russia must also be shown where the line is,” Laschet added.

Asked about Russia’s controversial Nord Stream 2 pipeline to Europe, Laschet said Merkel’s government “is following the right course”, reiterating his position that “this is a commercial project” and Germany would need gas to bridge its energy transition.

Greens top candidate Annalena Baerbock, the main election contender to Laschet according to opinion polls, had already said she wants to see the pipeline scrapped, saying it undermines sanctions against Russia and poses an environmental threat.

“If she thinks she wants to protect Ukraine strategically, I would agree with her,” Laschet said when asked what this would mean for a potential Green-Black coalition after the elections, but did not say if he would be ready to abandon it.

At the same time, he said now was the time to renew the transatlantic relationship.

“And we need a revival with new themes, with a new dynamic of the transatlantic relationship. And this will revolve around trade issues – a large free trade area as an ambition, but also a common climate foreign policy,” he added. 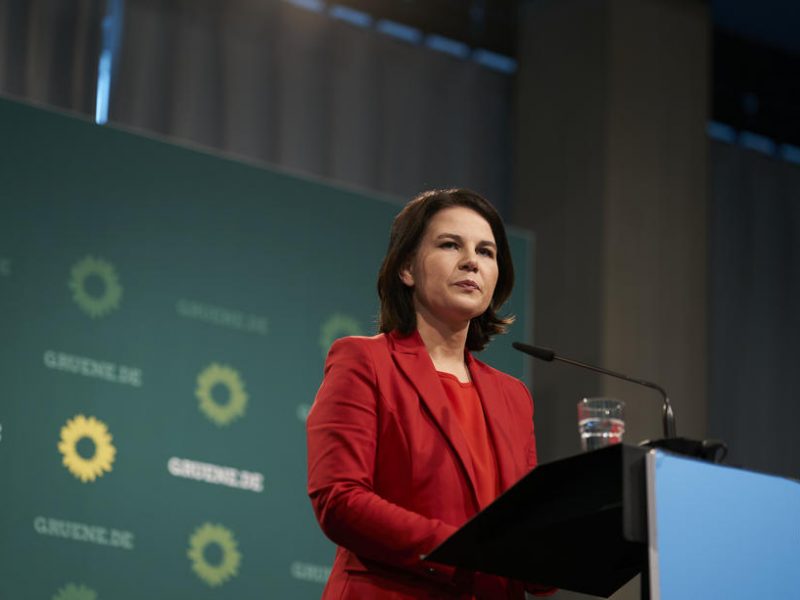 The German Greens’ candidate for chancellor Annalena Baerbock on Thursday (6 May) said her country must be more active on foreign policy and “take more responsibility for its own security”, in a sign the party is shifting from its pacifist stance towards the centre.

So far, both Baerbock and Laschet have voiced their alignment with the US and their commitment to Europe and NATO. But while Laschet endorsed Germany’s commitment to working toward spending 2% GDP on defence, Baerbock had doubted that NATO’s spending goal is “state of the art.”

In a swipe towards the Green contender, Laschet said such a commitment is “to be expected from everyone who strives for the highest offices in Germany”.

The only new idea Laschet committed to in his speech was the push for a German national security council, a step he said he would make a priority in his first year in office. While the idea is not new, it remains controversial in Germany as the country’s decision-making process on security and defence matters, compared to other countries that have such bodies, is largely decentralised.

“In decisive moments, our country needs the expertise of the entire government including intelligence services, and they all have to sit at one table,” Laschet said.

Laschet also expects more strategic thinking and action from the EU, saying “Europe must become capable of global politics”, for which a first step would be a move to qualified majority voting on foreign policy.

But while he remained ambiguous about how he would see an EU foreign and security policy development, he insisted on the need of “a new relationship with Britain too, including on security issues,” and instead largely focused on renewal of Franco-German relations on the matter.

According to him, this group could build on the cooperation between Germany and France agreed in the Aachen Treaty and for example, deal with arms and military policy issues.