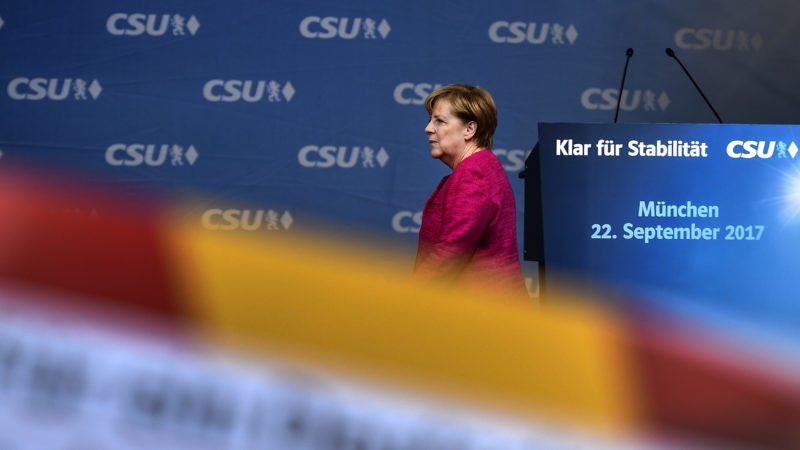 Voters head to the polls on Sunday (24 September) for a race where the winner is almost pre-ordained. This may drive a protest vote that could see the far-right AfD become the official opposition.

For months, it has been clear that barring any unusual development, Angela Merkel will remain chancellor of Germany following Sunday’s federal election. What will be determined by voters then is who will be with her in government, and who will be her chief opponent.

It is the latter that has many Germans worried.

After a lackluster campaign run by Martin Schulz, the former president of the European Parliament, it now looks likely that his center-left Social Democrat party (SPD) will continue its ‘grand coalition’ with Merkel’s center-right Christian Democratic Union (CDU). This means that the most interesting result to watch will be which party comes in third place.

It was initially hoped that Schulz could provide a credible alternative to Merkel, even though his party has been in coalition government with her for four years. He was away in Brussels, and so he didn’t have ownership of government decisions. He enjoyed a surge in popularity after announcing his bid to take on Merkel in January, matching her in the polls.

But as the campaign rolled on he too often was in agreement with Merkel. Voters couldn’t see a significant difference between them, and this was highlighted during a one-on-one TV debate on 3 September. Merkel shrewdly nodded her agreement with Schultz for three hours, knowing it would kill his chances of becoming chancellor.

The three hour love-in left voters feeling exasperated. Polling for the SPD plummeted, now falling between 20 and 22 percent versus 34 and 37 percent for the CDU. If the polls are correct, it would be the worst electoral performance for the Social Democrats in their history.

Far right returns to the Bundestag

This leaves the four smaller parties competing for third place. The Liberals (FDP), Merkel’s former coalition partners in the 2009-13 term, are polling at around seven percent. They have been in the political wilderness since 2013 when they failed to reach the 5 percent threshold to enter parliament. The Green party is also at around seven percent.

The far-left Die Linke party, the successor to the East German communists, is polling at around 10 percent. The far-right Alternative for Germany (AfD) party is polling at 12 percent. It has become the year of the small parties, a far cry from 2013 when two of these parties didn’t meet the five percent hurdle to enter parliament, and the other two (the Greens and Die Linke) had only 17 percent between them.

It is the AfD polling that has many worried. It would be an astonishing result for a party that was founded just four years ago, as an anti-euro party in reaction to the eurozone debt crisis. It has since morphed into an anti-immigration party.

At the start of this year, the AfD was mentioned alongside France’s Front National and the Netherlands’ Freedom Party as part of a populist surge that could overtake continental Europe following the victories for Donald Trump and Brexit in the English-speaking world.

But following the defeat of the far-right in France and the Netherlands this year, those fears waned. The AfD fell to around seven percent in the polls by the summer. Germans still knew that the AfD would clear the hurdle and take the first far-right seats in the Bundestag since World War Two. But it wouldn’t be anywhere near the number of seats predicted at the start of the year.

It may have been too early to relax. In recent weeks, perhaps because of frustrations over the Schulz-Merkel TV debate, the AfD has been picking up in the polls. It is clear they have momentum going in to today’s vote, and that isn’t even taking into account the possible ‘quiet AfD votes’ – people who are too embarrassed to admit to pollsters that they will vote for the far-right.

The CDU will not gain enough seats to obtain an overall majority in the parliament, so they must form a coalition with one or two other parties. There are three likely scenarios: another grand coalition with the SPD, a partnership with the Liberals, or a coalition of the CDU, Liberals and Greens. The latter possibility is called the ‘Jamaica coalition’ because the political colors match the Jamaican flag.

In the latter two scenarios, the Social Democrats would be the largest opposition party in the parliament, which gives it an official status. They would chair some committees such as the budget committee, which by custom is chaired by the largest opposition party. They would also have first priority to speak after the government on the floor of the parliament.

But if the CDU and SPD decide to continue their coalition, and if voting today matches the latest polls, it would mean the AfD becomes the official opposition. The prospect of the AfD controlling the budget committee is for many a nightmare, especially given that it was founded as an anti-euro party.

Having official opposition status would give the AfD a pulpit far higher than a 12 percent threshold might suggest.

That being said, the situation isn’t quite as dramatic as it may appear. The far-left Die Linke party has had official opposition status for the past four years after coming in third in the 2013 election. That party has been deemed similarly untouchable by Germany’s mainstream parties.

But for Germany, the symbolism of having a far-right opposition may be far more psychologically upsetting than a far-left one. The fact that the AfD is so new and growing is also a fear. Die Linke is an old, established party that has long had a floor of around eight percent support.

These will be the four parties to watch when official results come in at 6pm on Sunday. Polling has indicated that nearly a quarter of voters are still undecided. With the margin between the four parties so close, it’s anyone’s guess where they will land.

If voting matches the polls, Angela Merkel will have a real problem on her hands. Franz Josef Strauss, former leader of the CSU, the Bavarian sister party to the CDU, once warned the bloc never to allow a party to form to the right of the CDU/CSU bloc. That reality is now here, and the party may become Germany’s official opposition.