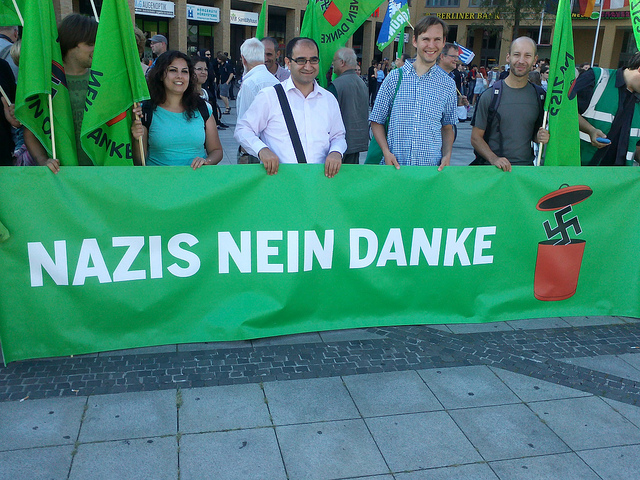 Germany’s highest court will  hear a landmark request on Tuesday (1 March) to ban a neo-Nazi fringe party, more than a decade after a first attempt failed.

The case before the Federal Constitutional Court will argue that the far-right and anti-immigrant National Democratic Party (NPD) spells a threat to the country’s democratic order.

Chancellor Angela Merkel’s government supports the case, although it has not formally joined the high-stakes legal gamble launched by the upper house of parliament that represents Germany’s 16 states.

Critics charge the proceedings will give the NPD, a party with only about 5,200 members, a national stage and that a ban could turn its members into martyrs for their racist cause.

The party, founded in 1964 as a successor to the neo-fascist German Reich Party, scored just 1.3 percent in 2013 national elections and has never crossed the five percent hurdle for entry into the national parliament.

However, it is represented in the state assembly of Mecklenburg-Western Pomerania in the former Communist East and in many town councils in the region. It also has one seat in the European Parliament, held by former party chief Udo Voigt who once, in a newspaper interview, labelled Adolf Hitler “a great statesman”.

The case comes at a time when a record influx of refugees and migrants has polarised German society, and as the number of racist hate crimes has spiked.

While NPD activists have sought to exploit rising xenophobia, they have failed to make gains at the ballot box. The more moderate right-wing populist Alternative for Germany (AfD) has meanwhile entered five state parliaments and is polling nationally around 10 percent.

Germany’s middle-class is shifting rightwards, according to a study by the Friedrich-Ebert Foundation, finding Eurosceptic AfD’s followers in particular supporting right-wing extremist and chauvinist ways of thinking. EURACTIV Germany reports.

NPD chief Franz Frank last week sent letters to police and army troops, reminding them that in the former East Germany security forces resisted against the state and stood by the people — a letter seen by some as urging a coup d’etat.

Five state premiers are expected in the courtroom, along with interior ministers and the chiefs of federal and state security services and police forces.

The legal bar to outlaw any political party in Germany is high. Only two parties have been banned since World War II — an heir of the Nazi party, the SPR, in 1952 and the German Communist Party four years later. To make their case, the states must convince judges that the NPD is unconstitutional, represents an active threat to the democratic order and holds an “aggressive and combative attitude”.

They will also seek to prove the NPD is creating a “climate of fear” in Germany and “shares essential characteristics” with the Nazis.

They will likely point to the fact that a former NPD senior member, Ralf Wohlleben, is on trial for supporting the far-right militant group National Socialist Underground which murdered 10 people, most of Turkish origin, between 2000 and 2006.

A previous attempt to ban the NPD failed in 2003 because the presence of undercover state informants within party ranks was seen as muddying the evidence.

Police and the domestic intelligence service say they have now “deactivated” all undercover sources within the NPD.

But the party is likely to base its defence on claims that informants and “agents provocateur” are still hiding within its ranks, and that the state has spied on their legal strategy, its lawyer Peter Richter has suggested to German media.

Initial hearings have been scheduled for March 1, 2 and 3 in the court in the southwestern city of Karlsruhe.

Many have criticised the case, including Timo Reinfrank, of the anti-racist Amadeu Antonio Foundation. “Right now, there are so many other things to do rather than focus on a ban of the NPD, which is only part of the problem,” he told AFP. “The urgent  priority is to prevent right-wing attacks against refugee shelters.”

Justice Minister Heiko Maas also cautioned that “even if the NPD is banned, that unfortunately doesn’t mean there is no more right-wing extremism in Germany”.