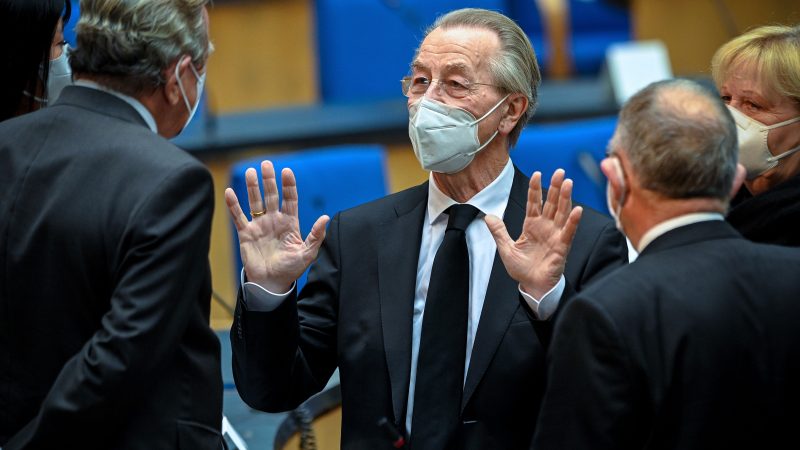 While environmentalists are concerned that seniors are blocking climate action and young adults clamor for the right to vote, Franz Müntefering (pictured) says seniors are willing to do their part. EPA-EFE/SASCHA STEINBACH / / POOL

Germany heads to the polls on Sunday (26 September) with a majority of voters aged above 50, while many teenagers under the legal voting age of 18 feel disgruntled for not being allowed to vote in an election they consider pivotal.

About 60% of German voters are aged 50 and above, which influences the priorities German political parties.

Outgoing chancellor Angela Merkel noted during a 22 July press conference in Berlin that the amount of older voters had impacted her policies during her 16-year tenure.

59% of voters above the age of 65 were against keeping younger generations’ interest in climate protection in mind while voting, according to a survey by an environmental NGO, NABU.

“Creating a viable – sustainable – world is the greatest challenge of this decade or even this century,” said Franz Müntefering, the 81-year-old chief of Germany’s senior citizen association, BAGSO.

“All generations must do their part,” he argued during an event in August.

It is a view that is scarcely reflected in the recorded voting behaviour of senior citizens. A 2021 study found that older voters had consistently differentiated themselves from younger voters in the 2017 German federal elections as well as in the 2019 European Parliament elections.

In 2017, voters past the age of 60 had a significantly lower propensity to vote for the Greens, while the share of those voting for the incumbent conservatives and social democrats grew in proportion with age.

In the 2019 EU elections, voters aged 18-24 cast their ballot for the Greens more than three times as much as for the conservative CDU/CSU.

As a whole, the report’s figures showed that age positively correlated with a propensity to vote conservative, while the 70 and up age-group was half as likely to vote for the Greens as the nationwide average in the 2017 elections.

Müntefering’s BASGO, which holds a lot of sway by virtue of the sheer number of senior citizens it represents, has signalled what it expects from politicians in a position paper.

Key priorities that stood out were a constitutional right not to be discriminated against based on age, more concerted steps to combat poverty in old age by the parties and further political support for long-term care insurance.

In Germany, the voting age is 18, which continues to disgruntle young adults. On 17 September, they held a mock election under the banned of the u18 movement.

The mock election garnered the votes of more than 220,000 young adults, and showed that Greens far outperform the 15-17% of votes the party is expected to receive on 26 September.

The youth mock election gave the Greens 21% of the vote, and the high degree of interest raised by the faux election has strengthened the case for lowering the voting age, the organisers say.

“U18 is also a clear sign that the voting age limits in Germany should be lowered,” said Anne Lütkes, vice president of the German Children’s Fund.