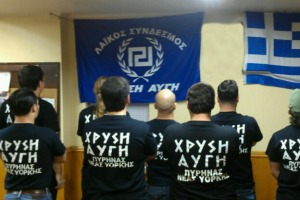 The handling of the case against Greek far-right party the Golden Dawn has divided the coalition government and triggered a war of words between the centre-right New Democracy and the left-wing opposition party Syriza. EURACTIV Greece reports.

The recent assassination of anti-fascist rap artist Pavlos Fyssas by a Golden Dawn supporter has opened up a political Pandora’s Box in Greece, brining to light serious criminal activities of the far-right party Golden Dawn after an investigation by the Greek justice system.

The arrest last Saturday (28 September) of party leader Nikolaos Mihaloliakos, spokesman Ilias Kasidiaris, four other lawmakers and 13 party members, was the biggest mass detention of lawmakers since the end of Greece's military dictatorship in 1974.

According to prosecutors, Michaloliakos was sent to jail accompanied by the deputy commander, Christos Pappas, after three other Golden Dawn MPs were freed on bail on Wednesday (2 October) with serious restrictions, such as appearing to the police once per month as well as being prohibited to leave the country.

Golden Dawn claims that the mass arrest is a persecution of political nature caused by its rise in the polls, ahead of the municipal elections due to take place in May 2014.

“The custody of our leader is totally unfair, unconstitutional and is dictated by foreign power centers”, Golden Dawn said in a statement.

“Our political party will run in the elections," Pappas said.

According to the government spokesperson Simos Kedikoglou the decision not to detain the three deputies of Golden Dawn “surprised” Greek Prime Minister Antonis Samaras, who at that time was paying a visit in the United States.

“Of course I was surprised”, he said.

“The extremists of Golden Dawn are answerable to justice and some of them are already in custody, this is something that has never happened before,” Samaras said after a meeting in Washington with US Vice President Joe Biden.

Syriza called for a plenary session of the Greek parliament to discuss the Golden Dawn case, claiming that “the defense of democracy requires the isolation of those who undermine it”.

Opposition Syriza blamed the communication of the government, saying that it tried to justify its long inaction while at the same time it “invested” in the TV show of the arrests.

The leader of Syriza, Alexis Tsipras, said that the Greek PM was trying to polarize the political climate in order to present himself as the “guarantor of Democracy” in the debt-ridden country.

Close advisors of the Greek PM are supporters of the “Two Poles Theory”, attempting to equate the criminal activity of the neo-Nazi Golden Dawn with the main opposition of Syriza.

“The case of Golden Dawn is primarily political. The adoption of the Theory of the Two Poles by the PM himself undermines the efforts to combat this fascist phenomenon.

The government, which was aware of Golden Dawn’s criminal activities but was turning a blind eye and at the same time was targeting the Left and the social struggle, paved the way for the escalation of fascist violence”, said Syriza in a statement.

Speaking to Euronews, Tsipras attacked the Greek Minister for Public Order and Civil Protection, Nikos Dendias, saying that “he didn’t do his duty by handing over the (32) charges he already had [against Golden Dawn] to the public prosecutor.”

“Should he wait until they become 33 with the 33rd being this assassination?” Tsipras wondered, referring to the assassination of the leftist rapper.

Government hits back at Syriza

Government spokesman Kedikoglou fueled further the dispute by stating that with his rhetoric, Tsipras had become the “best advocate” of Golden Dawn. “Congratulations,” he exclaimed.

In the meantime, sources from the Left claim that the Greek PM and the center right New Democracy are “fishing” votes from Golden Dawn.

Roupakiotis indicated that he was left with the clear impression that some in New Democracy froze the anti-racism bill as they believed that “Golden Dawn should not be polarized” and wanted “to have an open corridor for the supporters to come back”.

“The temporary release of the three Golden Dawn MPs does not mean that they are not charged for criminal activities. The Greek justice has its own logic and I think that we should support its efforts regarding this case. We fully trust the Greek justice.”

In the meantime, the Greek Communist Party said in a statement:

“The latest developments regarding the character and the role of Golden Dawn as a Nazi organization reveal the extreme voice of the capital and the system, which are sworn enemies of the Greek people.”