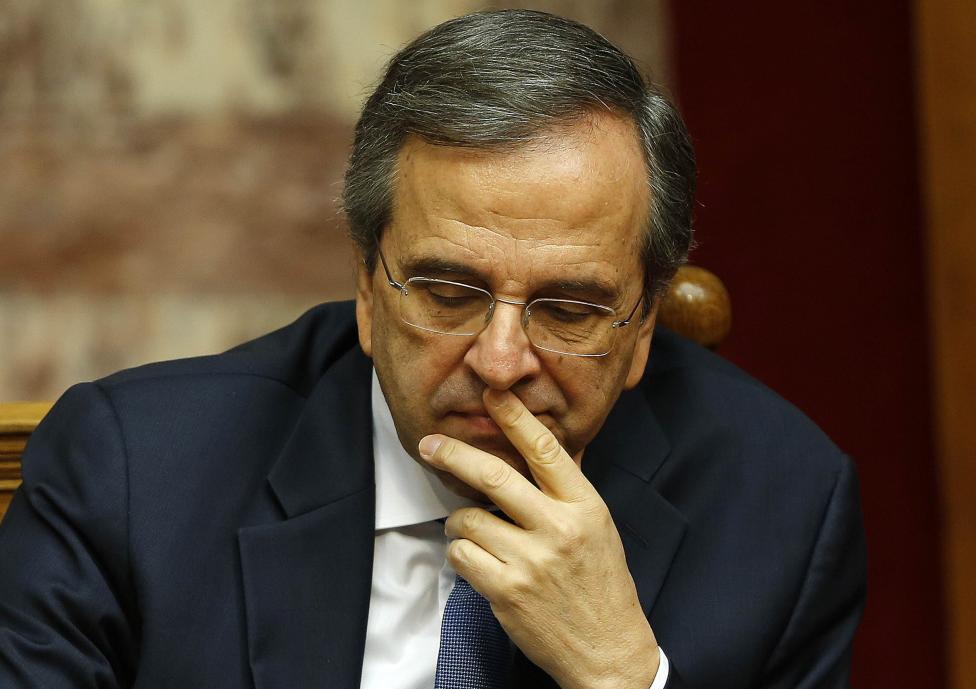 Greek Prime Minister Antonis Samaras announced plans for an early general election next month after parliament rejected his candidate for president on Monday, throwing the country’s international bailout into doubt.

After three rounds of voting, the only candidate in the race, former European Commissioner Stavros Dimas, fell short of the 180 votes needed to become president, triggering a procedure leading to the dissolution of parliament.

Samaras immediately announced that he would meet outgoing President Karolos Papoulias on Tuesday to propose holding parliamentary elections on Jan. 25 and called on Greek voters to ensure stability was preserved.

Opinion polls point to a victory by the radical leftist Syriza party, which wants to wipe out a big part of Greece’s debt, and cancel the terms of a bailout from the European Union and International Monetary Fund that Greece still needs to pay its bills.

“With the will of our people, in a few days bailouts tied to austerity will be a thing of the past,” Syriza leader Alexis Tsipras said after the vote. “The future has already begun.”

Syriza has held a steady lead in opinion polls for months, although its advantage over Samaras’ conservative New Democracy party has narrowed in recent weeks. Weakness among potential coalition partners of both could mean that whichever party wins in January will struggle to form a government and may not survive long.

On the brink of a new crisis?

“The outcome of the final vote extends the political uncertainty for at least one month,” said Theodore Krintas, head of wealth management at Attica Bank in Athens. “One cannot know if the result of early elections will be a viable government.”

“No significant economic decisions can be made before there is a new government and this is already reflected in the markets today,” he said.

Samaras, who had been pushing for an early end to the deeply unpopular bailout program, brought forward the presidential vote earlier this month, gambling that victory would ease the growing political pressure on his ruling coalition.

A negotiating team from the “troika” of creditors from the European Commission, IMF and European Central Bank, had been due to resume talks in Athens next month to wind up the 240 billion euro ($290 billion) bailout and agree an interim, post-bailout program.

In a bid to reassure international partners, Tsipras has sounded a more moderate tone recently, promising to keep Greece in the euro and negotiate an end to the bailout agreement rather than scrap it unilaterally.

But he has stuck to his promise to reverse many of the tough austerity measures imposed during the crisis, reversing cuts to the minimum wage, freezing state layoffs and halting the sale of state assets.