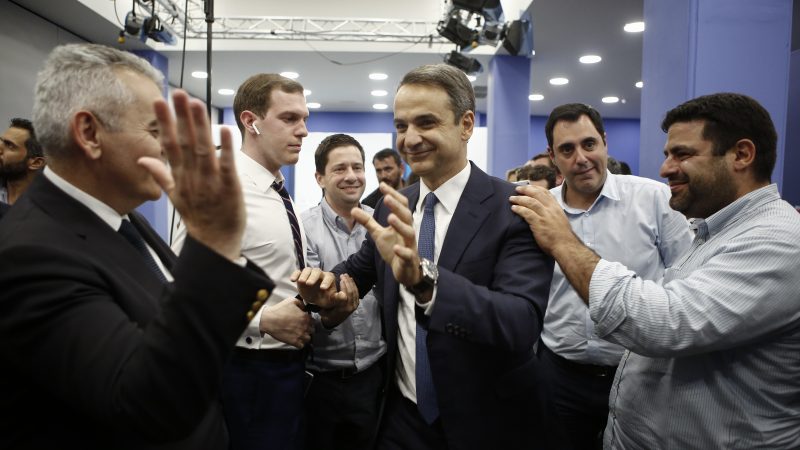 Greek main opposition party New Democracy Kiriakos Mitsotakis shakes hands with supporters after the announsment of the first resulds of the triple elections, for Local Government, Regional Government and the European Parliament, in Athens, Greece, 26 May 2019. [Yannis Kolesidis/EPA/EFE]

But Greece’s top family dynasty has its sights on an even bigger prize, with Dora’s brother Kyriakos Mitsotakis in pole position to become prime minister in early elections expected in July.

Leftist Prime Minister Alexis Tsipras will next month call for early elections after his Syriza party was beaten by over nine points by Mitsotakis’ conservative New Democracy party in Sunday’s European parliament ballot.

“Citizens have demanded political change. This change…has already begun,” Mitsotakis, who has led the party since 2016, said in a victory speech.

Mitsotakis’ father and Bakoyannis’ grandfather Constantine Mitsotakis, the family patriarch who died in 2017 at the age of 98, held a succession of ministerial posts from the 1950s onwards and was prime minister in a New Democracy administration from 1990 to 1993.

In addition to being Athens mayor, Constantine Mitsotakis’ daughter Dora also served as minister of culture in his administration and later as foreign minister.

Her brother Kyriakos on Monday pledged “tax cuts, lots of good jobs, safety for all, and a different style of governing.”

“We will remain modest…we will not fall to the temptation of making electoral promises,” the 51-year-old economist aiming to unseat Tsipras said.

Originally scheduled in autumn, early national elections are likely to be held on 7 July according to news reports.

With a second potential prime minister and Athens mayor, the Crete-based Mitsotakis family has now taken the reins from Greece’s former leading political clan of Papandreou, which elected three prime ministers between 1944 and 2009.

As Mitsotakis led a near-sweep on Sunday in regional elections with New Democracy securing outright, or in a commanding position of the bulk of Greece’s 13 regions, his nephew charged into the second round of local elections on 2 June with a score of over 42%, more than 25 points clear of his nearest rivals.

In his first comments on Sunday, 41-year-old Costas Bakoyannis said he felt “shock and awe” at an election result “that exceeds all expectations.”

“We want all Athenians to feel part of the change we want to bring to the city,” he said.

Both Bakoyannis and Mitsotakis are big on public safety, seeking to capitalise on Tsipras’ perceived inaction against anarchist vandalism and lawlessness.

After vandals smeared paint on one of his electoral kiosks ahead of the first electoral round on 26 May, Bakoyannis let loose.

“They should cross themselves, if they believe in God, that I don’t become mayor,” he said.

Costas was just 11 years old when his father Pavlos Bakoyannis, a conservative lawmaker with New Democracy, was gunned down in 1989 by the far-left November 17 organisation.

Describing himself as a workaholic and educated as a political scientist at Brown University and Harvard, Bakoyannis was first elected mayor of the small mountainous town of Karpenissi in 2010 at the age of 33.

As mayor of Karpenissi he is credited with bringing additional tourism to the area.

Four years later, he was elected to the post of regional governor for central Greece.

Mitsotakis, who studied at Harvard and Stanford, is a married father of three.