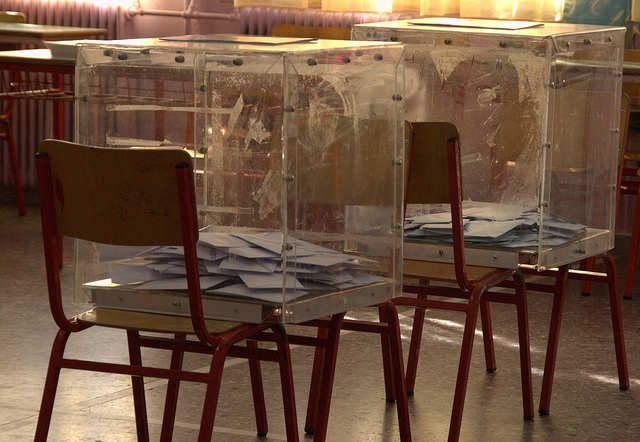 Tsipras: Voting in 17 is a motivation for young people to be politicised. [Eleni Papaioannou /]

The Greek government’s “progressive” decision to lower the voting age to 17 should be considered as a role model for other EU countries, the European Youth Forum has told euractiv.com.

The Greek parliament last month (21 July) approved by a simple majority government’s proposed changes to the electoral system, with 179 votes in favor, 86 against, and 16 lawmakers abstaining.

Among other provisions, Greek lawmakers decided to lower the voting age, allowing 17-year-olds to vote in the next general elections.

According to the new electoral law, about 130,000 17-year-olds are expected to participate in the next national election.

For the Syriza-led government, this move will enforce youth participation. But the opposition parties do not share such a view and believe that Greek premier Alexis Tsipras is trying to “cheat” young people.

But the coalition government rejected the opposition’s proposal to grant voting rights for Greeks living abroad.

Stavros Theodorakis, leader of the centrist Potami, said: “You are deleting from the electoral lists all these who moved and lived abroad in recent years because you are obviously afraid that those who migrated for a better life will not vote for a party within which there is a widespread view that career is cholera.”

Referring to the recent election in Austria, Mitsotakis stressed that the votes of expatriates prevented the election of an extreme right president. “In Greece, Tsipras says no to Greeks living abroad.”

Johanna Nyman, president for the European Youth Forum, which represents 99 youth organisations in Europe, hailed the decision saying that youth rights are empowered.

“The European Youth Forum welcomes this progressive decision as a step forward for young people’s rights to participate in democracy and we call on other European countries to do the same and indeed to go beyond this to lower the voting age to 16,” she said.

Nyman said that by giving young people their democratic right to make their voice heard at an earlier age “Greece is recognising that engaging young people in politics will empower 17-year-olds and is a step towards young peoples’ having access to their rights”.

The leftist Syriza party claims that it represents something “new” in Greek politics. Syriza lawmakers noted that the political agenda is disproportionally focused on issues such as pension cuts, and youth issues like unemployment were out in the corner.

“Voting in 17 is a motivation for young people to be politicised, take a step forward and take their life in their hands,” Tsipras said.

“Since the prime minister wants to give additional rights to minors, is he ready to give them the obligations of an adult?” Mitsotakis asked.

The right-wing politician also noted that everywhere in the world, except North Korea, people voted at 18 and above.

“In a few countries, of which most are dictatorships, people vote at 17,” he said, triggering strong reaction from Syriza.

“[Mitsotakis] is trying to discredit the young generation, considering it unable to decide on its future,” Syriza said in a communique, adding that “dictatorship” countries like Austria and Germany have already lowered the voting age.

In Austria, voting rights in general elections have those who have completed 16 years, while the same applies to national and local elections in some Germany’s states.

“Shouldn’t election campaigns take place in schools as is the case for working places?” Varvitsiotis said, adding that the government had not realised the consequences of such a move.