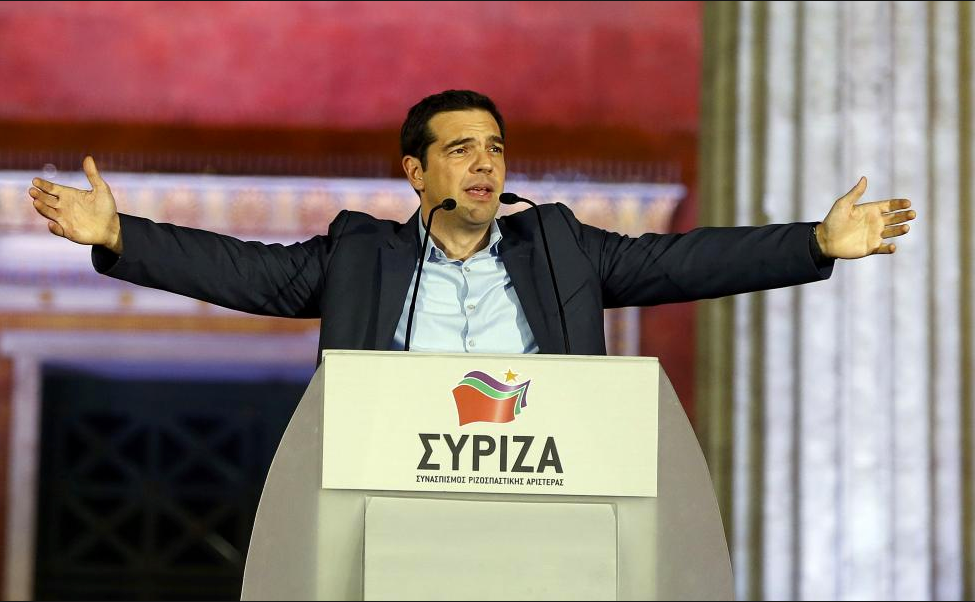 Syriza marked a stunning victory in yesterday’s (25 January) Greek snap elections, but did not ensure an absolute majority. Its leader, Alexis Tsipras, said the “vicious cycle of austerity” is over, triggering mixed reactions in the EU. EURACTIV Greece reports.

Ahead of today’s (26 January) crucial meeting of Eurogroup, Tsipras stated that the Greek public debt is not viable, and asked for its restructuring, which amounts to 177% of GDP. During his election campaign, he also committed to ending austerity-driven policies which led Greece to a “humanitarian crisis”.

With the 90% of the votes counted, leftist Syriza won 36.3% of the vote, followed by its main rival centre-right New Democracy with 27.8% and the far-right Golden Dawn with 6.3%. The newly established centrist Potami (“The River”) came in fourth, with 6% of the vote, the Communist Party 5.5% and the right –wing Independent Greeks 4.7% [ECR].

The “battle” between the Socialist parties that did not run in a united front in the elections, saw traditional S&D partner Pan-Hellenic Socialist Movement getting into the new parliament with 4.7% and the Movement of Democratic Socialists of former PM Giorgos Papandreou, not managing to reach the 3% threshold.

>> Read: Greece gives the EU a chance to rediscover its social responsibility

According to the results, Syriza gets 149 of the 300-seat parliament, and needs just two votes to form a coalition government. Syriza has made it clear that it will not cooperate with austerity-related parties, something that opens the way for cooperation with anti-austerity Greek Independents (13 seats). A possible coalition with the Potami as well should not be ruled out.

“I hope the River will now play a key role in any coalition Government […] It is the only party that will be able to tame the Eurosceptic tendencies of both the left and the right,” said ALDE leader Guy Verhofstadt.

Troika belongs to the past

Syriza leader Alexis Tsipras attacked the so-called Troika (IMF, European Commission and ECB). “The verdict of the Greek people renders the Troika a thing of the past for our common European framework.”

Ready to form the first Eurozone government to decisively oppose the Troika’s austerity-driven policies, Tsipras said that Greek people gave a clear, strong, indisputable mandate. “Greece has turned a page. Greece is leaving behind destructive austerity, fear and authoritarianism. It is leaving behind five years of humiliation and pain”, he continued.

The outgoing prime minister admitted his defeat but said he restored Greece’s international credibility.  “I have told the Greek people the truth to the end, I honestly hope my predictions will not be verified, but I had to warn”, he noted, hinting that Syriza will put the debt-ridden country to a collision course with the EU and its international lenders.

In his speech after the election results, he did not express any intention to resign as a party leader but according to sources, there are plenty party members frustrated with his options during the pre-election campaign. “How could we win the elections by spreading fear to our voters?”, told EURACTIV Greece a leading party official on condition of anonymity.

S&D satisfied with the results

The results of the Greek vote seem to have pleased the European Socialists, with S&D chairman Gianni Pittella reiterating what he said in a recent interview with EURACTIV, the need to form a coalition progressive government.

“The Greek people have clearly chosen to stop the austerity imposed on them by Troika’s diktats and ask the new government to bring in fair policies with more social justice,” he said, adding that the renegotiation of the Greek debt, and in particular the extension of the terms of its bailout, should no more be considered “as a taboo”.

“The S&D Group is ready to fully cooperate with the new progressive government, which is expected to seriously fight against tax evasion, tax avoidance and corruption,” he stressed, clarifying that the EU and the member states should both respect the results of the Greek vote.

“It is a historical victory, a great success”, Schulz told Tsipras during a phone call. According to sources, Schulz promised to visit the new Greek PM immediately after his inauguration.

“I will do whatever it takes to help find a commonly accepted viable solution,” he said.

Left-wing parties across Europe also hailed Syriza’s victory. Leftist party Podemos, who are leading the polls in Spain, said that “Greeks finally have a government, not a Merkel envoy.”

Podemos leader, Íñigo Errejón, emphasised that “the policies of unjust and ineffective cuts have been defeated by citizens – despite the campaign of fear. Blackmail has not succeeded in Greece… It will not triumph in Spain either”, he said referring to the general elections in Spain due to take place this year.

>> Read: How Greece returned to crisis

The first reaction came from Berlin. with the president of Germany’s Bundesbank, Jens Weidmann, saying that Greece should stick to its budget commitments. “I hope the new government won’t call into question what is expected and what has already been achieved,” he told ARD television.

Similarly, EPP’s chairman Manfred Weber called Syriza to fulfill Greek austerity and reform commitments and only then “Europe will stand in solidarity with Greece.” Weber said that European taxpayers are not willing to pay for the campaign promises made by Tsipras.

Greece pulled out of a painful six-year recession in 2014 and has tapped bond markets twice after a four-year exile, but investors have begun to fear a return to the days of crisis as the presidential vote looms.

On 8 December, eurozone ministers decided to grant Greece a two-month extension to its bailout, rather than settle for the six-month extension to which Athens had objected. This was a boost, giving the country just enough time to wrap up a delayed bailout review before it exits the programme for good.

Since last summer, polls have shown that an early election would bring the Syriza party to power. The radical left wing party was Greece's biggest winner in the 2014 European elections.